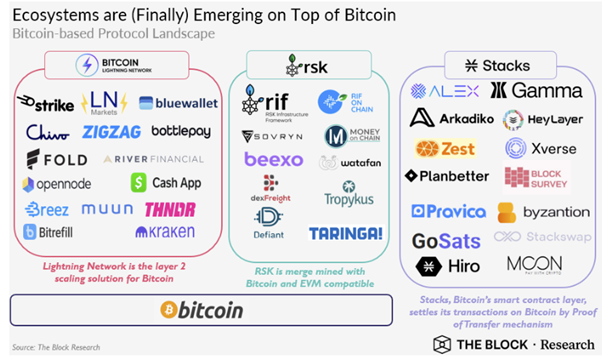 Bitcoin is widely considered to be the world’s leading cryptocurrency. However, builders can use this technology to develop powerful applications, protocols, products, and services. Several ecosystems emerged on top of Bitcoin over the years, and Stacks continues to note tremendous growth.

The Ongoing Evolution of Stacks

Many people may recall Stacks under its former name of Blockstacks. It is a smart contract layer for Bitcoin tethered to the Bitcoin blockchain through a cross-chain consensus mechanism. The hash of the Stacks state is embedded into every Bitcoin network block. More importantly, Stacks is not limited to Bitcoin’s scaling – or lack thereof – as it relies on a different approach to process transactions.

Under the Stacks hood, the network relies on two types of blocks:

One of the emerging partners through Stacks is Hiro, an organization focused on building Bitcoin applications. They, too, see merit in further scaling Stacks through Hyperchains and increasing the throughput even further. Hiro proposes using trusted federated hyperchains to evolve into a trustless hyperchain solution.

The approach by Stacks immediately gained traction since launching its smart contracts in 2021. That resulted in a Total Value Locked increase following the introduction of native-BTC swaps and support for Non-Fungible Tokens. The current Total Value Locked in Stacks hovers near $100 million, most of which resides in the StackSwap DEX and token launchpad.

Moreover, the position of Stacks has been solidified by Trust Machines that recently a massed a warchest of $150M. The Trust Machines team wants to become the “ConsenSys of Bitcoin”, which may sound rather ambitious to onlookers. However, it aims to explore all opportunities brought to the Bitcoin ecosystem, and the initial focus will shift to the Stacks ecosystem. 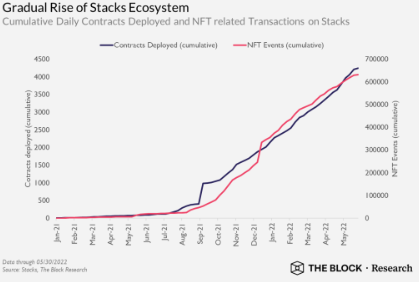 Statistics-wise, the network notes a healthy uptake on smart contracts, NFTs, and other transactions. The coinciding growth of smart contract deployment and NFT events is to be expected, although there will be other use cases for these contracts in the future.

Although Stacks has seen tremendous growth since its launch, there is more work to do. One focal point is introducing developer incentives. Development for and on Bitcoin will only advance when more people are interested in exploring the available opportunities. So together with GSR, OKCoin, and Digital Currency Group, the Stacks Foundation announced a $165 million incentive dubbed Bitcoin Odyssey. That fund is designed to provide financial support for applications and builders who drive Bitcoin adoption.

Another crucial catalyst to consider is how developers achieve peace of mind when building on Stacks. One of its core benefits is maintaining a design approach that doesn’t require changes to the Bitcoin protocol. That also extends to applications getting “stuck”, as they can resolve those issues quickly and seamlessly.