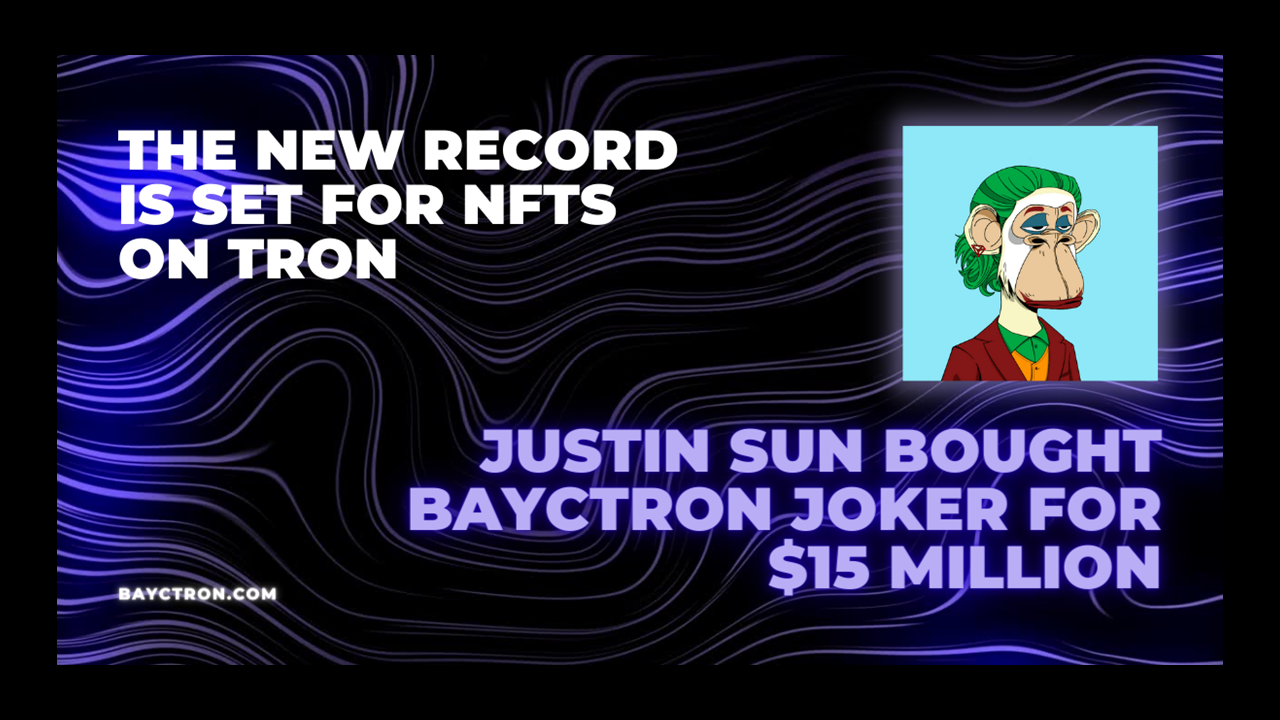 The founder of the Tron network, Justin Sun, has bought a Joker-inspired artwork by Bored Ape Yacht Club Tron (BAYCTron), one of the first and most popular NFT collections on his blockchain today. The price tag? A stunning 150,000,000 TRX or $15 million.

With this transaction, the artwork BAYCT #6666 takes first place as Tron’s most expensive NFT sale to date. A position previously held by another Justin Sun purchase — the Tpunk #3442, which sold for $10,5 million in August 2021. Ironically, his Tpunk was also inspired by the Joker Movie of DC Comics.

Crypto Punk #NFT became the most expensive @Twitter avatars worth $10M! But today, the world record has been renewed again.

I bought a new Ape avatar with $15M worth of #TRX today!

After all, the art of the #NFT avatar is the new artistic showcasing for our generation. https://t.co/Jmam6rv2Xb

The Chinese-born, 31-year-old tech billionaire is a deep believer in the digital art space and, particularly, the use of non-fungible tokens as key enablers of its development. Justifying his latest acquisition, Sun wrote on Twitter: “After all, the art of the #NFT avatar is the new artistic showcasing for our generation.”

While this sudden move by Justin Sun took the BAYCTron community by surprise, it is widely known that this collection has been among the entrepreneur’s favorites alongside Tpunks and Tronmeebits.

The purchased Joker artwork is part of a 10,000 NFT collection released on top of the Tron network earlier this year, and that sold out in just under 72 hours, becoming one of this blockchain’s fastest-selling collections. The TRC-721 artworks are an homage to the original Ethereum Bored Ape collection but incorporate a series of exclusive pieces featuring visual elements related to Tron and Justin Sun.

“This purchase sends a strong message – the Tron NFT landscape is here to stay. This network offers great advantages for artists to run their collections, such as low fees and strong community and network support. We are delighted to hear about Justin’s purchase and expect other minters of our collection will also benefit from the growing secondary market activity in the coming months,” said BAYCTron CMO Carolina Matusso.

This collection also got the attention of APENFT Foundation; a world-class curatorial group focused on identifying and providing support for prospective artists across multiple blockchains, including Tron and Ethereum. In September, APENFT and BAYCTron have signed a strategic partnership to incentivize the development of the project.

??Pleased to announce we have established strategic cooperation with @BAYCTron which becomes another TRON NFT project after Tpunk and Tron Meetbits. It is the first public support object since APENFT announced the establishment of NFT Special Fund. @Tronfoundation @BitTorrent pic.twitter.com/CrQyDCy408

The efforts of APENFT seem perfectly aligned with BAYCTron’s plan. The curatorial organization and Tron Foundation have recently established a $100 million fund to support emerging NFT projects and digital artists in this network.

With direct support from Justin Sun and the strong Tron community, the minting of the BAYCTron Mutant Apes collection is rapidly picking up. As of this writing, the excentric and vibrant Mutants are 35 percent minted.

The new collection is not less exciting than the first. The Mutants include distinctive versions of the Joker, Harley Quinn, Kill Bill, and even Justin Sun. Collectors can still mint Mutant Apes for a fixed cost of 1000 TRX (~ $100) in the hopes that this new collection replicates the same luck as the original Apes.