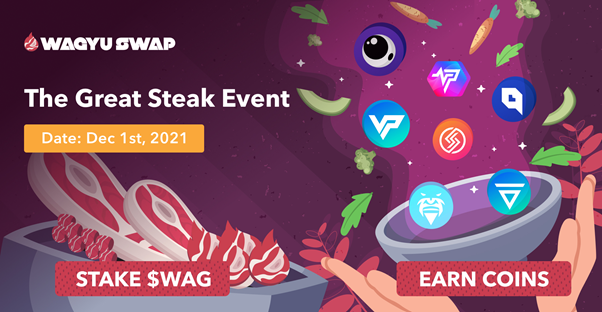 The world of cryptocurrency staking is set to undergo significant changes in the coming years. One example is WagyuSwap, a recently launched decentralized exchange on the Velas blockchain with native staking support. Holders of $WAG tokens will earn different types of rewards through “The Great Steak” – an industry first.

When users seek to stake their favorite crypt assets, they want to maximize their yield as quickly as possible. At the current industry average of 10.44%, there is a solid reason to explore currencies supporting proof-of-stake. Another option is using staking platforms that provide similar functionality to more currencies, even though that might yield lower earnings.

When opting for external providers, those with the highest APY will often win out. Users are compelled to use exchanges, as they can also store their crypto there. Coinbase and Binance are popular options on the “ease of use” front, even if their APY might not be the highest. However, an APY of up to 120% through a DeFi platform like SWAPP Protocol is hard to pass upon – But the dangers are, of course, fluctuation and untrustworthy platforms with no history.

However, there is still room for innovation and change in the world of cryptocurrency staking. The WagyuSwap team has, after bringing the first DEX to Velas, introduced “The Great Steak.” It is in line with the exchange’s overall theme and changes the game on how to reward $WAG stakers. Users will gain access to a variety of hot market coins, creating a precedent in the industry.

What Is The Great Steak?

In its current form, The Great Steak lets users stake their $WAG tokens and earn $SCAR, the native token of the popular Metaverse ecosystem Velhalla.

The great steaking event is live!

The $SCAR rewards are the first step for $WAG stakers. Future rewards will include tokens from other recently launched projects with successful IDOs. The list includes BitOrbit, VelasPad, TRONpad, BSCPad, and many others. Different rewards can attract more users to Wagyuswap and help others diversify their crypto portfolios.

The rewards come from various successful projects on the Velas blockchain. That makes sense, as WagyuSwap runs on that network. It has been an exciting year for Velas, with dozens of projects exploring this technology stack. Moreover, the network provides a high transaction throughput, very low fees, Solidity support, and the Velas Grants Program. That latter initiative offers $100 million in grants to developers bringing innovative projects to Velas.

The Big Steak by WagyuSwap will continue for the foreseeable future. Rotating rewards from staking are a novelty in the industry, and the team has plans to support multiple prominent tokens in the future. It is intriguing to see how developers change staking rewards through this rather simple yet potentially powerful method.

More importantly, this initiative casts a spotlight on the Velas ecosystem. It is the only blockchain with a multi-asset staking reward project to date, and certainly one to watch in the coming months.