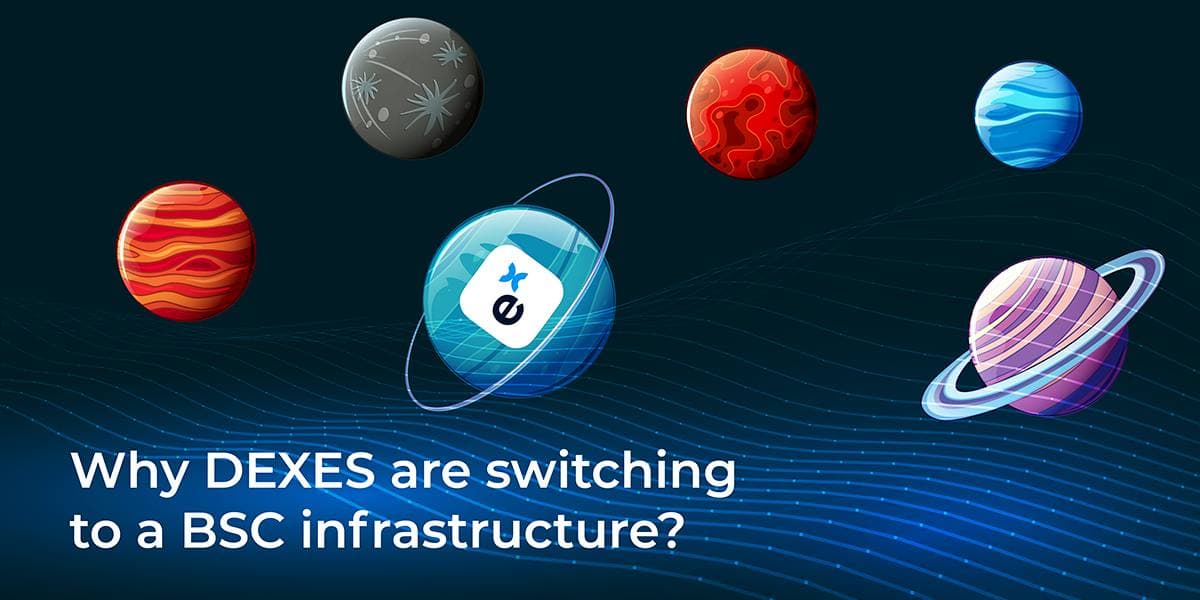 Why DEX’s Are Switching to A BSC Infrastructure

Until the launch of the Binance Smart Chain in September 2020, many decentralized exchanges relied on the Ethereum network for transaction processing among other functionalities. This resulted in an overburdening of the network, leading to congestion, high transaction fees, and slow transaction speed.

The development of the BSC infrastructure stemmed from the need to provide a faster network that is far less expensive than Ethereum. The Binance team aimed to improve the freedom of money by building a holistic community-driven ecosystem where assets flow freely based on users’ needs.

Since the creation of the BSC platform, numerous DEX’s, including expX – a community-driven trading and farming platform that runs on the BSC infrastructure – are leveraging its advantages to provide better services to users.

As of writing, the Binance Smart Chain has nearly $27 billion locked in the numerous applications that exist on the network, and below are the major reasons why DEX’s are jumping ship to join the BSC network.

Transaction costs and network operations are the major determinants that prompt exchanges, users, and developers to pivot from the Ether network and other prominent blockchains to Binance Smart Chain. For instance, users are subject to paying outrageous transaction fees on the Ethereum blockchain during periods of high congestion.

The transaction fees on the Ethereum network went through the roof when DeFi coins started making considerable progress in 2021. As a result, the adoption of decentralized finance reduced considerably as users were trying to avoid huge transaction costs, thereby stifling the growth of many tokens and exchanges.

The BSC infrastructure eased this friction by allowing network users to join projects while paying gas fees that are over 20 times lower than that of the Ethereum network. DEX’s also benefit from this feature as they incur little overhead costs while building protocols, allowing them to focus more on innovation.

EVM stands for Ethereum Virtual Machine and the BSC network algorithm allows full compatibility. This means that all existing Ethereum tools, including Remix, Metamask, Truffle, and so forth can run smoothly on the platform. With this feature in place, Ethereum developers can leverage these tools to create dApps.

Also, existing smart contracts can switch to the BSC network without any hassles, thereby reducing the cost of developing projects that run on multiple blockchains. This level of flexibility puts the BSC network ahead of other blockchains, helping it to remain a major player in the crypto ecosystem.

A Growing and Asset-Rich Ecosystem

Over 139 trading pairs and 110 BEP-2 assets exist on the Binance decentralized exchange, which can easily be integrated into the BSC infrastructure. Also, the Binance chain connects with other prominent cryptocurrencies that run on their individual networks, including Ripple, Bitcoin, Litecoin, Tron, EOS, and Bitcoin Cash.

This feature will allow the Binance team to grow the list of assets and DeFi protocols that exist on the BSC platform, thereby making it easier for DEX’s to list these coins on their exchanges.

It is no news that Binance Smart Chain has witnessed significant growth since its launch. The platform is ahead of Ethereum in terms of DeFi protocol transaction volume. With the continuous increase in traffic within the blockchain, it is safe to say that BSC will maintain this level of growth for the foreseeable future.

DEX’s are plugging into this trend as more investors will be drawn to BSC in the near future, which will in turn increase their revenue. Although Binance Smart Chain sacrificed decentralization for usability, consistent scaling, high network performance, and lower transaction costs will always attract investors, meaning that the platform is yet to see its best years.

Binance Smart Chain employs a consensus mechanism that consists of features from Proof-of Authority and Delegated Proof-of-Stake algorithms. This consensus mechanism runs on a network of 21 validators, providing a high-speed platform for protocols and exchanges to thrive on.

According to recent testnet testing, the network validators process a block of transactions every 3 seconds while also receiving token rewards for network participation. This incentive ensures that the network maintains its stability and transaction speed.

Since the development of BSC, many DEX’s, users, and developers have moved from Ethereum to enjoy cheap and speedy transactions. In addition to this, Binance Smart Chain offers a suitable launching ground for nascent decentralized exchanges that handle smaller trades and transactions.

The adoption of the BSC infrastructure by DEX’s are a smart move as it will give them a competitive edge over their counterparts in the industry.