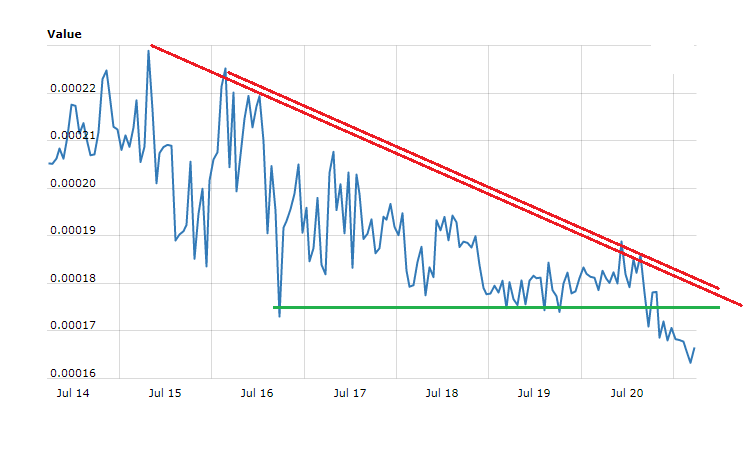 Creditbit price faced further selling pressure against the US Dollar and Bitcoin, and now CRB/BTC is struggling to move above the 0.00018BTC level.

There was no major relief for Creditbit price as it declined below the 0.00018BTC support against the Bitcoin. The price faced a minor increase in selling pressure, resulting in a move below 0.00017BTC. The price traded towards the 0.00016BTC level, and may continue to move lower and test the 0.00015BTC support. However, the decline was mostly due to a sharp rise in Bitcoin price from $2400 to $2800.

On the upside, there are two bearish trend lines formed with resistance near 0.00018BTC on the 7-day chart of CRB/BTC. An initial resistance is just below the 0.00018BTC level, which was a support earlier. Furthermore, the 23.6% Fib retracement level of the last decline from the 0.00021BTC high to 0.000163BTC low might also stop the upside move. Only a successful close above the 0.00018BTC level might call for a recovery towards 0.00020BTC in the near term.

The overall CRB price action is stable, as it moved a few points higher above $0.40 against the US Dollar. The price found support near $0.35 and started an upside move. It is now positioned near $0.46 and looking for a break above $0.50. If all goes well, we may see an increase in CRB price above $0.50 in the near term.

Hourly MACD – The MACD for the CRBIT/BTC pair is gaining momentum into the bearish zone.

Hourly RSI – The RSI for the CRBIT/BTC pair is in the oversold levels.