DECENT Is Getting a Freewallet! 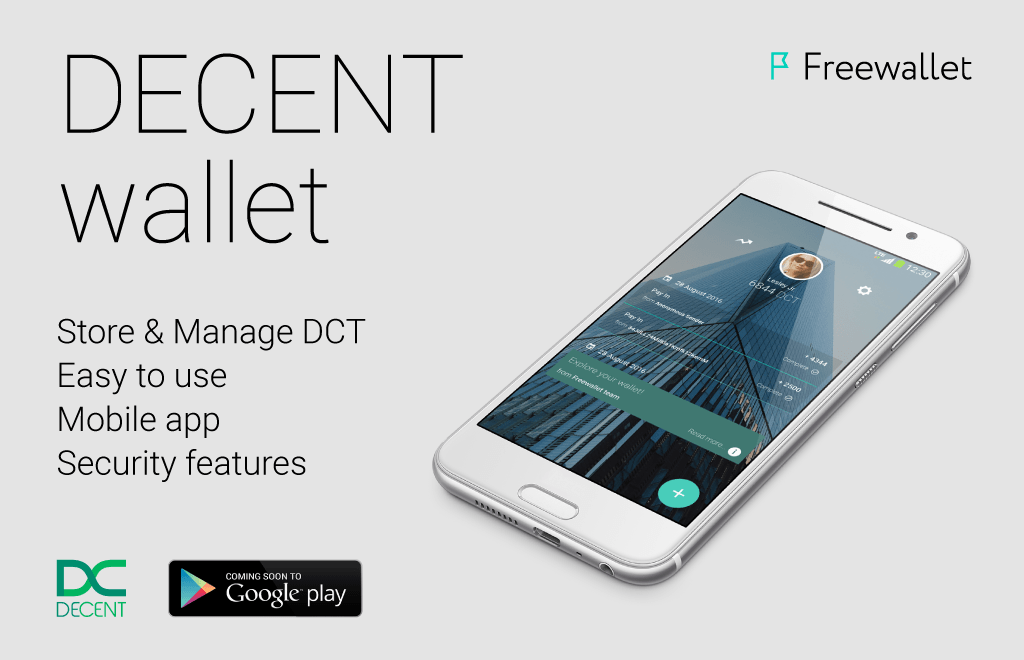 One of the most annoying things that can happen to a cryptocurrency is a lack of convenient wallet solutions, which inevitably leads to most users keep their coins on exchanges. Thanks to DECENT’s latest partnership with Freewallet, however, that will probably not be the case with DCT.

DECENT is a decentralized content distribution system. The original author of any file uploaded to its P2P storage system is recorded in the DECENT blockchain, and if it is intended for sale, it can only be decrypted by those who’ve sent enough DCT tokens. By removing middleman fees, disabling censorship and protecting users with pseudonymity, it provides a better solution than things like YouTube and Netflix with its streaming capability.

Freewallet is a company that develops mobile cryptocurrency wallets, lightweight clients with no need to sync to the blockchain and a keep-it-simple design philosophy. Although Bitcoin is obviously a primary focus, they’ve been adding others including Ethereum to the family since their inception this year. Their features include built-in exchanges and cold storage, and they have been experiencing impressive organic user growth.

A large reason for Freewallet’s success has been their ability to maintain a good relationship with Apple, keeping most of their apps on the App Store. Back in 2014, they were actively removing wallets as well-known as blockchain.info, and they forced Jaxx to remove DASH support just recently. Although the App Store has less active downloads, its users tend to have significantly more spare money, as their relative revenue figures clearly show. Banned cryptocurrencies therefore suffer reduced market volume.

Initially, however, Freewallet’s DECENT app will release only on the Play Store, and allow the storage and transfer of DCT tokens. Content management might be added later down the road when the DECENT platform is developed enough for commercial use, but for now their target consumers are DCT investors. The wallet will probably be released before the end of 2017, according a source inside DECENT, but there’s no confirmation yet from Freewallet.

Still, it will make a great place for people to store their coins after participating in the DCT token crowdsale, which starts tomorrow. The price will increase from 5,000 to 3,000 DCT/BTC over its 8-week duration, providing incentive to get in early, with 70% of proceeds going to development and operations, 10% to marketing, and the remaining 20% to contingency blockchain development and legal funds. DECENT’s CEO has been touring countries like China in anticipation.