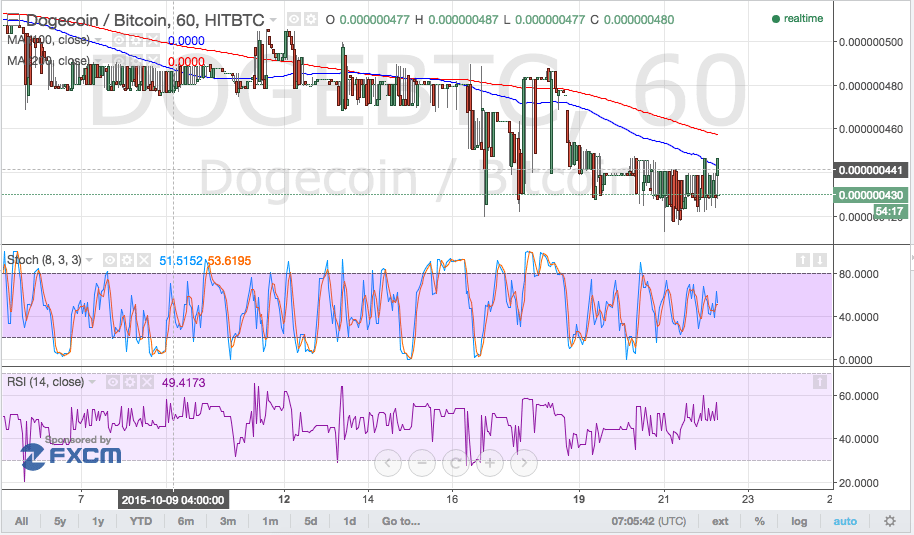 Dogecoin price is currently stuck in a tighter short-term range but could be ready for a breach of support, as this has been the case in the previous consolidation.

Dogecoin price has made a quick pullback to the 100 SMA, which has served as a dynamic resistance area during the downtrend. This short-term moving average is below the longer-term 200 SMA, indicating that the path of least resistance is to the downside.

Other technical indicators such as stochastic and RSI are less decisive. Both oscillators are on middle ground, barely offering any strong directional clues for the time being.

Dogecoin price is finding short-term resistance at 44 Satoshis and support at 42 Satoshis, with an upside break of the range likely to take it up to the next resistance at 46 Satoshis or the 200 SMA.

On the other hand, a downside break of support could spur a move to the psychological support at 40 Satoshis, which also coincides with a longer-term area of interest.

Tags: dogecoin pricedogecoin technical analysisDogecoin trading
Tweet123Share196ShareSend
Win up to $1,000,000 in One Spin at CryptoSlots