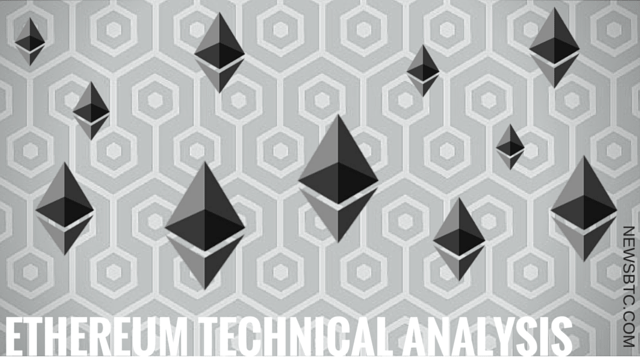 Ethereum Price Technical Analysis – Make it or Break it

Ethereum price is under a bearish pressure, as buyers failed on many occasions to break a major resistance trend line.

Can it be broken?

The Ethereum price was seen struggling many times to break a crucial bearish trend line formed on the hourly chart. There were at least 6-7 attempts to clear the highlighted trend line, but every time buyers take the price higher, they fail to break the trend line. Now, the 100 hourly simple moving average is also aligned with the trend line, so we can say that there is a major resistance forming around 0.00390BTC. Moreover, the 61.8% Fib retracement level of the last drop from 0.0042BTC to 0.00348BTC is also positioned around the trend line to act as a barrier for buyers.

If the price manages to settle above the trend line and resistance area, then the next hurdle could be around the 76.4 Fib level. Any further gains could take the price towards the last swing high of 0.00420BTC. There are a few bearish signs to note, like the hourly RSI is below the 50 level, which can encourage sellers moving ahead.

If the price moves lower and fails to trade higher, then an initial support can be seen around the Lower Bollinger Band sitting around 0.00375BTC. A break below it could take the price towards the last low of 0.00348BTC.

The hourly RSI and MACD are in the bearish zone, pointing more losses.

Tags: ethereumEthereum Price analysisEthereum Price Technical Analysis
Tweet123Share196ShareSend
BitStarz Player Lands $2,459,124 Record Win! Could you be next big winner? Win up to $1,000,000 in One Spin at CryptoSlots