What a day it’s been for the Bitcoin, Ethereum, and crypto markets. After days of consolidation, the leading cryptocurrency surged higher from its sub-$10,000 slumber over the past 48 hours. The asset now trades for $11,000, up around 10% in the past 24 hours alone.

Unfortunately, with such market volatility, there have been some mishaps.

Just minutes ago, Bitcoin, Ethereum, and many other cryptocurrencies experienced a flash crash. Bitcoin plunged from $11,300 to $10,800 in the span of literal minutes while altcoins followed suit.

ETH faltered especially hard during this drop lower. According to one trader, the asset briefly traded at $300 on BitMEX as long positions presumably were stopped out of their positions, leading to a rapid decline. 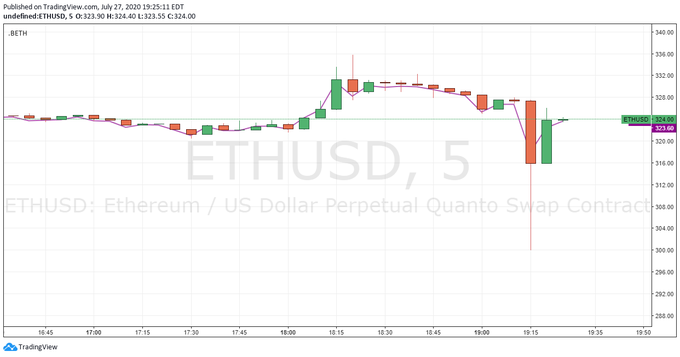 Ethereum has returned to $325 as buyers have stepped back in, only cementing how crazy these market conditions are.

Even after this volatility, the asset is up by approximately 35% in the past seven days.

Although ETH has been underperforming Bitcoin over the past 24 hours, many remain long-term bullish on the asset due to its fundamentals.

Canadian digital asset manager/fund provider 3iQ recently announced that it has filed a prospectus to list an Ethereum fund on the Toronto Stock Exchange:

“3iQ Corp. is pleased to announce that The Ether Fund (the “Fund”) has filed with the securities regulatory authorities in all of the Canadian provinces and territories of Canada (except for Québec) and received a receipt for its preliminary prospectus in relation to an initial public offering.”

Also positive for the asset is the launch of ETH 2 and growth in the decentralized finance (or “DeFi”) sector.