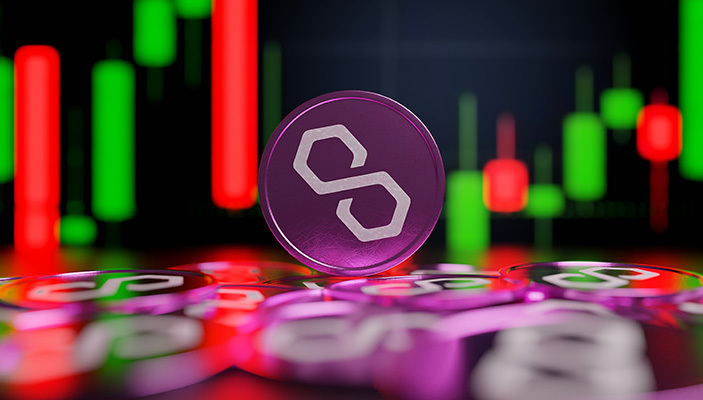 MATIC Price Surges More Than 6%, Is It Finally A Trend Change?

MATIC price has witnessed a rally as the coin almost appreciated by 7% over the last 24 hours. MATIC (Polygon) had been trying hard to move past its immediate trading session for a while, and now it has finally been able to do that.

It is, however, too early to call this a trend change.

The bulls have to trade above the current price mark in order to move past the $0.90 price ceiling. A move above the $0.93 mark will further strengthen the bulls in the market.

The technical outlook of MATIC has moved from bearish territory to a bullish one.

Buyers have taken over the market, as seen in the indicators. If consistent buying strength is present, then a rally to the $0.93 level can be possible.

In case buyers fade over the next trading sessions, MATIC price can slump considerably and trade around the $0.70 price mark. If demand remains high, the trip to the $1 cannot be completely ruled out.

Polygon (MATIC) was trading at $0.86 at press time. After weeks of consolidation, the bulls finally managed to push the price of the asset north.

MATIC’s immediate resistance stood at $0.90. If demand remains consistent, the MATIC price may test the aforementioned price level in the coming trading sessions.

Only if MATIC is able to break past the $0.90 level could the bulls aim for $1 as well. A trend reversal can happen if MATIC moves past the overhead price ceiling.

On the other hand, a fall from the current price mark will bring MATIC down to $0.77. This level would again strengthen the bears.

The amount of MATIC traded fell in the last session, pointing towards a fall in selling pressure.

The 7% appreciation over the last 24 hours brought back buyers into the market, as seen in the technical indicators.

The Relative Strength Index shot up from beneath the half-line and was above the 60-mark, which is considered bullish as buyers dominate the market.

MATIC price was also above the 20-SMA line, indicating that there was an increase in demand for the coin. MATIC above the 20-SMA meant that buyers were driving the price momentum in the market.

Related Reading: Ethereum Shaves Off A Quarter Of Its Price As Whales Dump $4 Billion In ETH

The asset also displayed a buy signal which means that MATIC might register further gains in the next trading sessions. Awesome Oscillator indicates the current price trend and momentum of the asset.

AO turned green and above the half-line which could be considered a buy signal on the chart.

Chaikin Money Flow depicts the capital inflows and outflows of the asset.

CMF was positive as the indicator was seen above the half-line, displaying that the asset had registered more capital inflows compared to outflows at the time of writing.

Related Reading: Polygon (MATIC) Eyes $1 After Successful Breakout; Will Bulls Push For A Retest?
Tags: MATICMATICUSDmaticusdtPolygon
Tweet123Share196ShareSend
Win up to $1,000,000 in One Spin at CryptoSlots