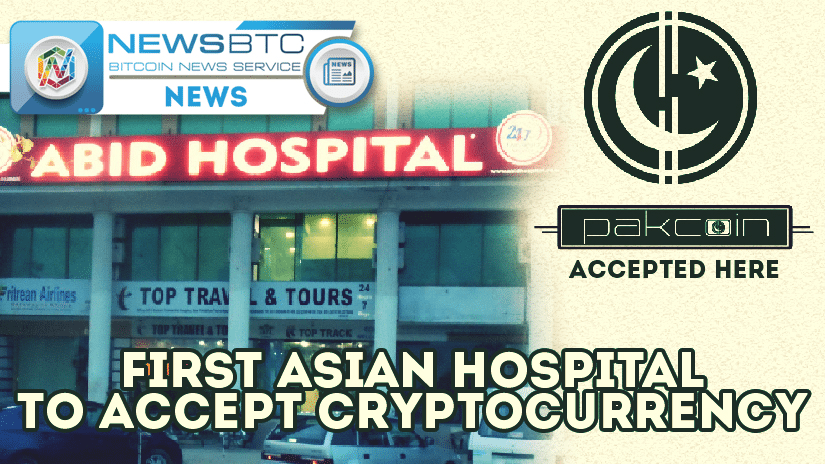 The healthcare industry has been actively exploring the use of cryptocurrency technology and not the cryptocurrencies itself. While there are a select few places in the world where one can pay for their treatment with Bitcoin, Abid Hospital in Pakistan has become the first Asian healthcare provider to accept cryptocurrency payments.

According to local media reports, the Blue Area, Islamabad-based Abid Hospital has announced the acceptance of PakCoin, a region-specific cryptocurrency created along the lines of Bitcoin. The relatively new hospital started in 2015 has been known for its technology adoption. The multispecialty hospital, offering round the clock healthcare services including emergency room and critical care has also decided to offer an additional discount for those opting to pay with PakCoin.

Healthcare is one of the most expensive services around the world. While Asian countries are known for their inexpensive and efficient healthcare systems, the costs are still high according to local standards. In such a scenario, any discount is good for the patients. The 20 % discount makes Abid Hospital an attractive option for patients. It will also help drive the adoption of PakCoin among the visitors.

Abid Hospital is not new to discount offerings. The institution has been offering 50% discount on frequently used services like the OPD (Out- Patient Department) and lab tests. Also, the hospital has special packages for Islamabad’s police and traffic police, with a discount rate of 20%. The same is also applicable for admitted, in-patients as well.

PakCoin holds the distinction of being the country’s first cryptocurrency. It is based on Litecoin and can be used not only in Pakistan but across the world. The creators of PakCoin have fixed the total supply of the digital currency at 182 million tokens, out of which 10 percent is already pre-mined. The cryptocurrency platform is also planning to give away 50 PakCoin tokens each to over 150,000 people in the coming days.

The popularity of PakCoin is currently increasing within the country as many people continue to adopt the digital currency and soon it may emerge as a leading virtual currency in Asia. Like Abid Hospital many other healthcare services providers may also join forces and do something similar, driving adoption even further.

Predict the price of BTC & AAB and win up to 5,000 USDT!
Tags: abid hospitalbitcoinBitcoin NewsNewspakcoinPakistan
TweetShare