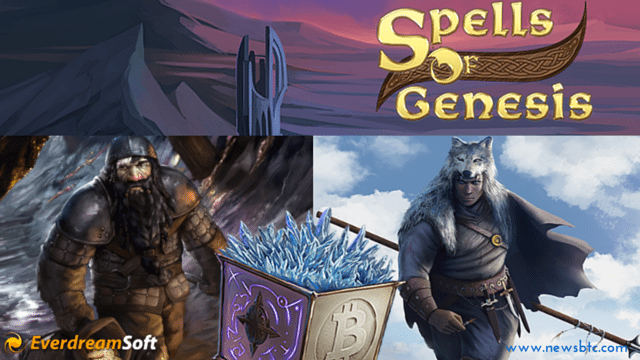 Spells of Genesis was the first serious use of the blockchain by a video game company, whose cryptocurrency crowdsale was intended to replace a traditional investment round. This constituted not only a precedent but an experiment, the results of which could shape the future of the gaming industry. Thankfully, it was a huge success.

The game is being developed by EverdreamSoft, based out of Switzerland. Like Moonga before it, it is based on a collectable set of battle cards and played turn-by-turn. While Moonga is a pure strategy game, however, SoG’s gameplay has been revamped in action-arcade style, and now requires timing and coordination.

Unlike other online card games–which use central servers to track who owns which cards–EverdreamSoft’s cards are issued on the Bitcoin blockchain as Counterparty assets, resulting in true, irrevocable ownership. Also issued are BitCrystals, a cryptocurrency integral to the Spells of Genesis economy which also functions as a fundraising vehicle.

EverdreamSoft’s orginal fundraising goal was 730 bitcoins, but they managed to raise 240 BTC in the first 2 hours and 630 BTC in the first 3 days. They set extended goals requiring them to add features like PVP and smart contracts to the game, and have raised 913 BTC as of the time of this writing.

The community response has been very positive, and EverdreamSoft will receive the funds in a series of milestones. An early beta is expected in October, several playable levels by February, and a completed game in April. Erik Voorhees and Jeremy Johnson will be the key signatories of a multisignature wallet that ensures the bitcoins are not released until these goals are met.

There are 60,000,000 BitCrystals total, with around 75% remaining. This means that the crowdsale cannot last forever, but it has already made waves in the video game and blockchain industries.