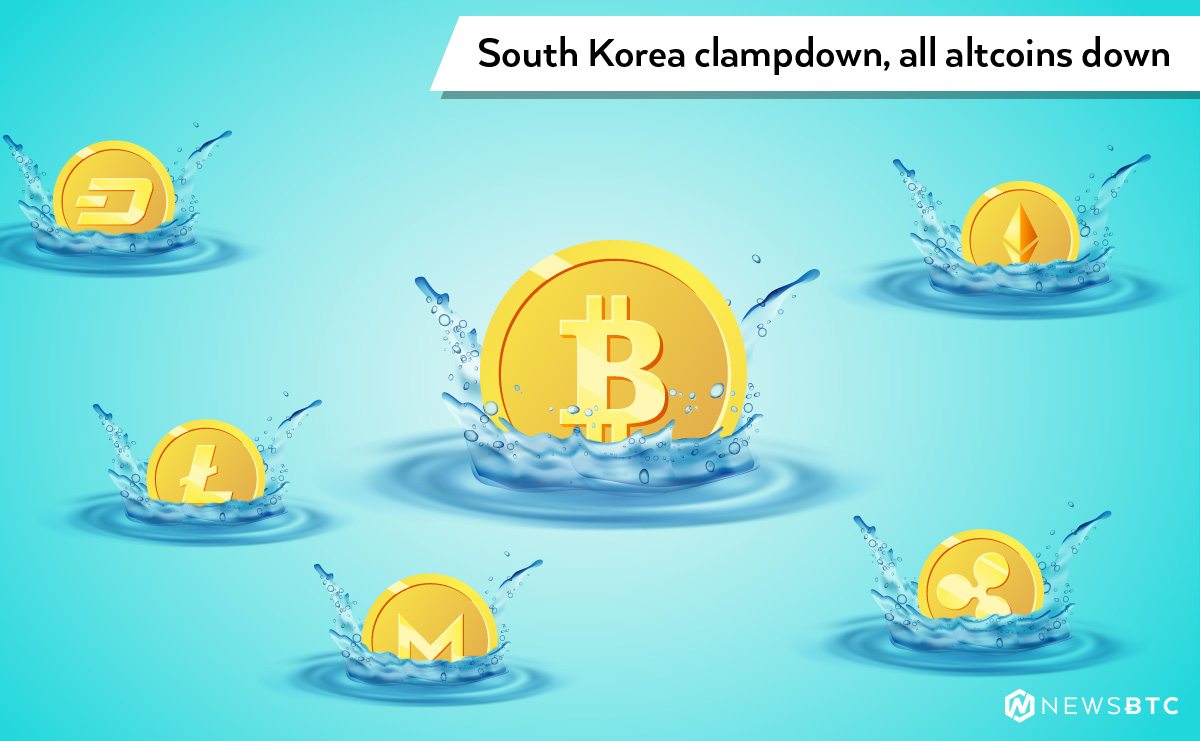 After a brief day or two of recovery, all cryptocurrencies except a couple were back in the red again during the Asian trading session. Bitcoin showed a strong rebound but failed to break resistance below $17,000 yesterday and fell sharply back to $14,700 where it currently trades. Likewise Ethereum, Bitcoin Cash and Litecoin have all slid back around 12% on average at the time of writing.

The cause could be a big selloff in South Korea following further regulation on crypto-exchanges by the government. It has been estimated that exchanges in the Southeast Asian nation are responsible for over a quarter of the global volume. A major issue Korean traders face is the discrepancies in prices which can be much higher on local exchanges than in other countries.

The government has taken a stance and issued this statement today;

“The government had warned several times that virtual coins cannot play a role as actual currency and could result in high losses due to excessive volatility,”

It has vowed to ban opening anonymous accounts for crypto trading and enforce that exchanges take further steps to ensure transparency. Currently, anyone with a mobile phone and a bank account can sign up to trade on Bithumb. Most exchanges require photographic ID to increase deposit or withdrawal limits, this is certainly nothing new. The exchange responded by stating to Reuters that the right set of regulations would nurture virtual currencies and it is something that Bithumb supports.

South Korea also plans to introduce new legislation to grant it more control over exchanges and the ability to close them if needed. According to the statement, this directive came from the justice ministry. A crypto tax was previously mulled by the South Korean government to tackle what it sees as the risk of excessive speculation.

Banks within the country are also backing off with some rescinding Bitcoin-based reward programs and others closing virtual accounts used to trade with exchanges. The resultant selloff started a few hours ago across Asia however as we have seen time and time before things usually bounce back.

If China’s ICO ban could not keep crypto down for long it is unlikely that more regulation from South Korea will. Decentralizing finance and technology will always go against governments and banks which need the complete opposite to maintain control.