XLM Slips, Will Stellar-IBM Partnership Be in Tatters After Lund’s Exit?

The exit of Jesse Lund, the global head of blockchain for financial services and digital currencies, and CTO Stanley Yong of IBM could jeopardize their partnership with Stellar. Even though XLM is bullish, participation is low. The only pass for higher highs is if prices rally past 13 cents.

The success of any blockchain depends on what it brings on the table. That is, use case. If it finds that and the network benefits from the network effect, then whether the project goes forward or not is heavily reliant on well-oiled partners. In the case of Ripple, more than 200 global banks are part of the process. Because of that Brad Garlinghouse and team, has the impetus for building infrastructure that will replace SWIFT as a real-time global payment platform.

Meanwhile, Stellar as a competing platform, has the backing of an experienced, century-old phenomenon in IBM. Better known as Big Blue, the American giant prides in the World-Wire. Out of the gate, Stellar now supports 42 different currencies from 72 countries thanks to the involvement of IBM.

Their objective is outright: Battle it out with Ripple and onboard as many banks as possible to their network. Enabling this is innovation and determination. Already, six banks will be launching stablecoins on the Stellar network. However, all this is under threat following the departure of CTO Stanley Yong and Jesse Lund. They were instrumental in pushing World Wire on the Stellar network. 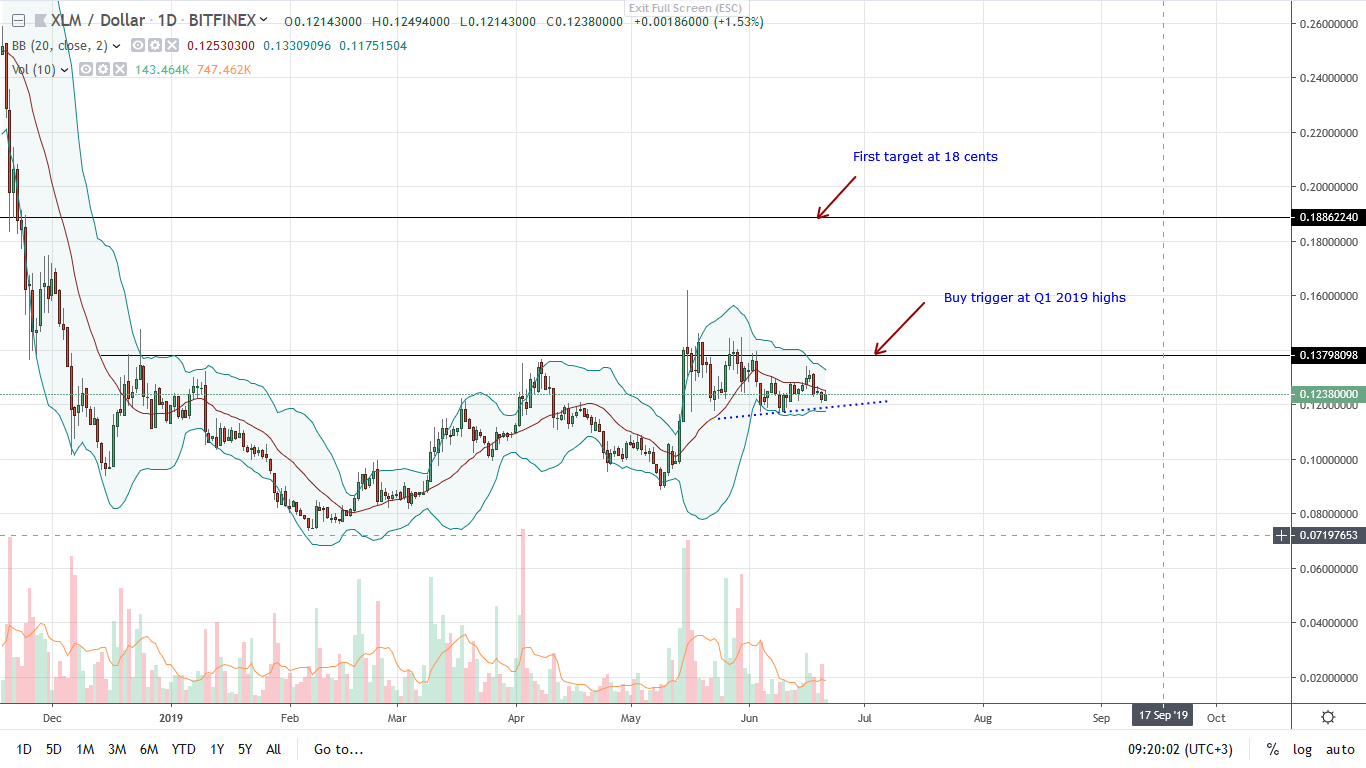 Presently, XLM is steady, off the top ten and struggling to keep up. Replaced by ADA and within range from TRX, XLM market cap is susceptible to another Flipping. All the same, there is an opportunity for savvy traders.

Trading within a bullish breakout pattern and ranging below Q1 2019 highs, XLM is technically bullish. As such, aggressive traders can buy the dips as long as prices are above 11 cents or June low.

Meanwhile, conservative traders keen on trading clear signals, any close above 13 cents or May high is a chance. In that scenario, every low would be a buying opportunity with a modest target at 18 cents. Ideally, accompanying this upsurge should be high trading volumes confirming buyers of early May. That will set the motion for further gains with traders aiming at 30 cents.

From above and as reiterated, any upsurge above 13 cents ought to be with high participation. For this reason, the over-extension of May 16th leads this bar. It has high trading volumes of 5.45 million. Therefore, breaks above 13 cents or 11 cents (nullifying this trade plan) ought to exceed 5.45 million.

Tags: jesse lundstellarStellar LumensWorld WireXLMYang
Tweet123Share196ShareSend
BitStarz Player Lands $2,459,124 Record Win! Could you be next big winner? Win up to $1,000,000 in One Spin at CryptoSlots

Stellar Network Processes 1.8 Billion Transactions, Was 2021 Its Best Year Ever?

How Stellar Will Host Ukraine’s CBDC Pilot Test With Tascombank

Why MoneyGram Launched A Bankless Payment Method On Stellar