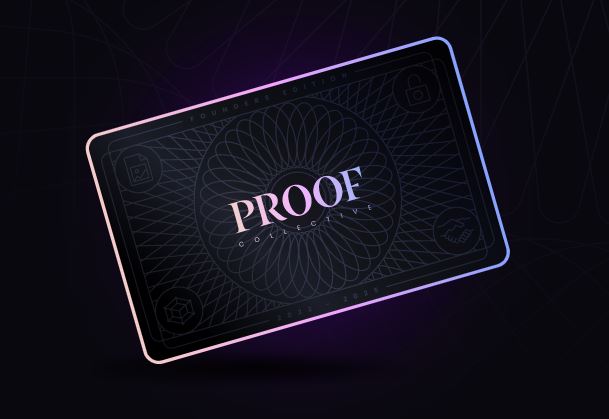 Blue Chip NFTs 101 – What Is The Proof Collective And Who’s Behind It?

The mysterious organization known as The Proof Collective defines itself as “a private members only collective of 1,000 dedicated NFT collectors and artists.” To join the Proof Collective someone would have to, you guessed it, own their NFT. So, in theory, anybody can be a part of it. In practice, though, the floor price for one of their passes is around 88 ETH at the time of writing. The size of the investment keeps the undesirables away.

The Proof Collective is all about NFTs. Because it’s the law, they run a private Discord in which you can probably receive the biggest alpha available. The organization also provides NFT info via its social media, produces a podcast in which they interview the biggest names in the NFT world, and, reportedly, owns a huge NFT collection.  At least its members do.

According to the website, those members own 153K NFTs, including 148 CryptoPunks and 817 Bored Apes. Who are those members?  We wouldn’t know for sure. Its founders are Kevin Rose, of Diggs fame, and illustrator Justin Mezzell. And it has been widely reported that the Proof Collective gave free memberships to digital artist Bleeple and motivational speaker and NFT millionaire Gary Vee.

In the following video, one of the Proof Collective founding members, Internet legend and Diggs co-founder Kevin Rose, says. “This is the very beginning of what’s going to be a multi-decade journey to build a new media company.”

He also promises that Proof will combat FUD that comes with success by constantly shipping product. Moonbirds holders can expect benefits, airdrops, and physical objects related to the nascent brand.

What Is The Proof Collective?

The Proof Collective NFTs’ main benefit is the world’s most valuable currency: information. Besides a social club of sorts, the organization believes in “group bottoms-up-driven research.” Plus, some members are early NFT adopters that own all of the projects you hear about on social media and are actively looking for the next one. If you play your cards right and the gods smile in your direction, that  Proof Collective NFT might pay for itself in a few months.

The organization takes things one step further, though. As “a new media company,” The Proof Collective produces and releases its own NFT masterpieces. Their first product where the Grails, which mint was solely for the members of the organization and had the slogan, “20 artists. 20 unique pieces of art. Artist names revealed after the mint.” So far, they’ve unveiled art by Tyler Hobbs, Claire Silver, Mike Shinoda, Larva Labs, Rachel Ryle, and Gary Vaynerchuk among others.

The Proof Collective’s second product was the incredibly successful Moonbirds, who conquered the world on a bearish market. “There are a total of 10K Moonbirds, they were issued under the ERC-721 standard on the Ethereum blockchain. The mint price for each one was a whopping 2.5 ETH. That means that, at current prices, the Proof Collective made over $70M on that first day,” our report said.

At the moment, the floor price for the Proof Collective NFT is 88 ETH, which at today’s exchange rate is more than $200K. And the prices of the listed for sale ones go up to a whopping 700 ETH. Currently, these NFT tickets sit at #17 in Cryptoslam’s “NFT Collection Rankings by Sales Volume” list. The project has sold more than $800K in the last 24 hours and more than $52M since the Proof Collective’s creation. We Need A Little Controversy

Look, they don’t have any proof (no pun intended), but NFTethics suggests there’s something shady going on. “Some mentioned that we should check the purchases of proof collective, as many wallets only contains the proof collection and the floor is now 88 ETH. Wash trading is so common (…) these days that it’s not even noteworthy anymore.”

Could the Proof Collective have done that? Maybe. But there’s no evidence, all of this is mere speculation.

The Proof Collective entered the NFT space with a bang. The space has never seen an ascension this fast and a track record this clean. So far, they’ve done everything right. Does that guarantee future success? No, it doesn’t. But it certainly is impressive.