Midex announced the launch of its Tokensale 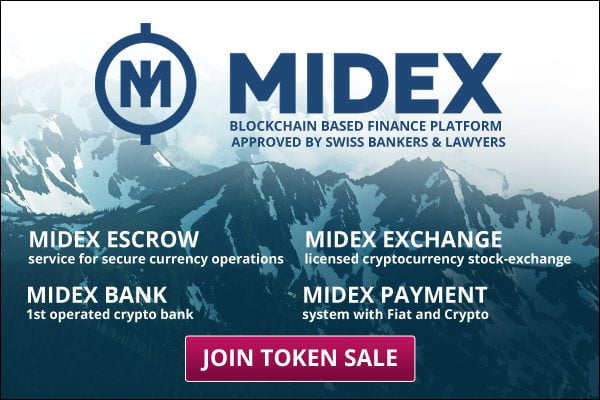 Midex announces the launch of its tokensale to fund the continued development of its first innovative blockchain-based financial platform for working with crypto- and traditional currencies. Midex has no extant analogs in the world and offers revolutionary solutions regarding the consolidation of the world of cryptocurrencies and classical finance systems. The combination of neural networks and smart-contracts controls the majority of processes within the Midex ecosystem, thus eliminating the possibility of mistakes and compromises.

Midex facilitates safe and reliable connections between cryptocurrency and traditional financial infrastructure. In traditional terms, it would be called a ‘financial group’. In the world of future technologies, however, Midex is a host platform for:

The top project of Midex is already operating Exchange. Midex Exchange is a platform for all types of operations with cryptocurrency. It has licenses in the UK, Estonia, and Japan (или пишем, что еще нет). To create the exchange, a powerful international team of lawyers, Swiss bankers, and well-known blockchain enthusiasts are involved. The peculiarity of the exchange is its blockchain account with the record of all transactions made on the exchange – for absolute transparency of the bidding process. This product is the first service that allows working with crypto-exchanges from one interface using private API keys. Now you can try out the demo version of this product at en.midex.com.

In the near future, the company anticipates receiving the banking license and is planning to open our payment system.

Midex infrastructure is based on the module principle. It’s scalable and highly compatible with various networks. Modules are based on the multi-level decentralized storage model. Cryptography and reliable identification and authorization methods guarantee the security of operations.

‘Midex is exactly what all the crypto market was waiting for. No word saying. Midex and its technologies are really impressive, and the team – the international and experienced professionals’, says Midex CEO Dmitry Machikhin.

Now Midex runs the Tokensale until April, 15. The total token amount is 75 000 000 and price is from 0.00084 ETH per MDX token. Midex accepts over than 50 major cryptocurrencies including Ethereum, Litecoin, Dash, Monero, Bitcoin Cash and etc. to buy MDX tokens.

During VIP-presale has already raised more than 3619.40 ETH.