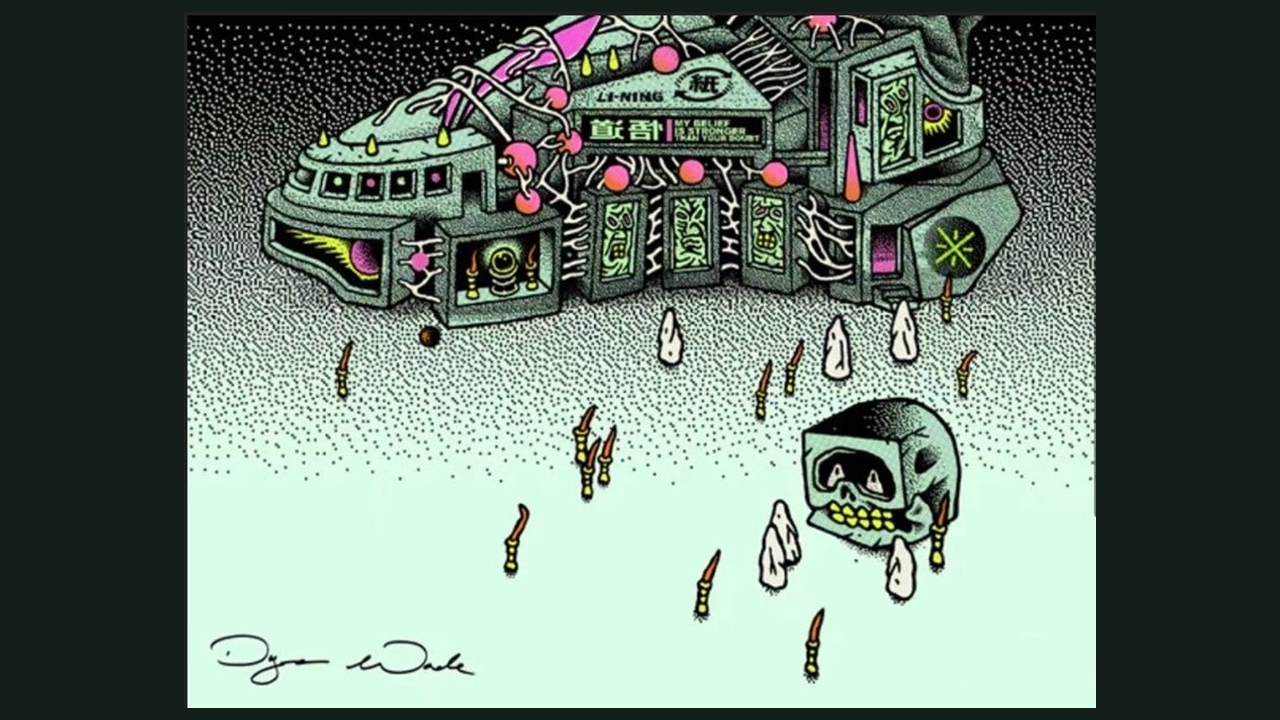 Designer of the Li-Ning “Way of Wade” created NFT (Wizard Shop in ESSENCE), Had an Auction on Poly International Auction with the Final Transaction Price of RMB 1,127,000(USD$174,458)

Sep 26, today the Surrealistic NFT Work of the Magic World under the “Essence” Series, released by Designer of the Li-Ning “Way of Wade” Big Joe, has successfully completed the NFT debut at Poly Auction and achieved great success.

Wizard Shop in ESSENCE – the “Magic World of Surrealism”

The work bears both the “upper ribbon” structure that incorporates the elements of vines and crystal balls, and the artistic shape of lighted magic candles. All elements in this fantastic design reveal the huge magic world of future trends in the designer’s imagination. “Here, you can easily get inexhaustible artistic ideas for all your gear needs, and you can even connect to the future via the animal face totem on the side of the shoe. The transformable widget on the shoe body, when unfolded, becomes a shop reception hall with door boy for high-order wizards only…”. This is the Wizard Shop in ESSENCE created by Big Joe, which is also the future wizard world of surrealism imagined by Big Joe. This world, a seemingly virtual space independent of the real world, reflects and affects the real world with its powerful recognition of digital consciousness and art form based on multiple dimensions.

It is worth mentioning that the NFT work titled Wizard Shop in ESSENCE displayed at the Poly auction house bears the electronic signature of Dwyane Wade, the senior American NBA celebrity. Wade’s signature not only drives up the final transaction price to RMB 1,127,000(USD$174,458), but also further elevates the collection value of this encryption artwork.

When the NFT artwork shines in the art auction market, it actually has become a driving force to change the art market to some extent. With ESSENCE as the carrier and supported by the bold exploration of new forms of technology and art, LI-NING is bound to open a new chapter of the trends in sports art.

Wizard Shop in ESSENCE is a new attempt by Designer Big Joe, and the first NFT sneaker artwork of LI-NING. In the future, by virtue of the value extension in broader dimensions and richer forms, the phenomenal fashion art icons represented by ESSENCE series will enable LI-NING to explore more possibilities of sports trends along with the advance of technology as well as updates and iterations of the fashion trends.

As the blockchain industry becomes increasingly mature over time, NFT (Non-Fungible Token) art based on blockchain decentralization has stood out from the crowd rapidly in recent years for its outstanding peculiarities, such as inseparability, irreplaceability and uniqueness. Survey data of industry organizations indicates that the total market value of NFT reached USD210 million in 2019, which is expected to rise by 50% and reach USD320 million in 2020, and continue to grow up by 125% and reach USD710 million in 2021. This symbolizes its huge development space.

From the perspective of sports, LI-NING has always kept exploring more possibilities of sports trends. It showcases its interpretation of traditional Chinese culture and modern trends, and fully incorporates elements in various areas like science and technology as well as art into original design for interactive recombination. When the “anti-fake certificate” NFT in the digital world encounters hybrid digital art with more dimensions, and the spirit connotation and original design concept of LI-NING are absorbed, the brand-new NFT encryption artwork comes into being. “ESSENCE Master” Big Joehas created a new surrealistic artwork of the magic world called Wizard Shop in ESSENCE based on the top trend icon “ESSENCE”. This work is a breakthrough in NFT art.

In 2018, LI-NING showed its attitude of original design and fashion influence to the world at global top shows with the theme of “ESSENCE”. Specifically, ESSENCE 2 ACE, which reshapes of classic in deconstruction style, was favored by sneaker lovers all over the world upon its launch and became the symbol of domestic sneaker.

There is no doubt that the shoe series labeled with Chinese character “Wu Dao” is the new interpretation of LI-NING’s brand value, and moreover, it is the catalyst enabling LI-NING to get rid of stereotype and successfully win the attribute label of sports trend.

Big Joe Designer of WAY OF WADE and ESSENCE, has contributed a range of acclaimed series that are crucial to LI-NING’s comprehensive transformation into a sports fashion brand. The most widely known ESSENCE series has not only become one of the most influential series in the history of LI-NING, but also propelled Chinese sports brand to the forefront of the world trends.