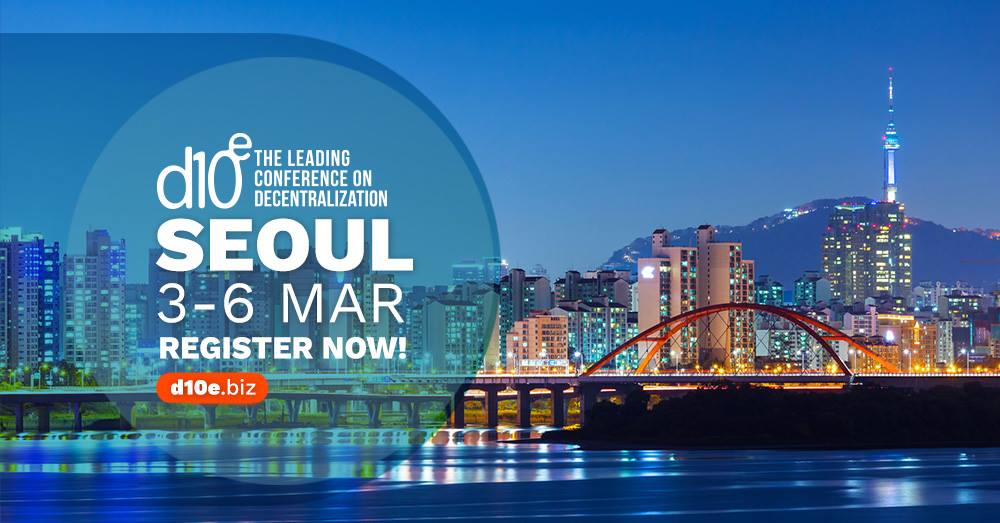 Los Angeles, CA—February 28, 2018 —The Leading Conference on Decentralization, d10e, will hold its 17th global edition in Seoul, Korea, March 3-6, in the COEX InterContinental Hotel’s Harmony Ballroom. More than 500 local and international blockchain experts, investors, and entrepreneurs will be featured at the conference.

d10e has championed decentralization since its first conference in Singapore in May of 2014, and since then has organized 16 editions around the world in Amsterdam, Bucharest, Cayman Islands, Davos, Gibraltar, Kyiv, Ljubljana, Silicon Valley, Tel Aviv and Warsaw. The Seoul edition will be organized in partnership with Double Chain, a South Korean blockchain company.

The event begins with a VIP welcome party on Saturday, March 3rd with members of the Blockchain Investors Consortium (BIC) and top innovators in the blockchain space from over 40 countries. Sunday, March 4th, is reserved for a cultural excursions to major landmarks in the heart of Seoul while enjoying networking with crypto investors and entrepreneurs.

During the first day of the conference, on Monday, March 5th, experts will share their experience of integrating blockchain to accentuate governing, banking, trading, media, healthcare and many other sectors. Panel participants will discuss the development of innovative blockchain products from idea to launch. The second day of the conferende, March 6th, will feature a competition between 20 startups and the top three winners will go home with an investment prize of $250,000. Startups will also be competing for the Media  and Audience Awards.

Mike Costache, founder of the BIC, CEO of d10e, and Managing Partner of KrowdMentor stated, “We are honored to have the support of Minister Daeje Jin, president of the Korean Blockchain Association, and Professor Inho of Korea University who will deliver the opening speech and give in-depth lectures on the latest blockchain technologies.”

This edition of d10e will feature talks by prominent South Korean investors and businessmen. Of particular interest will be the introduction of the blockchain-based IoT platform and business plan for Double Chain by its CEO and Managing Director, William Samgu Chun. Brock Pierce will be also speaker at this event, along with David Orban, Ruslan Gavryliuk, Galia Benartzi, Craig Sellars, Eric Gu, Eddy Travia, and other important speakers from the blockchain space. See the list of speakers and full agenda on http://d10e.biz/seoul-2018.

d10e conferences have been at the heart of disruptive fintech, blockchain, and decentralized technology since 2014. Our events have been hosted in Amsterdam, Bucharest, Davos, Gibraltar, Kyiv, Ljubljana, San Francisco, Singapore, Tel Aviv, and Warsaw. The brand d10e is the leading conference on decentralization, exploring the future of fintech, ICOs, blockchain, the sharing economy, the future of work, and disruptive culture.

Double Chain conducts researches on Blockchain that is one of the core technologies of the 4th industrial revolution and will give a great impact on our society by offering secured future financial system and information. In the spirit of challenge, Double Chain ventures into new technologies including IoT, e-Currency and IoT device security, IoT data integration and the use of big data.