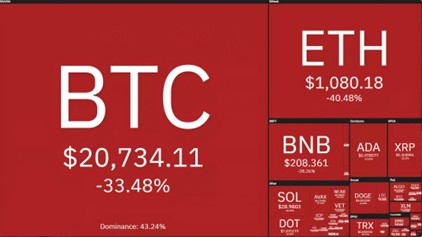 Probably everyone remembers the general excitement in cryptocurrencies due to the growth of Bitcoin and other cryptos in 2021. However, since the beginning of 2022, the optimistic picture has been replaced by a pessimistic one, and it seems as if all the media have forgotten about the existence of cryptocurrencies, and the market is undergoing the strongest decline in the last 10 years.

But what if you can actually bypass the market decline and earn up to 540% a year… just by storing tokens.

What to do in this situation?

During the collapse of the market, it is reasonable to diversify your assets, giving preference to the most stable and popular cryptocurrencies. The reason is simple: when BTC drops by 33.5%, an unknown ABC token may drop by 100%. Simply because in a stressful situation, the owners of the crypto are trying to get rid of risky assets.

But what if you used this advice (diversified assets between BTC, ETH and XRP), but you want not only to lose as little as possible, but also to earn? 4 years ago, mining could have been advised in such a situation, but in 2022 this advice will be more likely harmful. A healthy alternative to mining is staking as a way of passive earnings, in which users store coins on the Proof of Stake (PoS) consensus, ensuring the efficiency of the blockchain, and making a profit for it.

There is an opinion that the possibility of staking is available only to cryptocurrencies that work on PoS, for example, EOS, Tezos, TRON and Cosmos. Unfortunately, these coins cannot be called “risk-resistant”, which means that the first anti-crisis condition for the redistribution of assets into reliable coins is not fulfilled? In fact, there is one option…

Cross Staking: technology for staking PoW coins up to 540% per year

Back in 2015, developers from the Matrix Network cryptographic laboratory began working on Cross-chain Staking technology, which allows you to stake cryptocurrencies on PoW consensus.

To put it shortly, Cross Staking technology allows you to “hold” cryptocurrencies at a rate of 0.5% to 1.5% per day. It resembles a deposit in a bank, with 2 important differences:

High profitability is achieved due to a sidechain with a modified PoS protocol, in which staking is carried out. This sidechain does not actually create new blocks, which allows you to significantly increase the speed of staking, and hence its profitability.

How can I use Cross Staking?

You can take advantage of Cross Staking through two major providers: Oreol Staking or Prime Stake. Each of these providers offers not only PoW staking of cryptocurrencies but also highly profitable coin staking on PoS consensus. Over time, the number of providers will increase: for example, 3 more providers will be integrated by the end of the year.

Before Cross Staking, a user could buy a cryptocurrency and “forget” about it, hoping for a price to increase. For example, if he bought BTC in January 2021, he would have lost 33.5% of its value.

If this investor had engaged in Cross Staking, then in 5 months (beginning of January-end of May) he would have earned 150%. Even despite the fall in the BTC exchange rate, he would still have earned 116.5% of the invested amount.

Thus, Cross Staking is an excellent solution for “bypassing” a pessimistic market. Use Cross Staking, withdraw profits and reinvest interest, or simply engage in passive holding — now your income depends on you, and not on an unpredictable market.

Disclaimer: This is a paid publication. The statements, views and opinions expressed in this column are solely those of the content provider and do not necessarily represent those of NewsBTC. NewsBTC does not guarantee the accuracy or timeliness of information available in such content. Do your research and invest at your own risk.