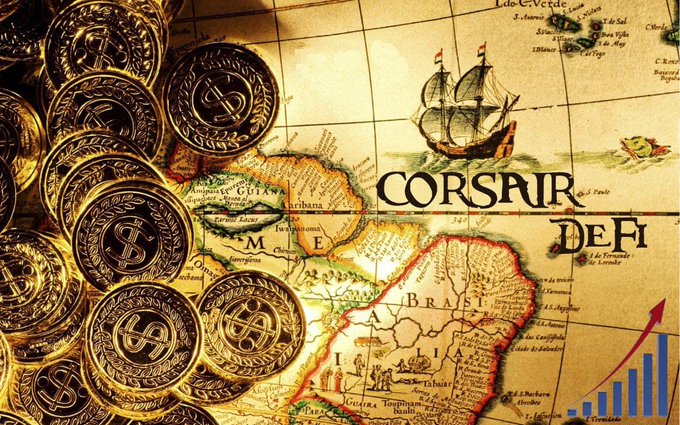 Corsair DeFi Becomes the Most Talked About Project of September

The CASH token is an instrument of influence on the global cryptocurrency market, created by a group of anonymous traders from the Euronext exchange – Corsair DeFi. With this token, anyone can resist market makers and constantly earn money on the growth of the token and on the services of seizing and farming of the CASH token.

2017 was a huge year for the entire crypto industry. It was then that Bitcoin became the most popular word of the year. The main cryptocurrency at that time rose from $800 to $20,000, and the rest of the altcoins followed this movement and turned their holders into rich.

Digital money has gained worldwide recognition. Naturally, the crypto phenomenon has attracted the attention of major players in the financial industry. At this very time, several traders leave the large European stock exchange Euronext and join the crypto game. A few months later, they called themselves Corsair, and their main mission was to fight the dirty trading methods of those we used to call whales.

According to the Corsair founders, they have extensive experience trading on the largest European stock exchange, Euronext. This exchange has been operating since 2000. From the first days of the European Union’s existence, the question arose of harmonizing inter-exchange relations and requirements for platforms, players and issuers. Its capitalization is estimated at over $6 trillion.

The Euronext exchange, from where Corsair came out, has a 20-year history and branches across all continents of the planet. Therefore, it will be difficult to say exactly where the core of Corsair is. It can be assumed that their main center was founded either in Paris or in Brussels, because there are Euronext exchanges that are engaged in futures trading. This is the main type of trading, the experience of which can be transferred to the crypto market.

From the very beginning, only trade was in their plans. But after months of observing very strange market moves, Corsair decided that someone was playing a foul game and was using their mass to lock in the profits of hundreds or even thousands of people in a single move. It was then that this team decided to challenge the whales. Corsair does not recognize anyone’s power or influence, be it a major exchange or one major holder. They throw anyone who manipulates prices in bad faith ashore.

It took them several years to hone their whale hunting skills and assemble a team that shares a common idea and mission. With each market fluctuation, more and more people join the team who want to make money together and return what they lost earlier. During this time, the Corsairs lured over 30 experienced traders from all over the world to their ship. More than 500 trading bots trained in whale detection and extermination are working under their banner.

Over the past couple of years, partners have appeared in different parts of the world, and more and more ordinary people are joining them. Because they are not satisfied with the constant loss of money. Corsairs track the movement of whales and lead them several steps ahead. They invite trusted investors to private groups where they warn of whale movements. The main goal of this community is to collect the profits dispersed by the whales before they do it. Look for entry to Corsair’s gated communities on their official info channels.

Corsair has now tokenized its mission. They launched the CASH token, which is becoming the main accumulation tool for the team to throw whales ashore. Token sale CASH is underway now. You can purchase pirates’ coins on their official marketplace.

Corsair will transfer most of the trading profits to the CASH liquidity pool. Thus, you can always earn by keeping funds in toĸen CASH. Corsair has the technology used by most cryptocurrency hedge funds. Technology constantly monitors the activity of the addresses of the largest investors. When large assets are moved, these technologies are activated and inform the community about the reasons and plans of the trader.

Token CASH has already gathered a large community in all corners of the cryptocurrency business around the world and, accordingly, will collect a fairly large capitalization. The corsairs are building their own republic – their DEX CORSAIR. This will force people to be considered dreams in the global cryptocurrency market – and for this, we need a large army of like-minded people. Become CryptoCorsair and strike a balance in your direction!

DeFi Farming is a profitability or liquidity platform where users can provide liquidity and place bets in exchange for Corsair CASH. Corsair Farming will begin in Q4 2021. The farm formula will be published shortly before the launch date. Due to the recent changes in today’s DeFi world, the team needs to be very flexible and innovative in terms of the farming formula developed in order to ensure the attractiveness and visibility of the CASH farm. Corsair Farming is the only platform where you can earn CASH. In addition, CASH Farming will include unique pools to help you earn CASH and other coins/tokens in the future. What happens when someone wants to work?

Let’s say Jack buys 1 CASH for 300 USDT using the BNB USDT pool. By doing this, it increases the USD stake in the pool and decreases the CASH stake in the pool. In fact, this means that the price of CASH is going up. Why? There is less CASH left in the pool after the transaction, and we know that the total liquidity “k” should remain constant.

This mechanism determines the price. Ultimately, the price paid for the CASH price depends on whether the transaction changes the relationship between “x” and “y”. It is worth noting that this model does not scale linearly, because the larger the order, the more the balance between “x” and “y” shifts. This means that larger orders become exponentially more expensive than smaller ones, resulting in more and more slippage. Consequently, the larger the liquidity pool, the easier it is to process large orders. Why? In this case, the shift between x and y is smaller.

How to make the most of the CASH token?

In late August, Corsair launched a private sale of CASH tokens. Now the closest participants are recruited into the project, for whom special conditions will open from the very beginning. You can be part of the crew and part of the Corsair ship at the lowest price during pre-sale – 5 cents ($0.05) per 1 CASH. Also, the first of the first will receive an additional opportunity – to earn on CASH token staking even before entering the first exchange. The minimum cost for a front-row ticket is $77. A maximum of one hand can dispense CASH of up to $7,777. The starting price on the first exchange starts at $0.1