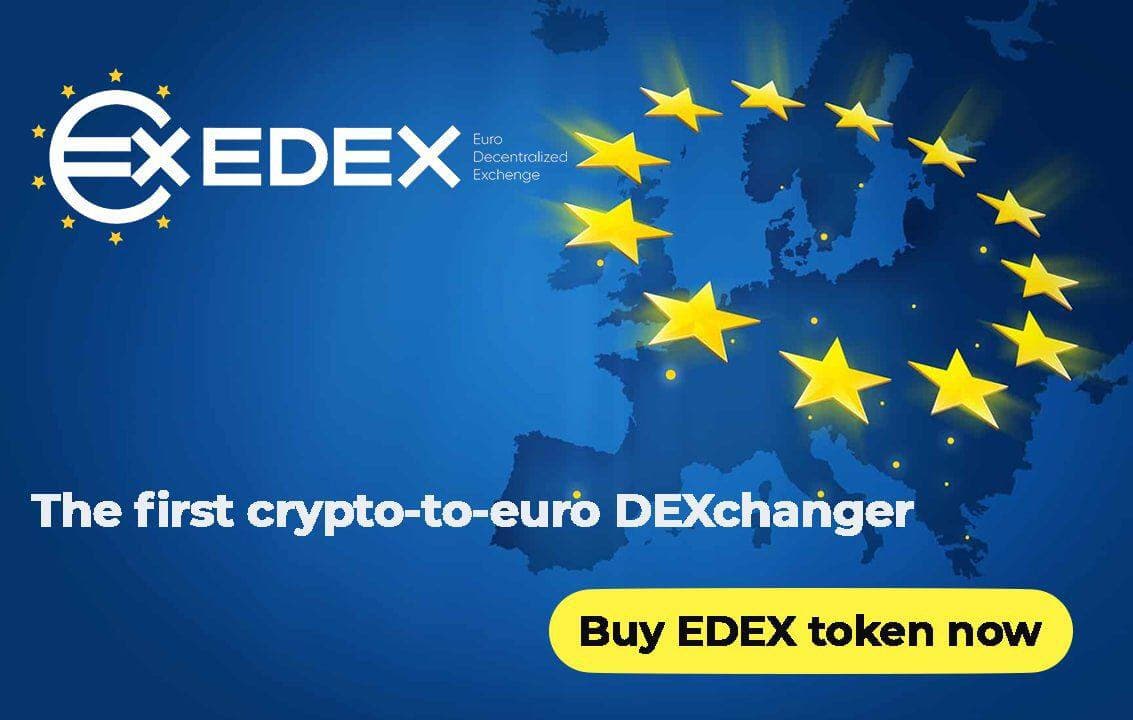 EuroSwap EDEX: Official Vector of Europe in Crypto and the World’s First DEX Pegged to the Euro

The European Union is expanding its interest in the field of cryptocurrencies and has proven this by deciding to invest 750 billion euros in digital technologies. This was stated by the President of the European Commission Ursula von der Leyen in her address to the European Parliament.

EuroSwap is the world’s first DEX pegged to the euro

Over the past year, the European Region has received over 1 trillion euros worth of cryptocurrency. This is 25% of all global activity, with 50% being from DeFi. The emergence of independent crypto projects that can support institutional initiatives, as well as create healthy competition for government financial products, is becoming natural. One of the first projects that supported the vector of Europe’s development was EuroSwap – European Decentral Crypto Exchange (EDEX).

For the first time in world history, EuroSwap will allow you to buy and sell cryptocurrency on the Decentralized Exchange for the official currency of the eurozone – euro €. EDEX achieves these goals through the most advanced blockchain technologies, as well as through partnerships with major payment systems like VISA, which will open gateways for fiat euro transactions. That is, now hundreds of millions of Eurozone residents will be able to safely buy cryptocurrency using a simple bank card and just as easily withdraw their profits to the card.

The European Decentral Crypto Exchange is currently pre-selling EDEX tokens on the EuroSwap exchange. Priority Session offers early investors personal benefits: the minimum sale price of the EDEX token; the opportunity to own a large commercial and intellectual share in the EuroSwap project; round-the-clock support on all issues related to the EuroSwap project; free period of asset management without LockTime; participation in the closed Priority community after the start of the second stage of PreSale.

“Bridge” between crypto and euro

Up to this point, fiat gateways have never been used on Decentralized Exchanges. But with the development of blockchain technologies in conjunction with banking services such as VISA, this becomes possible and EuroSwap is the first to use this opportunity. This will primarily affect the popularity of cryptocurrency in Europe, which can now be bought with a bank card without going through complex and lengthy identity verification.

And although Europe is showing tremendous results in crypto activity, these indicators still have room to grow. In 2021, the number of cryptocurrency holders in Europe was less than 5% of the total population. EuroSwap’s mission is to promote the initiatives of the European Parliament and increase the involvement of Europeans in crypto up to 25% by 2024. EDEX is a self-contained cryptocurrency and fiat euro trading technology that supports the European vector of digitizing the economy.

Is the EDEX token a digital euro?

According to the EuroSwap development team, the EDEX token is not an attempt to create a digital euro. At the official level, the European Central Bank is already engaged in digitizing the euro currency. In turn, the EDEX token provides its holders with the right to own shares of the intellectual and commercial property of the European Decentral Crypto Exchange project. This means that when you buy EDEX, you are buying a digital bond that guarantees your ownership and profit sharing for EuroSwap.

The EDEX token is backed by the capitalization of the project in the digital market, as well as the mechanisms for earning the Decentralized Exchange – EuroSwap will primarily earn 0.03% commissions from each transaction in cryptocurrency and 0.8% when trading cryptocurrency with fiat euro. Thus, the project becomes profitable, and its capitalization grows with the development of the product and the general vector of Europe towards crypto.

The tokenomics of the European Decenter Crypto Exchange is designed in such a way that every resident of the European Union has the opportunity to own at least one EDEX token – the total emission is 746,000,000 tokens. The Binance Smart Chain blockchain network allows you to transfer EDEX tokens from account to account in a matter of seconds and for a minimum commission of a few euro cents.

Official supporting bot of the project in Telegram. Follow the EuroSwap project updates on the official community channels in social networks Telegram and Twitter.