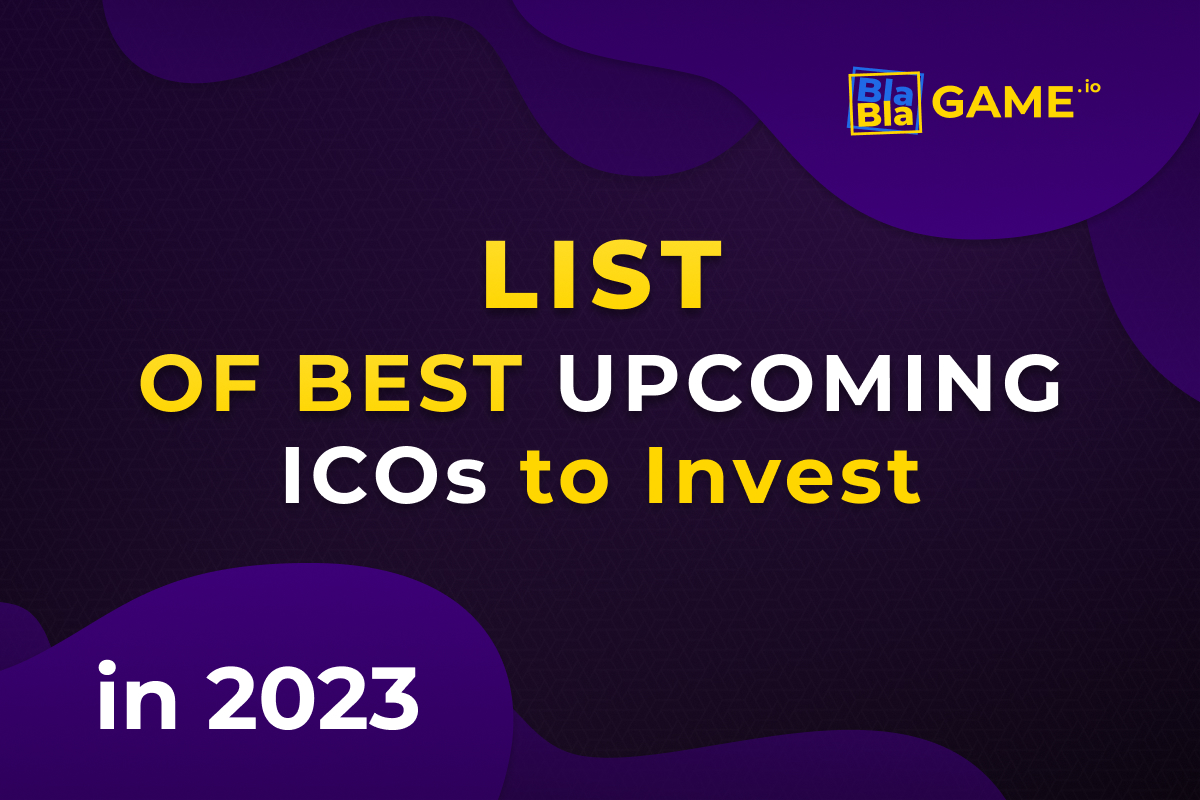 List of best crypto upcoming ICOs to invest in 2023

This article will discuss the best crypto ICO list to discover that will be available to investors in 2023. An initial coin offering (ICO) or initial currency offering is a type of funding using cryptocurrencies. Often startup companies use an ICO as a source of capital. Companies offer users to buy their tokens for stable cryptocurrencies. Since there is no external regulator represented by the state, we have to rely on reputation.

The initial coin offering has 2 goals. The main goal is to raise money to finance the project (the work of programmers, marketing and managers). Another task of the tokensale can be the promotion of a startup. Since such events attract the attention of the entire crypto community, people start to be interested in new ideas and developments. This is how a community is formed.

Here are the best crypto upcoming ICOs to invest in 2023:

What is an ICO token?

An ICO token is a digital asset that companies offer investors to purchase at a fixed price. There are special platforms for issuing tokens. Some of the most popular are Ethereum, Waves, NEM, EOS. Each has its own advantages: for example, Ethereum has the largest audience — 5 million users, Waves has a high rate of token issuance.

Why Should We Invest in ICO Tokens?

For example, one of the largest crypto projects on the market currently, IOTA started as an ICO in which each MIOTA was sold for $0.00059. The highest price a MIOTA ever had was $5.23, so the investment increased 8864 times.  The performance of the other cryptocurrency named Neo was even better. By starting with 33 cents per token, the highest price was about $157 for each coin which is 475 times its original price.

The most important rule you always need to remember is that you never should invest more than you can afford to lose. There are risks that your holdings will plummet in value as cryptocurrency markets are extremely volatile.

The best upcoming ICOs to invest in 2023

Sometimes finding the best crypto ICOs is not easy for the investors. Here we will discuss 6 upcoming projects in 2023 that you should pay your attention to.

The first Rock, Paper, Scissors cryptocurrency game of 2023 in the world tops our rating. The creators of this game use innovative blockchain technology. All the created games are protected with the SHA-256 algorithm. It guarantees that the object of the created game cannot be compromised by anyone. Users can play only with real users.

The team has their own token – BLA token. It is issued on Ethereum network. Currently, Tether USD (USDT) and BLA-token are available for playing Rock-Paper-Scissors game on BlaBlaGame.io.

BlaBlaGame has rating system, which consists of 10 levels each of which requires both the certain number of bought BLA-tokens and Rock-Paper-Scissors game wins. Users also can earn higher cashback rewards for win in each Rock-Paper-Scissors game, higher referral rewards from multilevel referral system for win in the games by user’s referrals, advanced token sale referral rewards.

BlaBlaGame is part of global GameFi industry which is currently hyping in the cryptocurrency market. You can buy tokens and earn bonus: https://blablagame.io/buy-bla-tokens

Another project is Web3Metaverse. Web3Metaverse is an innovative gaming and metaverse network with a new kind of payment ecosystem. The team stands firmly in support of financial freedom and the liberty that WMT provides globally for anyone participate to VR gaming in a permissionless and decentralised network. Which empowers people to not be marginalised by governments and financial institutions. If you are going to use a passage of WMT platform, you need to be sure there isn’t anything embarrassing hidden in the web3 metaverse blockchain.

A cryptocurrency associated with Web3 may provide various services formerly offered by cloud providers, such as computation, bandwidth, storage, identification and hosting services. With the rapid growth of cryptocurrencies and Web3, developers have been working on improving both technologies by making them more scalable, secure and efficient. Web3 is often mentioned with cryptocurrencies because they share the core principles of decentralization and equal access.

$HONEY is a tradable, deflationary, utility, Fancy Bears Metaverse native, Ethereum Mainnet ERC20 token. It will be used and distributed among the Fancy Bears community, but it will thrive inside the whole NFT world.

Another best ICO crypto which worth your attention is CNX-Network. The first sustainable worldwide blockchain technology network, offering encrypted, interconnected and same interface applications that are used in daily life, running on its own blockchain and currency. CNX builds platforms that are connected to the CNX Network. The team offers users in the beginning of the project a range of 7 quintessential apps and the possibility of the network to expand beyond to 100 applications.

CNX Network is committed to becoming one of the most widely used decentralized payment systems, providing user friendly applications and a global trading community.

Also you should pay your attention to Metaverse. Metaverse is a collective virtual shared space created by the convergence of virtually augmented physical reality and physically persistent virtual space, including the sum of all virtual worlds, augmented reality and the Internet.

MetaSystem Token also boasts of the largest communities in blockchain that will actively engage across multiple social channels.

The MSYS team will be working closely with Binance Smart-Chain to leverage all the opportunities BSC rapidly growing MSYS ecosystem has to offer. Most credibility introducing this pool of users to MSYS gives them new opportunities to utilize cryptocurrency and will convert them from blockchain enthusiasts to permanent members of the community.

ICO Investments have both notable advantages and disadvantages compared to already listed cryptocurrency. Thus, skillful investors, who buy a new cryptocurrency in an ICO as early as possible can hope for skyrocketing value increases. Based on the detailed review of projects, the TOP best ICO of 2023 is BlaBlaGame – Rock-Paper-Scissors crypto game with BLA token and advanced SHA-256 games protection.