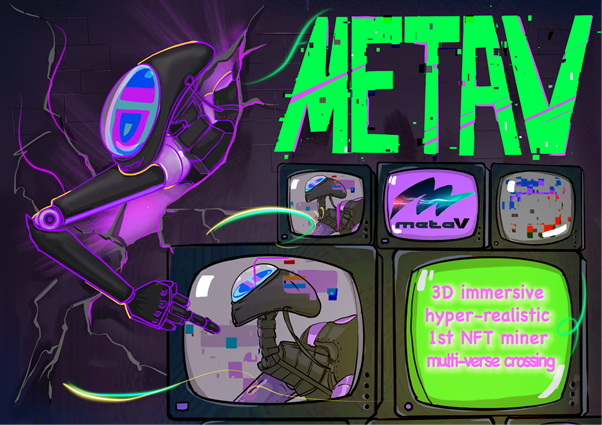 MetaV is the first hyper-realistic metaverse to launch in crypto space. The project comes with a number of never-before-seen features that will totally redefine mainstream metaverse and NFT projects. MetaV team believes that metaverses should be connected not only among metaverses but also with the real world, and therefore they endeavor to create an open world where users can have fun almost anywhere with any IPs or figures they like.

MetaV’s long-term offering is somewhat of a more vivid and open Sandbox, in which users can purchase, store, share, present and trade their NFTs, play with them via AR (augmented reality) in real world, enjoy social interaction and games or any other things one can do in a metaverse. However, the project differentiates itself by introducing very hyper-realistic NFT offerings and space, while breaking the wall that separates it from other metaverse projects and even reality. It allows participants to create their own metaverses from within the MetaV ecosystem.

MetaV takes its players out of 2021 and into the future. As humans re-emerge in 3021, they begin to build a new home in a post-apocalyptic world. After the humans lost the battle to the Millennium Bugs army in 3000, the Big Bang of MetaV (“TBBM”) wiped out the bugs and most of the human population. Now, the last humans must work towards rebuilding MetaV after the Ether Particle exploded.

Mtopia, the interstellar united institution for maintaining orders of the new world, organizes a Guardian troop to protect the survivors from similar threats. In its activities, Mtopia discovers that human prophets had hidden pieces of civilization in “Cryptals”– uncrackable crystal cubes that would be crucial to rebuilding the new land. The Cryptals are concealed in the most hidden spots across the universe, and once found could largely expedite the recovery of human civilizations.

MetaV Universe is an open and free metaverse. Residents can follow the main storyline to find Cryptals and help rebuild the homeland, or they can just enjoy doing anything or becoming anyone there. The extreme pursuit of openness and strong resources of MetaV will nourish a free and fun world for everyone to play in.

MetaV’s NFT debut will be the DS1 (Discoverer 1) robots, which are used to search for Cryptals in the metaverse. The Cryptals residents find in the MetaV metaverse are basically NFTs, including MetaV official offerings or NFTs offered by other projects via wall-crossing. These NFTs go towards rebuilding human civilization in the metaverse. Players can trade their Cryptals (NFTs) on the MetaV marketplace or other public marketplace on Ethereum.

To mine on MetaV, residents would need to purchase or win DS1s. DS1 has a permanent sharing mechanism, and therefore the owner is granted with a fixed possibility to gain free airdrops in ALL official MetaV NFT offerings with no exceptions. The rarity of these NFTs could range from Limited to Rare. Therefore, the functions of DS1 in the metaverse and the economy system become consistent. How amazing is that!

MetaV invites other metaverses and NFTs to integrate with its metaverse through wall-crossing collaboration, either 3D, 2D or voxel universes. Actually, MetaV is about to merge the world of comics with its metaverse through cooperation with a famous U.S. comic IP very soon, launching its first co-branded NFT product and potentially more. This project aims to change the way players view the world, while also offering a platform for them to game and socialize.

MetaV is also launching a series of hyper-realistic NFT collectibles in the near future. These collectibles include avatars, equipment, wearables and so on, all of which can be of different uses in the MetaV Universe.

MetaV’s team consists of experts in visual special effects, gaming and crypto space. They are big sci-fi fans and geeks. At the very beginning, they were just creating some pretty dope digital gadgets and a dreamland playground for themselves and close friends. Eventually, they decided to go for the bigger future and started working on MetaV.

With more than a decade experience in visual special effects and gaming, MetaV team has developed cutting-edge tech strengths. For example, it is equipped with world-class 3D scanning technology, a 180 camera matrix scanning system, integrated with other sensors, and therefore recreating vivid visual 3D objects. MetaV team also possesses VR (virtual reality) infrastructure ability with 360 degrees panoramic video and 720 degrees VR live interaction. More than that, MetaV team develops its own creation platform, combining 3D building tools and real-time rendering engines, compatible with mainstream software such as MAYA and UNREAL. With some simplification and standardization on these gadgets, MetaV may realize interoperability in the metaverse, so users can really be creators.

Last but not least, MetaV team has a cross-platform game engine. With web-progressive loading of hyper-scale scenes and real-time global illumination rendering capability, MetaV team has the essential fuels for advanced game development.

With over a decade of combined knowledge and experience, married with the newest Web 3.0 technologies, MetaV is building a one-of-a-kind hyper-realistic immersive metaverse.

MetaV’s DS1 robot NFT debut will be in early November. After that, it plans to launch digital wearables in a techy but trendy style. By the end of 2021, MetaV will mint its Avatars. In 2022, MetaV focuses on developing its own platform that enables users with more complete functions and interaction with NFTs in both metaverse and the real world. Eventually, a full metaverse will take shape, however the date of which is yet to be determined.

To learn more about the project, connect with the team: