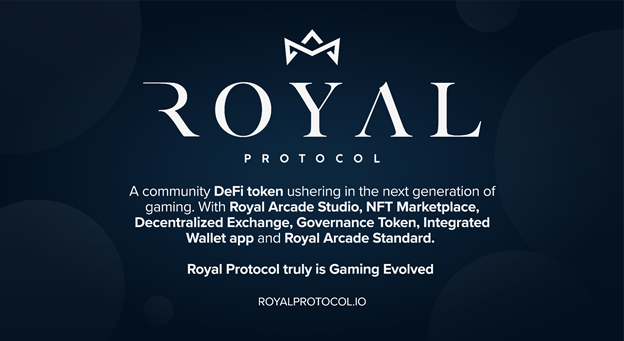 Online gaming, especially risked-based games, usually end in one of two ways. Either the player triumph over the odds and win, or they lose the game and their money in a roll of the metaphorical (or literal) dice. Large corporations in this arena deploy everything in their arsenal to part users from their hard-earned cash. Using dark patterns, undisclosed probabilities, and other questionable practices, these businesses ensure that gamers get stuck with the bill, time and time again.

That’s what Royal Protocol, a software development company from Texas, is here to change. By giving power back to gamers, they are bringing a revolution to the digital world.

Royal Protocol is the center of an ecosystem that powers projects like Royal Arcade Rewind (RAR), The Royal Arcade Certification, NFTySwap, CryptoDegenz, a proprietary, integrated crypto wallet, and more. By harnessing the power of multiple blockchains, they are a platform that facilitates the next generation of digital interactive entertainment. This is a space where players are finally able to approach games that are not only exciting but also safe. By recognizing the need for open accountability, Royal Protocol ushers in the era of GameFi- the confluence of gaming and DeFi.

“We aren’t just a game development company, or a crypto company, or a DeFi company,” says Rachel, Royal Protocol’s Director of Copy. “We are an organization that’s building anything and everything that could play a role in the future of online interactions. Royal Protocol is designing a single destination where everyone can enjoy games, own digital assets, build wealth, conduct secure transactions, participate in community events, and more, all from the safety of a convenient ecosystem.”

The organization’s focus on empowering gamers shines bright in their patent-pending technology, Royal Arcade Rewind (RAR). Imagine if losing didn’t mean either pay up or game over. The already-functional software of Rewind brings this concept to life, making even the most crushing defeat only temporary – while victories remain as rewarding as ever. This concept completely overhauls the fundamentals of risk-based games and works by simply freezing tokens for a period of time after a loss before releasing them back to the user. This means that gamers will have a third option: wait out the cooldown period, regain their lost tokens, and play again as many times as they want.

It’s not overstating to say that this innovation could change the industry forever. Royal Protocol’s breakthrough design means that every game on the RAR platform lets its players risk everything, and lose nothing, so even those with a history of gambling can comfortably play the games they enjoy without incurring a permanent loss. “We believe gaming has the potential to be so much more than just a pastime,” explains Rachel. “By removing the component of permanent risk, it transforms into a viable tool for financial empowerment.”

“And RAR is just our first product release,” she adds, excitedly. “Royal Protocol is also in the process of securing numerous other patents which will impact far more than just the world of digital gaming.”

Royal Protocol’s people-centric approach is also evident in their governance token (GROY). They are upgrading old voting mechanisms so GROY holders can have a fair and meaningful say in the company’s direction, and getting GROY has never been easier. In fact, they are currently giving away over $1,000,000 worth of GROY via their liquidity pool game, where anyone can stake ROY with BNB and earn their share of GROY in return. Participants can track their progress on the leaderboard and win extra rewards, like swag bags which include physical ROY collector tokens.

In the end, the Royal Protocol makes one thing very clear: just because something has always been done one way doesn’t mean that’s the best way. Change can only be brought by those bold enough to break away from the status quo and innovation can only come from those with real imagination. That’s why organizations like Royal Protocol, which use blockchain technology as a [RS1] key to unlocking limitless potential, are so noteworthy. By working tirelessly to introduce safer, more secure alternatives to popular platforms, Royal Protocol is a revolution. The reinvention of online gaming is just the first step.