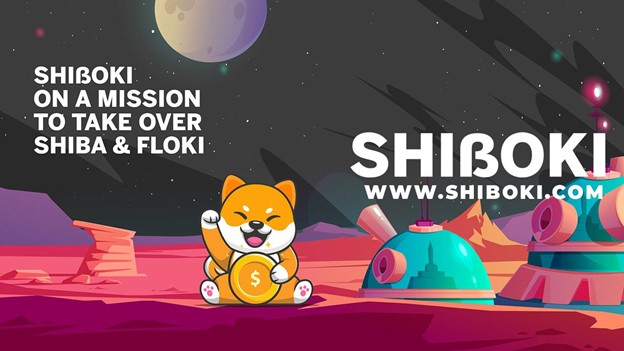 Shiboki: The Meme Currency You Should Not Pass-On Before it’s Too Late

The 2021 bull run has proven to be auspicious for several crypto holders holding tokens across all types, be it NFT tokens, primary crypto tokens or even meme currencies such as Dogecoin and Shiba Inu. However, on most of these occasions, a majority of the new entrants only come to know about the currency when it has already surged to its potential high,  thus missing out on the golden opportunity. Until a year ago, the meme currency was treated just as a meme and largely viewed as useless. However, these currencies are proving to be the biggest gainers in 2021 with two major meme currencies making it to the top of the top-10 list.

Shiba Inu is a perfect example of how meme currencies backed by a strong fan community have made several millionaires on their way to all-time highs. Looking at how meme currencies have ruled the bull run and something like Shiba Inu which was launched last year but made it to public domain this year has managed to surge a million percent. Keeping in mind how many traders and new entrants have missed a chance, Shiboki is aiming to fulfill that gap with its coming-of-age meme token. The community-driven meme currencies have come a long way from their early days of being valueless and Shiboki aims to take the momentum to the next level.

The coming of age meme token has already created social media buzz and was among the trending tokens on Coinmarketcap even when Shiba Inu was surging to new highs. Meme tokens gain most of their momentum from its community especially on social media and Shiboki aims to capitalize on that by offering great returns for the token holders.

SHIBOKI On a Mission to Overtake Shiba and Floki

Shiba Inu and Floki had their moments where they have made headlines, but today they are out of reach for the majority of the traders as the chances of another similar bull rally for existing meme tokens seems far-fetched. This is where Shiboki, the apparent child of both the leading meme currency in terms of price gains could take over

The taxes revolve around multiple different mechanisms such as BUSD rewards to holders, marketing reflection, liquidity fee, and burn. In the first hour, the Selling tax was set to 25% to ensure a sustainable floor price whereas Buying tax was set to 15%, which was distributed to holders & marketing. Later Selling tax was reduced to 20% to motivate hodling and Buying tax was set to15%, following which the Selling & buying tax was set equally to 15% of which was distributed in BUSD to holders, marketing, and liquidity to ensure an equal opportunity and continuous rewards mechanism. The token is scheduled for a Pancake Swap launch on 2nd November right after its presale and the liquidity has been locked for four months. The token is listed on Coinmarketcap as well as Coingecko with a full audit, making it a reliable investment.

Shiboki’s craze can also be determined from the fact that it started out with a  $650k market cap and reached a new high of $12Million making a  20x surge from the initial investment of presalers. This is quite glaring of how the token can perform once it gets into the limelight as $SHIB did and so did Floki.

It took years for Dogecoin and months for Shiba Inu to build a commendable social media presence that helped them become a trending topic that transpired into new investors and higher prices. On the other hand, Shiboki which has just successfully concluded its pre-sale is already making social media waves, ranking among the top 10 trending topics as well as garnering support from some of the formidable celebrities on Twitter.

Shiboki is the meme coin of tomorrow that is already churning out returns for its holders on par with other mainstream meme coins. The token also has several in-token taxation and conditions rewarding systems that would ensure healthy returns to holders on a timely basis. Shiboki fills the technical gap left by meme coins whose focus was primarily on getting social media traction than building a network for tomorrow.