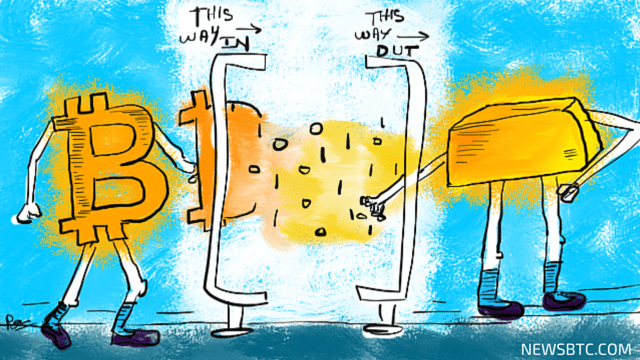 The virtual currency Bitcoin is currently celebrating a suspicious comeback. On Wednesday, November 4, it surged 25% and has reached the $500 mark for the first time since summer 2014. Just two months ago, the currency has been valued at about $200.

During the last three days, the currency has appreciated by 40%. In October, it has gone up almost 70%. Such a fast price increase is most likely not sustainable and indicates a bubble. Investors should watch out.

There are a variety of factors affecting Bitcoin prices. Experts say, that the Bitcoin will benefit from technological developments in the next ten years. Nowadays, for example, more banks use blockchain technology, which is also used for Bitcoin trading. However, that is a long-term trend and certainly not enough to explain price increases of more than 100% in just two months.

Right now, the economic crisis in China seems to be the most significant driver. After the Chinese economy got hit in August and the government devalued the currency, Investors are leaving the market in an attempt to secure their assets.

Considering that Chinese investors hold more than $22 trillion in savings accounts, this trend has a huge firepower. So far, capital flight from China has almost reached $700 billion in 2015.

Currently, about 90% of the global Bitcoin trade is taking place in China, because the virtual currency is a comfortable way for investors to get their money out of the country. In October, European courts decided that exchanging Bitcoins for Euros or other European currencies will be tax-free. Therefore, it has become attractive for investors to buy Bitcoins instead of directly converting their Yuans into Euros.

Moreover, China’s government is trying to limit capital flight by restricting transactions of more than $50,000. Bitcoins, however, are traded anonymously. Therefore investors can use them to avoid trouble with regulatory authorities.

Bitcoins are not backed by any central bank; enormous fluctuations are common and pose risks for investors

On the contrary to other currencies, Bitcoins are not backed by any central bank. Supply and demand determine prices, which can lead to significant fluctuations. In 2013, for example, demand exploded and prices went up from about $20 in January to $1200 in December. When Mt. Gox, one of the world’s leading Bitcoin exchanges, filed for bankruptcy in early 2014, prices collapsed.

Lack of regulatory controls have made Bitcoin less predictable than other currencies. Investors should take the current upsurge with a grain of salt. What goes up quickly could come down quickly, too. The current Bitcoin trend might not hold for long, investors should try to secure their funds in physical investment vehicles where they can.

A good strategy to secure funds is to convert some of this digital value into physical value. Investors who are looking for a safe haven, which doesn’t make them a subject to monetary policy, should take a look at physical investment vehicles.

Gold is especially attractive right now, because prices are low. Investors expect a Fed interest rate hike soon, which has pushed the precious metal below its recent support levels. Additionally, there is lower demand from jewelers and retailers, which has further driven gold prices down during the last months.

Moreover, another big advantage of the metal is that it’s fairly easy to convert Bitcoins into physical gold. Online platforms like BitGold offer investors the opportunity to buy gold directly with Bitcoin. The company even offers its clients to store their gold for free at over ten physical brinks locations internationally.

Although the latest rise of the Bitcoin is not yet comparable with the bubble in 2013, it is not realistic to assume that this trend will continue for long. Investors should be vigilant and secure their funds. As equities and bonds are not very safe neither, gold would be a fairly good way to get at least some of your funds out of the danger zone.