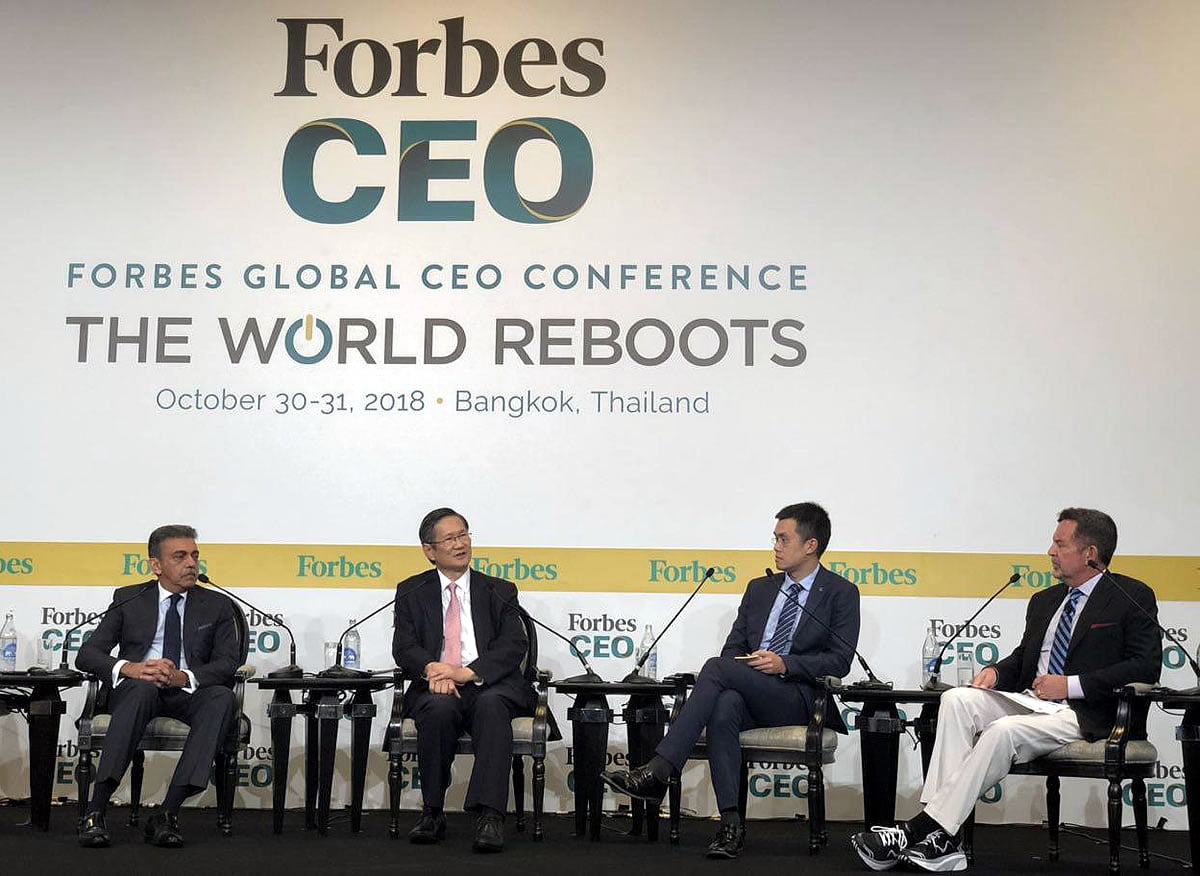 The Forbes Global CEO Conference has just started in Bangkok, Thailand, and participants have already entered various discussions. As always, the aim is to solve, but also present, various problems, and share their views of where the world of technology, business, and entrepreneurship is going next. One of the 400 attendants was Changpeng Zhao, the CEO of cryptocurrency exchange called Binance.

Forbes Global CEO Conference is an annual event that invites numerous attendants from all corners of the world. Currently present are entrepreneurs, CEOs, tycoons, investors, up-and-comers, and many others. The goal of the event is to discuss some of the largest issues that might affect the entire world, as well as to share ideas, and maybe even start off new partnerships.

In our second panel, Zhao Changpeng, CEO of @binance explains how blockchain companies are changing the nature of business. “We have no office, we have no bank account, and we have users from 180 different countries,” he says. #ForbesGlobalCEO pic.twitter.com/MkqJBE1QHj

Considering that participants and attendants of this event are considered some of the brightest forward-thinking business leaders in the world, many are interested in what they have to say.

As expected, cryptocurrencies and blockchain technology were mentioned quite frequently in discussions so far. This is the hottest technology right now, and 2018 has been very exciting for this industry. Investors were kept at the edge of their seat due to constant bear market, with only a hint of recovery every now and again.

Arguably the biggest representative of this technology during 2018’s Forbes Global CEO Conference is Binance’s own Zhao Changpeng. He started off by saying that Binance, which is among the largest crypto exchanges in the world, only started off in July 2017. That is barely 16 months ago, and already, it is known and used by traders from all around the world.

“#Binance was founded in July 2017, 16 months ago, and already has a multi billion dollar valutation for the company. That’s how fast things can move in crypto!" The intro for @cz_binance who will be speaking today @Forbes CEO Conference #ForbesGlobalCEO pic.twitter.com/67uYyhh9xM

This was how the boss of Binance explained the speed of events in the crypto world. Furthermore, to show how the nature of business has changed due to crypto and blockchain technologies, he said that Binance has no office, nor does it have a bank account. Even so, it serves thousands of users from 180 different countries on a daily basis.

He also attempted to explain that, while crypto and blockchain are still new technologies, they are not difficult to understand. He compared this technology to cars, stating that a person doesn’t have to know how the engine works in order to use a vehicle. In a way, while this is quite complex technology, the difficult part is happening underneath the surface. As for users alone, they do not have to be especially tech-savvy to use this technology.

While cryptocurrencies have grown quite popular during the last year, there are still a lot of people that stand against them. One of them is Bearing Private Equity Asia’s chief executive, Jean Eric Salata. According to Salata, Bitcoin is nothing but a Ponzi scheme and a fraud. Simply put, Salata doesn’t believe that cryptos, Bitcoin especially, have no uses for anyone who is not a criminal.

A stance like that proves that cryptocurrencies still have a long way to go before they enter the mainstream. While many are very supportive of this technology, there are also a lot of people who are not prepared to trust them.