Crypto Week In Review: The Market Remains Tumultuous Even Amid Bullish News 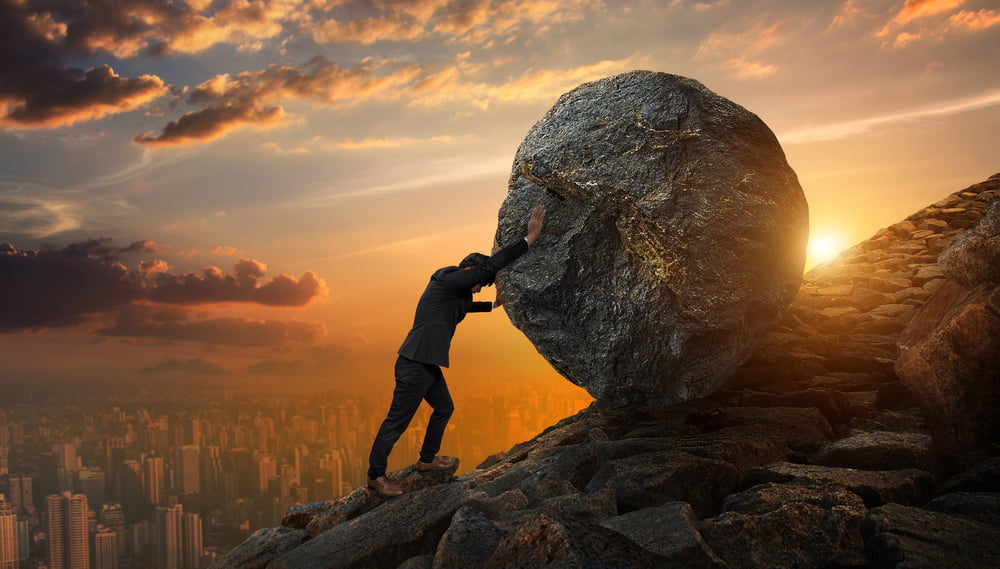 While investors entered this past week expecting for the crypto market to fall further, it has become apparent that the market has temporarily staved off a move lower. Whether this recovery was a result of positive fundamentals or just a “dead cat bounce” remains to be seen. Nonetheless, this week has had its fair share of positive news that will only better this nascent industry’s fundamentals.

Since the start of 2018, the cryptocurrency market has undergone a strong pullback. Contrary to what one may think, the Bitcoin network’s hashrate has continued to see a monumental rise even amidst a bearish market. In fact, Bitcoin’s hashrate has nearly quadrupled in the past eight months, even as Bitcoin fell by upwards of 65% and investors exited the market en-masse.

Not only was Bitcoin affected by a runaway influx of hashing power, but the amount of computational power allocated to altcoin networks have taken a hike across the board. Consider the Ethereum and Litecoin networks, which saw their hashrates double and triple respectively.  Taking these statistics into account, one would assume that mining would still be profitable for all parties involved. But according to a recent Bloomberg article, this situation may not be cut and dried.

According to Marco Streng, the CEO of Genesis Mining, larger corporate miners have begun to edge out consumer miners, as the fees incurred by in-home operations have continued to rise due to a runaway difficulty factor. Streng elaborated, stating:

Additionally, Blockbid COO David Sapper claims that some miners are willing to accumulate at current prices, and as satisfied with operating at a near-loss or loss. More specifically, he stated that “people are here for the long-term” and hold faith in the future prospects for this industry.

But as incessantly pointed out by Fundstrat’s Tom Lee, an increasing hashrate should theoretically drive up prices over time, as the break-even cost of mining has been seen as an unofficial level of support for cryptocurrencies.

Bitcoin Tracker One ETN Becomes Available For US Investors

As reported by NewsBTC, a Swedish Bitcoin exchange-traded note (ETN) has recently hit headlines across the industry. Prior to a recent announcement, the so-called “Bitcoin Tracker One” ETN, which was established in 2015, was not allowed to be purchased by US consumers and institutions.  But Coinshares, the firm behind the product, recently made a move to offer the product in the US and succeeded.

Although ETNs and the similar named ETF and not inherently identical, industry leaders, like Tom Lee, portrayed the two investment vehicles in a similar manner.

@CoinSharesCo buys #BTC with each share issuance, which means this ETN functions similarly to an ETF despite differences in structure. See excerpt from their Factsheet… Hence, as shares rise/AUM grows, $CXBTF is buying Bitcoin. pic.twitter.com/pjv7COUDoh

As a result, many speculated that investors would find solace in the fact that ETNs and ETFs produce similar results, therefore potentially pushing up prices as an official, publicly-traded Bitcoin ETF would. However, as the asset hit US markets, crypto prices stayed relatively flat to the dismay of many. As Bart Smith, Susquehanna’s head of digital assets, claims, this market remains in “show-me” mode, where investors need unrefutable evidence that a piece of news is either bullish or bearish before acting accordingly.

And as it stands today, maybe some aren’t satisfied with the initial volumes and statistics produced by U.S. traders utilizing Bitcoin Tracker One.

Pantera Capital has been held as an integral member of the tight-knit crypto family for the better portion of five years. As such, it is logical to see why the Menlo Park-based investment group has recently announced its aspirations to launch a third crypto-centric venture fund.

According to TechCrunch, Pantera is shooting for the stars, with a goal of $175 million in funding for its next venture. While it goes without saying that this figure is ambitious, the firm has already raised $71 million from 90 investors in a short span of time. Paul Veradittakit, a partner at Pantera, spoke with TechCrunch to address the funding target, stating:

“[The target amount is a] function of how fast the space is moving, the talent coming in, the opportunities, and the sizing of rounds. With more interesting later-stage investments [on our radar], too, we want to be flexible and able to move with the market.”

In this statement, Veradittakit alludes to the growth this market could see in the future, with many expecting this industry to continue to gain steam as time elapses.

Coinbase has planned support for Ethereum Classic (ETC) for months now, with the firm originally announcing a plan to integrate the asset in early-June. Since then, the US-based platform’s team has done its best to put the asset through the works, testing ETC for any flaws that could put it at odds with Coinbase products.

After two months of testing, Coinbase integrated the asset into its “Pro” platform. But at the time, users of Coinbase Consumer (Coinbase.com), along with other products/services, were unable to access this new addition.

Next came Coinbase Consumer, better known as Coinbase.com to people like you or me, with the retail-focused platform adding the crypto asset on Thursday at 5:00 PM (PST).

In direct correlation with these additions, ETC quickly saw an influx of buying pressure, driving up prices by upwards of 15% in the span of two hours. Therein lies another example of the so-called “Coinbase effect,” where an asset listed or even mentioned by the platform see a large uptick in popularity and positive consumer reception.

On Friday, it was revealed that Binance has joined hands with The Liechtenstein Cryptoassets Exchange (LCX) to launch a fiat-to-crypto exchange that will be based in the small European country.

Binance will take a key role in providing and maintaining the infrastructure of the exchange, while the other end of the partnership will take the reins for customer support, legal compliance/due diligence, KYC/AML, and communication with local regulators/regulatory bodies. As per a press release conveyed by LCX, the partnership, fittingly named Binance LCX, will be hiring 10-15 individuals to support a Liechtenstein office.

This exchange will first offer support for Swiss Francs (CHF) and Euros (EUR), along with support for “major cryptocurrency pairs.” While the number of cryptos supported may be mediocre on the platform’s release, it was noted that Binance LCX will add more trading pairs subject to regulatory approval. All parties involved expressed their excitement for this venture, including Binance CEO Changpeng Zhao, LCX CEO Monty Metzger, and Liechtenstein’s prime minister himself.

As addressed in the aforementioned press release, the small European country, sandwiched between Austria and Switzerland, is an optimal location to launch such an exchange. Liechtenstein has quickly proven itself to be a crypto haven, with the local government being relatively accepting of this often-feared and misunderstood technology.

While this market started and ended the week at a near-equal market capitalization, the price action seen throughout the past week was still as hectic as ever. Bitcoin started the week at $6,300, with the price of the asset seemingly finding a place to stand. But as the week moved on, Bitcoin, along with altcoins, tumbled. Although Bitcoin fell to $6,000, it failed to break through the heavily contested support level at $5,800. On the other hand, a majority of the foremost altcoins established new all-time lows.

As altcoins fell, many thought that the worst was yet to come for the market. But as clearly seen by the chart below, the further capitulation of crypto assets was staved off, or temporarily at least. The latter half of this past week saw many cryptocurrencies see a strong recovery, with total market capitalization recently peaking at $220 billion, or 15% off its weekly lows. 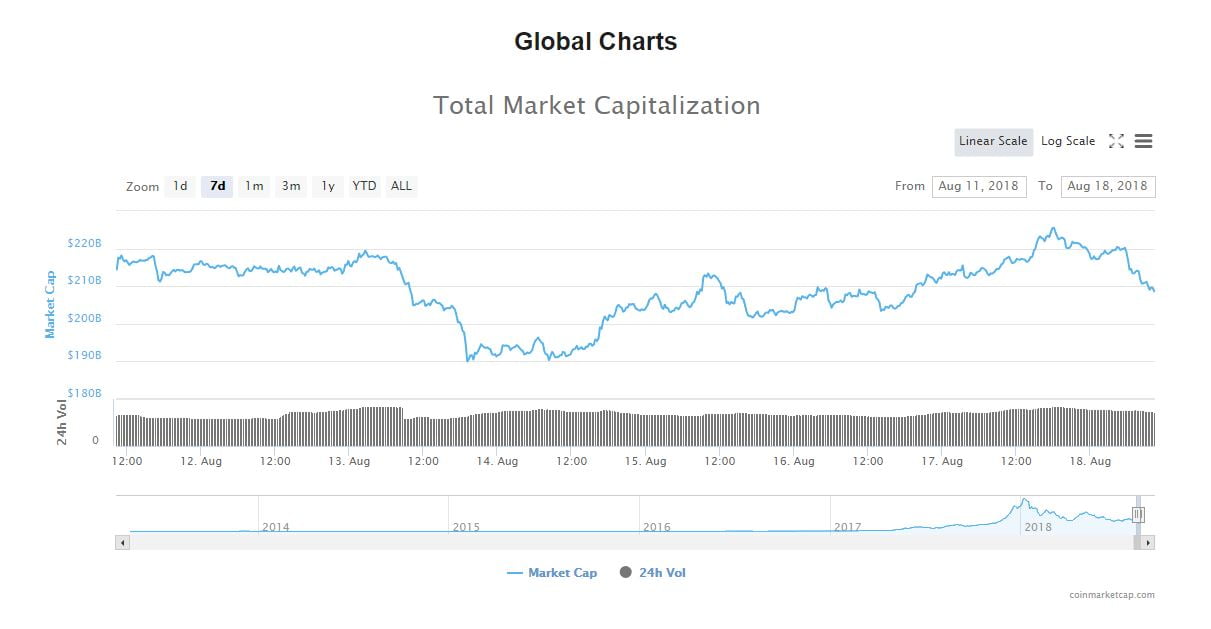 Surprisingly enough, Bitcoin dominance finally saw a pullback this week to 52.0%, following a near-relentless run-up to 54.5% of the entire value of the crypto market on Tuesday. Although many assets have recovered in value, some altcoins, including Ethereum, have still produced lackluster results. Ethereum’s 9% weekly loss has been widely attributed to an “ICO sell-off,” where projects have been selling the Ether they have crowdfunded in boatloads, driving down the price of ETH on spot market exchanges.

As fittingly put by CNBC Fast Money panelists, Bitcoin, along with the rest of the crypto market, remains in “purgatory,” with traders doing their best to determine if prices will head higher or lower in the near future.

Tags: BinancebitcoinBitcoin ETFBitcoin ETNbitcoin miningcryptocryptocurrencycryptocurrency exchangeETCethereumEthereum Classic
TweetShare
BitStarz Player Lands $2,459,124 Record Win! Could you be next big winner? Win up to $1,000,000 in One Spin at CryptoSlots