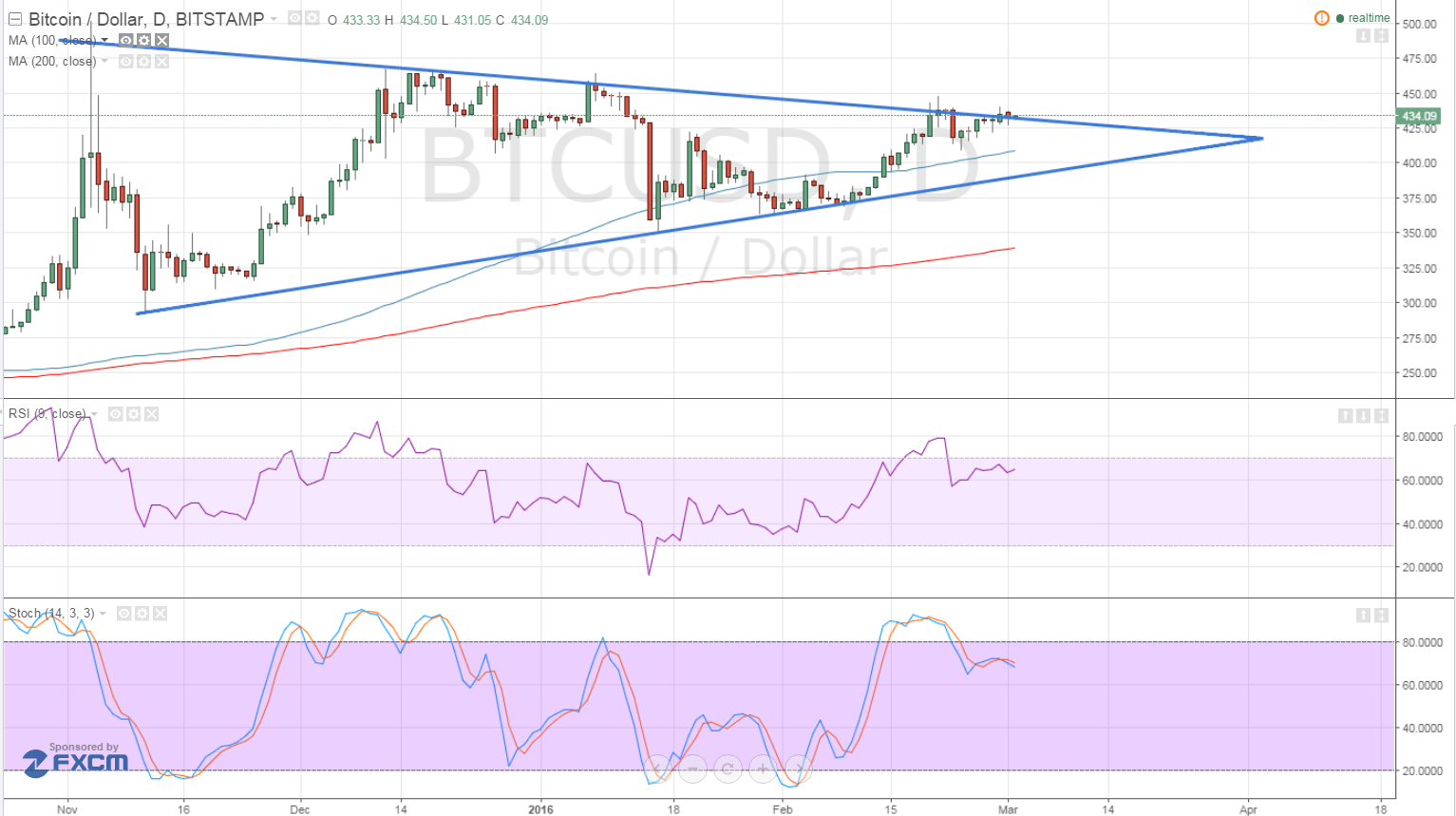 Bitcoin price is trying to make an upside breakout from the symmetrical triangle but another test of support might take place.

On the daily time frame, the 100 SMA is safely above the 200 SMA, which suggests that the path of least resistance is to the upside. In addition, the moving averages are edging farther apart so bullish momentum is getting stronger.

An upside break from the resistance could lead to a move to the triangle highs at $500 and beyond. The chart pattern is around $200 tall so the resulting rally could last by the same amount.

However, stochastic and RSI are on their way down from the overbought levels, which indicates a return in selling momentum. Both oscillators have a long way to go before reaching the oversold area so sellers could stay in control for a while, possibly taking bitcoin price to the triangle support around $380. Near-term support is also located at the 100 SMA dynamic inflection point around $400.

Risk appetite has been in play so far this week, even as data has been mixed. This has supported higher-yielding assets and cryptocurrencies against the US dollar, although economic reports from the US recently beat expectations.

However, expectations of an oil production cap are currently supporting commodity prices and higher-yielding currencies. Also, the Chinese central bank’s decision to lower their RRR spurred talks of additional stimulus, which could lead to a boost in global growth expectations. Upbeat reports from Canada, New Zealand, and Australia are also keeping the risk-on flows going, which is also bullish for bitcoin price.

For today, the US ADP non-farm employment change report is due and this could provide some clues on how the NFP report might turn out on Friday. With that, additional volatility is expected for dollar pairs, possibly enough to trigger a strong bounce or break from the symmetrical triangle resistance.

Analysts are expecting to see a 185K gain in hiring, slower than the previous 205K increase, but a larger than expected climb could mean more dollar gains. On the other hand, a downside surprise could be enough to boost bitcoin price past the $435 area and onto $445 and beyond.

Other catalysts today include the release of US crude oil inventories data, as a decline in stockpiles could mean more gains for prices and risk-taking. Analysts are expecting to see an increase of 2.5 million barrels, slower than the previous gain of 3.5 million barrels.