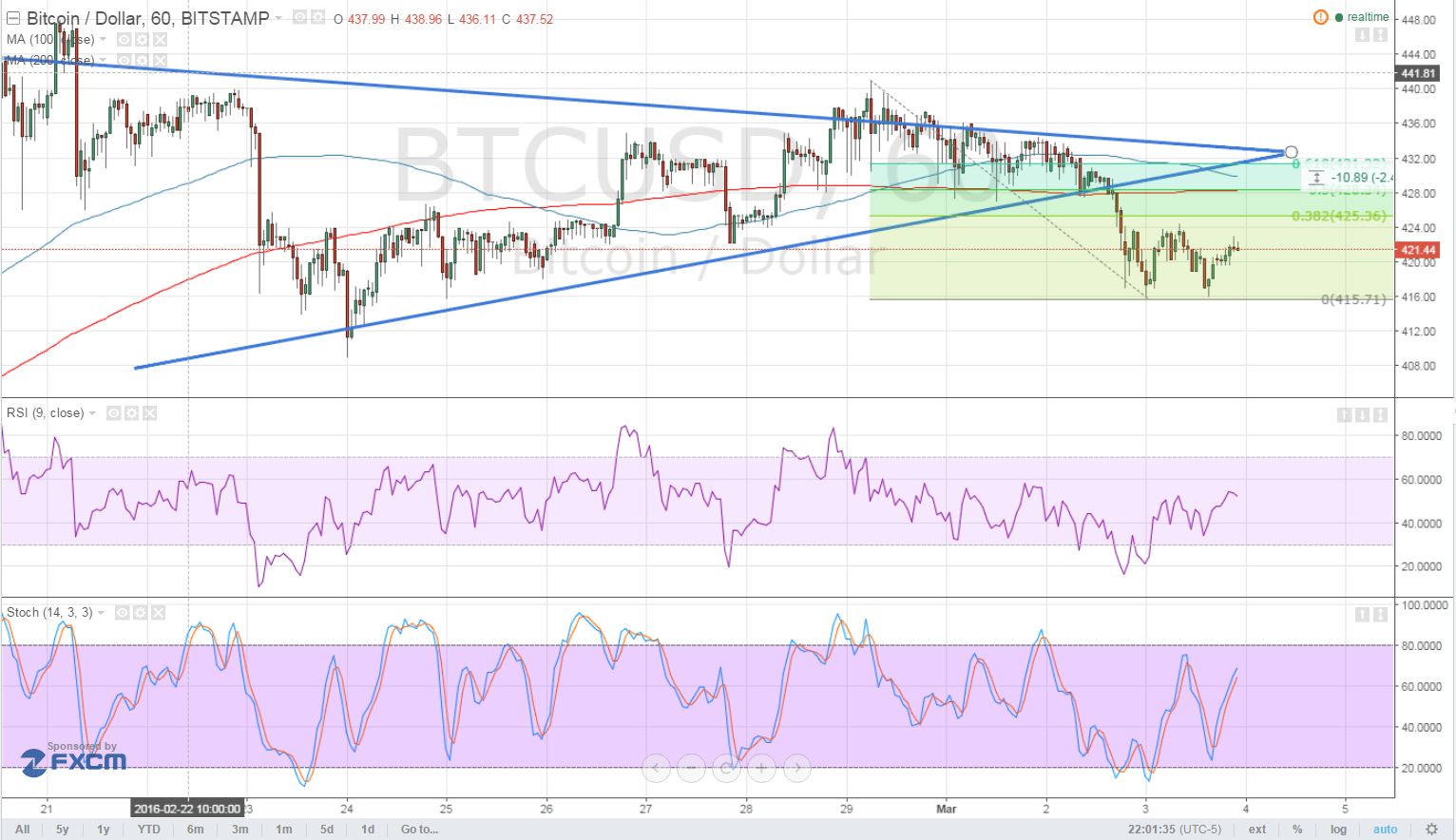 Bitcoin price might be in for a quick pullback to the broken triangle support before carrying on with its drop.

Bitcoin price has formed a small double bottom pattern, indicating that a quick rally could take place. This could stall around the broken triangle support near the $430 level and the 61.8% Fibonacci retracement level.

A shallow pullback could last until the 50% level or the $428 mark, which is also near the dynamic resistance at the moving averages. For now, the 100 SMA is above the 200 SMA but a downward crossover could confirm that the selloff is about to resume.

An even smaller pullback could encounter a ceiling right around the 38.2% Fib or the $425 level. Both stochastic and RSI are on their way up, indicating that bullish momentum is in play at the moment. Once these oscillators hit the overbought regions and turn lower, sellers could take control of the game.

A combination of weak US data and waning risk appetite kept bitcoin price moving sideways yesterday. In addition, traders probably hesitated to pile on their dollar positions ahead of today’s non-farm payrolls release, which might have a huge impact on Fed rate hike expectations.

Analysts are expecting to see a 195K increase in employment, a faster pace of growth compared to January’s 151K gain. Still, the unemployment rate could hold steady at 4.9% while average hourly earnings could see a measly 0.2% uptick, which might keep a lid on dollar gains.

Of course stronger than expected results could spur strong dollar gains, leading bitcoin price to break below its previous lows at $415. The next support area is at the $400 level, followed by $380 then $300.

On the other hand, much weaker than expected figures could spur a strong climb for bitcoin price as traders let go of their long dollar positions. This could lead to a break past the triangle resistance at $440 and onto the next ceiling around $465.

On its daily time frame, it can be seen that bitcoin price is still stuck inside a larger symmetrical triangle pattern, although it has been making a pretty good attempt at breaking past the top of the formation. A long green candle closing above the triangle resistance could pave the way for a prolonged climb, possibly taking bitcoin price to its previous year highs of $500.

On the other hand, lack of bullish momentum could keep it on track towards testing the bottom of the triangle formation sooner or later. Both oscillators are indicating the presence of selling pressure on the daily time frame but the 100 SMA is safely above the 200 SMA for now.