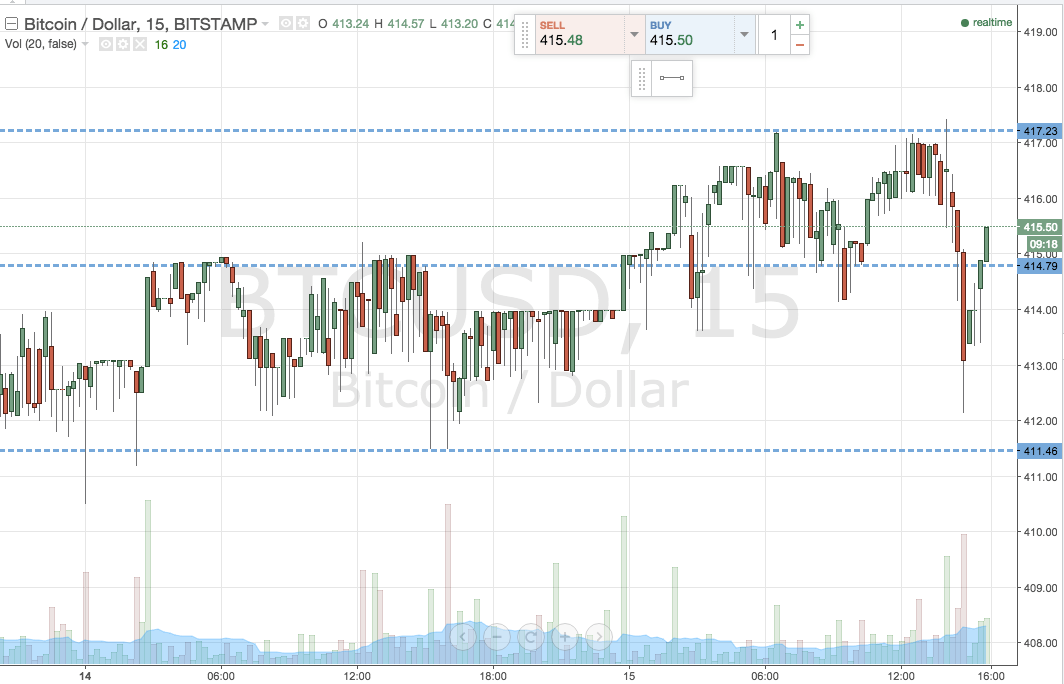 In this morning’s bitcoin price watch piece, our focus was on two things. The first, an ongoing trade that we entered during the Asian session – one that had tested our stop but not hit it, and at the time of writing, was testing broken resistance as support. We took this testing as a positive sign, in the sense that the longer the level held, the firmer the support should be, and in turn, the higher the likelihood of a target hit.

As we did this morning, we’ll kick off tonight’s analysis with a chart to show how things played out.

As the chart shows, action post-this morning’s analysis didn’t work out particularly well for us. We once again got a break of support to the downside (having switched from resistance on the entry) and this time it was enough to take out our stop on the trade for a small loss.

For those who weren’t in a trade, however, and as a concurrent strategy, we outlined an entry that saw a short position taken on the break of 414.79, towards a downside target of 411.50. This entry activated earlier this afternoon, and while we saw a sustained run initially, it failed to reach our target. Technically, this trade is still on, as we are yet to take out the stop. Things aren’t looking great, however, so let’s move on. The chart below shows tonight’s range and levels to watch.

As the chart shows, we’re narrowing our timeframe a little, and focusing on a range defined by in term support at 414.17 and in term resistance at 417 flat.

A long trade will signal when price closes above resistance, at which point we will look to enter long towards an initial upside target of 420 flat. A stop at 416.5 will limit our risk.

Conversely, a short trade will signal on a close below support, and we’ll enter towards 411 flat with a stop loss at 415.5 to help us maintain a positive risk profile on the trade.