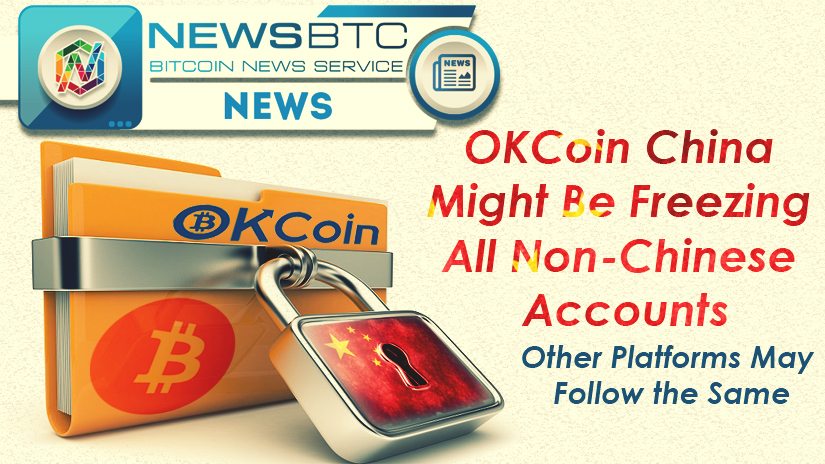 The Chinese cryptocurrency market is showing signs of a major overhaul. The digital currency platforms in the country have made some drastic changes to their offerings in the recent days following PBOC’s inspection.

It all started a few weeks ago after Bitcoin’s price experienced a sudden fall. The situation caused traders to panic and start logging into their accounts on cryptocurrency platforms trying to execute stop-loss trades. Unable to handle the sudden rush, the platforms malfunctioned, preventing a significant number of traders from accessing their accounts. It resulted in few users reporting losses.

A recent report by one of the social media users on Reddit indicates OKCoin’s crackdown on foreign accounts. The China-specific version of the platform has allegedly frozen accounts belonging to people who aren’t residing in Mainland Chinese territories. The user going by the name “fiat4lyfe” had to verify his personal details including passport information and residence info to get the funds released.

Fiat4lyfe also reported that the OKCoin representatives agreed to unfreeze the account to enable him to make the withdrawal, following which the account was permanently closed/frozen. This new development on OKCoin caught many by surprise, and some believe that the similar policies will soon be adopted by other mainland Bitcoin exchanges as well.

The blockade on international Bitcoin trades on domestic platforms may just be the beginning. While it only impacts those outside China, the country’s government is also implementing restrictions on VPN services within the country. With unauthorized VPN services gone, the Chinese could potentially lose access to international cryptocurrency market as well.

All these factors serve as indicators of future restrictions that are about to impact the cryptocurrency industry in China.

Tags: bitcoinBitcoin NewschinaNewsokcoinpboctrading
TweetShare
BitStarz Player Lands $2,459,124 Record Win! Could you be next big winner? Win up to $1,000,000 in One Spin at CryptoSlots