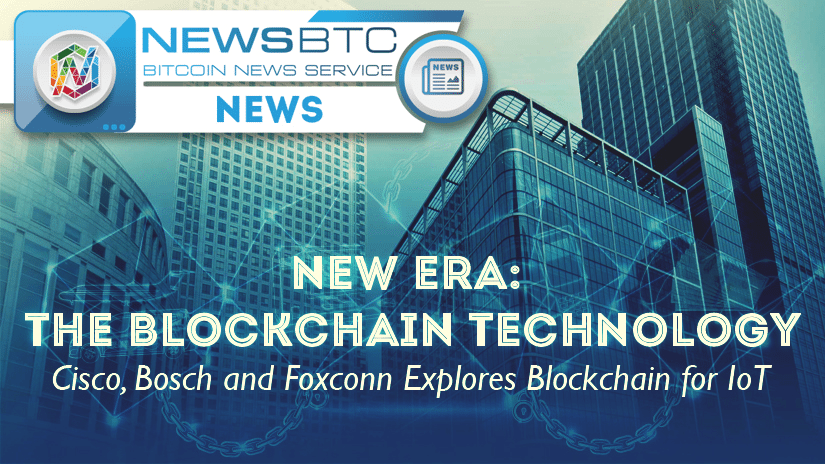 Three leading tech players, Cisco, Bosch, and Foxconn have joined hands to create a blockchain consortium. The group will be focusing on implementing Bitcoin’s underlying technology to the Internet of Things segment.

Cisco is known for its networking and telecom prowess. Similarly, Bosch has a strong foothold in the consumer electricals market while Foxconn is known for manufacturing consumer electronics. With IoT being another hot segment, the three tech partners are in the right place at the right time. Other participants in the consortium include Bank of New York Mellon, Gemalto — a security company and other blockchain startups like ConsenSys, BitSE, and Chronicled.

According to reports, these companies will be working in collaboration to create a shared IoT blockchain protocol that can connect everyday objects of all sizes to the internet. These networked objects will be able to send and receive data.

The secure and tamper proof nature of cryptocurrency blockchain will be utilized by the consortium to ensure the security of the connection between various IoT devices. The increasing need for securing IoT devices emerged after a massive DDoS attack on the internet exploited several connected devices to do their bidding. With the implementation of IoT devices slated to increase in the coming years, it is the right time to explore all available and potential options.

Highlighting the need for security, the Director of Product Strategy at Gemalto, Joe Pindar said,

“Securing identity for physical property and packaging is going to be a big business opportunity over the next decade, high-value parts of logistics supply chains and regulated industries like energy, pharmaceuticals, and cold chain could all see a blockchain component over the next decade.”

Pindar’s statement confirms the inevitability of blockchain revolution. No industry sector can currently ignore the rise of cryptocurrency technology and expect to last another decade. The IoT consortium is just one among several industry-specific working groups and consortiums created across the world to develop and implement distributed ledger solutions in their respective domains.

Tags: blockchain consortiumblockchain technologyboschCiscofoxconnIoTNews
TweetShare
BitStarz Player Lands $2,459,124 Record Win! Could you be next big winner? Win up to $1,000,000 in One Spin at CryptoSlots