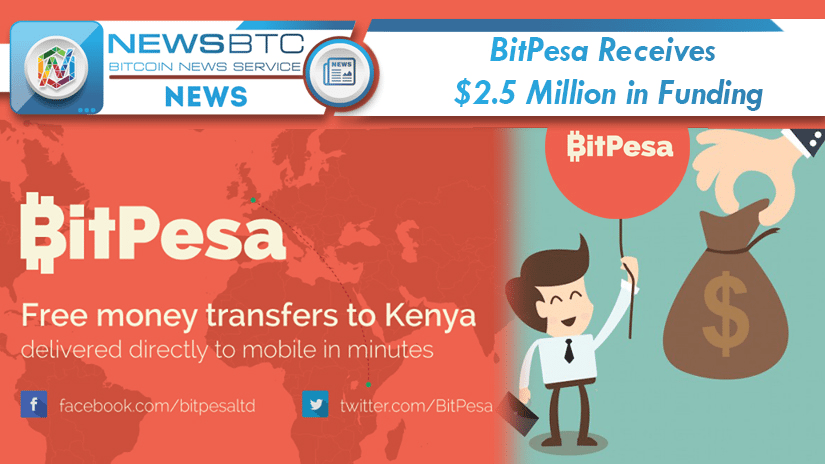 The leading African Bitcoin payments startup, BitPesa has successfully raised $2.5 million in Series A funding. Led by Draper VC, Greycroft LLC and other existing investors have participated in the company’s latest fundraising round.

BitPesa has established itself as one of the leading cryptocurrency businesses in Africa. The Kenyan company has been proactive in the region’s financial sector by offering Bitcoin-powered financial services to the unbanked and the underbanked population.

The company started as a Bitcoin alternative to popular MPesa mobile payments system. It allows people to send/receive funds and also make payments to businesses for goods and services, all with Bitcoin. Recently BitPesa introduced a new B2B service, designed to help small and big businesses in the African nations to trade with their suppliers and business counterparts in China, UK, and the United States.

Many African countries have a weak banking network, and the existing branches charge exorbitant fees for processing transactions. The cost and speed of transactions has been affecting many import-dependent businesses. There are reports of people using unauthorized third party financial services and even couriers in many instances to deliver money to their suppliers. BitPesa’s B2B service targets these businesses, offering them a way to transfer Bitcoin directly into the bank accounts of their Chinese vendors. The service is currently available in Kenya, Nigeria, Tanzania and Uganda.

Some of the well-known names in the investment community like Digital Currency Group, Blockchain Capital, Panthera Capital Management, BnktotheFuture, Zephyr Acron and FuturePerfectVC have also pitched into the Series A fundraising round.

According to BitPesa’s CEO Elizabeth Rosielleo, the company will be using the funds to focus on acquiring more customers while expanding its business in Nigeria. There have been numerous reports on the growing Nigerian Bitcoin community. According to available statistics, the demand for Bitcoin in the country increased since mid-December 2016. The total weekly volumes exchanged on LocalBitcoins along is said to be more than $1.3 million. The growing interest is a good sign for BitPesa as a prior understanding of cryptocurrencies among the masses will make it easier for the company to onboard new users.

Tags: bitcoinBitcoin NewsbitpesainvestmentNews
TweetShare
BitStarz Player Lands $2,459,124 Record Win! Could you be next big winner? Win up to $1,000,000 in One Spin at CryptoSlots