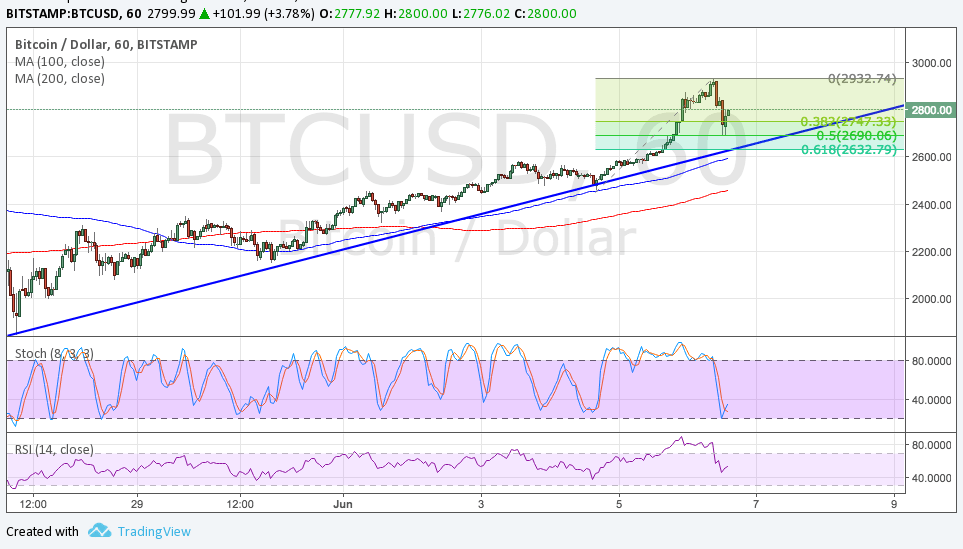 Bitcoin price is back to its highs and is making a small correction to allow more bulls to join the bandwagon.

The 100 SMA is above the longer-term 200 SMA so the path of least resistance is to the upside. In addition, the 100 SMA is close to the rising trend line connecting the lows since the last few days of May, adding to its strength as a floor.

Applying the Fibonacci retracement tool on the latest swing low and high on the 1-hour chart reveals that the 61.8% level coincides with the trend line and the $2600 support. A break below this area could lead to a move towards the 200 SMA dynamic inflection point, but a break below the $2400 mark could mean a reversal.

Stochastic is still pointing down to show that sellers are regaining control after the latest rally. RSI is also pointing down so bitcoin price might follow suit. However, once both oscillators indicate oversold conditions and turn higher, buying pressure could resume and bring bitcoin back up to the swing high and beyond. There are a few factors dragging the dollar lower across the board lately and boosting bitcoin price. For one, there’s the testimony by former FBI head Comey in front of Senate on Thursday, and any evidence of wrongdoing by the administration could spur more dollar losses on weaker expectations of fiscal reform.

There’s also the dismal NFP report released last Friday that led traders to doubt that there will be any tightening moves beyond June. Also, reports that China will be buying US bonds has dragged yields down, along with the currency.

In contrast, bitcoin price is being supported by persistent geopolitical risks, particularly the upcoming UK elections and tensions among the Gulf states.