CryptoPing Gets over 30000 Potential Subscribers, ICO to End Soon 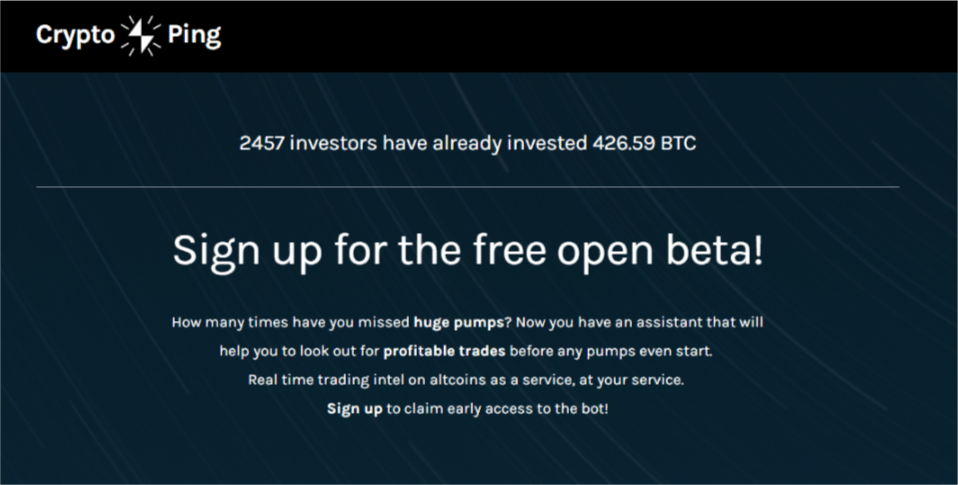 CryptoPing is a step closer to making trades highly profitable for cryptocurrency traders as its ongoing ICO moves closer to a successful completion. The ICO, allowing cryptocurrency community members and investors to purchase PING cryptocurrency against a range of cryptocurrencies to become part of the initiative.

The ongoing crowdsale involving Waves Platform based PING tokens will help CryptoPing raise the much-required funds to further develop its cryptocurrency trading signals bot on Telegram and other platforms. Currently available in beta, the CryptoPing bot keeps the users updated about the market conditions across three exchanges — Poloniex, Bittrex, and Cryptopia, with more to be added soon. According to the development team, they are currently in the process of adding another exchange to the list of platforms analyzed by the bot for providing relevant information to its users.

CryptoPing already has over 30000 users who are waiting for the subscription based service along with social sharing. Also, the numbers are constantly increasing as at least 500 new users are joining CryptoPing on a daily basis. The company has stated that over 65% of the target funds has already been raised by the platform and in the coming days. The CryptoPing ICO will be open for another three days, and those who are interested in being part of it have to do so soon.

Once the public release goes live, users can choose to either avail the free service or the subscription based one. Those opting for the subscription will have to pay a fee of 0.01 BTC/month in PING tokens. Subscribers of CryptoPing will receive priority signals, delivered to them immediately, along with options for personalization, detailed analytics and early access to new features. They will also gain access to the upcoming Social Trading platform. However, the free service won’t include all these, but only access to signals which will be delivered after it is sent out to subscribed users.

CryptoPing expects to launch the public version of the platform very soon, which will be followed by more features.