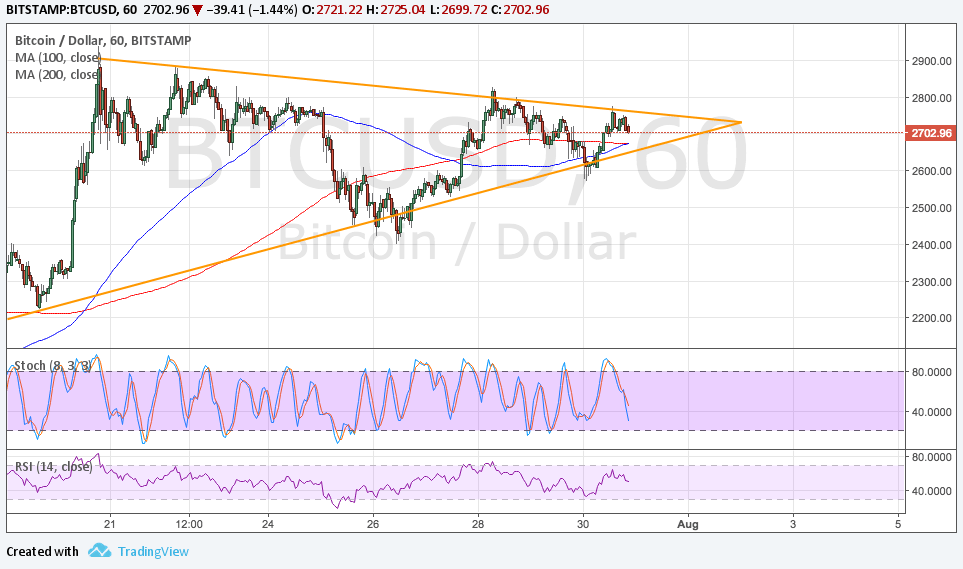 Bitcoin price is stuck in consolidation as traders are biting their nails ahead of a big market catalyst.

The 100 SMA is crossing above the longer-term 200 SMA to signal that the path of least resistance is to the upside. This could mean that the triangle support could be more likely to hold as a floor than to break or that an upside break past the resistance around 2750 might be underway.

Note that the triangle formation spans 2200 to 2900 so the resulting breakout could last by the same amount. However, the moving averages might also be oscillating to signal that further consolidation is possible.

Stochastic is on its way down so bitcoin price might follow suit. RSI is also heading south to signal that sellers have the upper hand for now. But once both oscillators hit oversold levels and turn higher, buying pressure could return.

Also note that the triangle support is steeper compared to the resistance, which is also indicative of stronger buying pressure. Traders are playing it safe ahead of the August 1 upgrade to SegWit as this could signal whether or not hard fork issues could continue to stay in place. Over the weekend, a number of exchanges already issued warnings to their clients about holding bitcoin deposits and the potential incompatibilities that may arise.

If the industry is able to emerge from this test unscathed, bitcoin price could be on its way to break past its record highs. On the other hand, weak support for the new version of the software could mean more losses for the cryptocurrency. Also, additional volatility is to be expected as the shift draws near as evidenced by the market reaction to the other week’s BIP 91 lock-in.