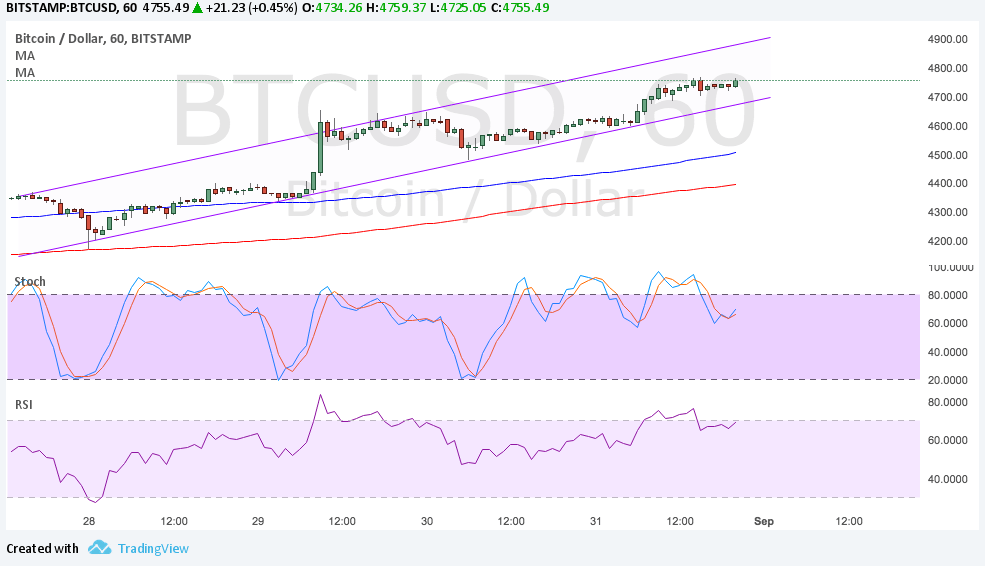 Bitcoin price is safely inside its ascending channel pattern visible on the 1-hour time frame, but there are signs of slowing upside momentum.

The 100 SMA is still above the longer-term 200 SMA so the path of least resistance is to the upside. However, the gap is narrowing to indicate a slowdown in the rally. A break below the channel support could lead to a pullback to the moving averages’ dynamic support levels at $4500 and $4400, which are also around the bottom of a longer-term channel.

If bulls stay in control, though, bitcoin price could make its way to the top of the channel at $4900 or all the way up to the $5000 handle. Changing market sentiment for the dollar and month-end profit-taking has drawn investors towards bitcoin instead, especially since there are geopolitical risks in play. Although risks of a missile strike from North Korea appear to have faded, the focus is now on the goings-on inside Washington.

In particular, Treasury Secretary Mnuchin started talking tax reform and adjusting the debt ceiling deadline earlier in order to get funds for Hurricane Harvey relief efforts. He also talked down the dollar in saying that, while the gains are understandable due to stronger economic performance and confidence in the currency, a weaker dollar would be more desirable.

The spotlight is now on the US NFP report as a strong read could renew Fed rate hike hopes while a downbeat figure could mean more dollar weakness versus bitcoin.