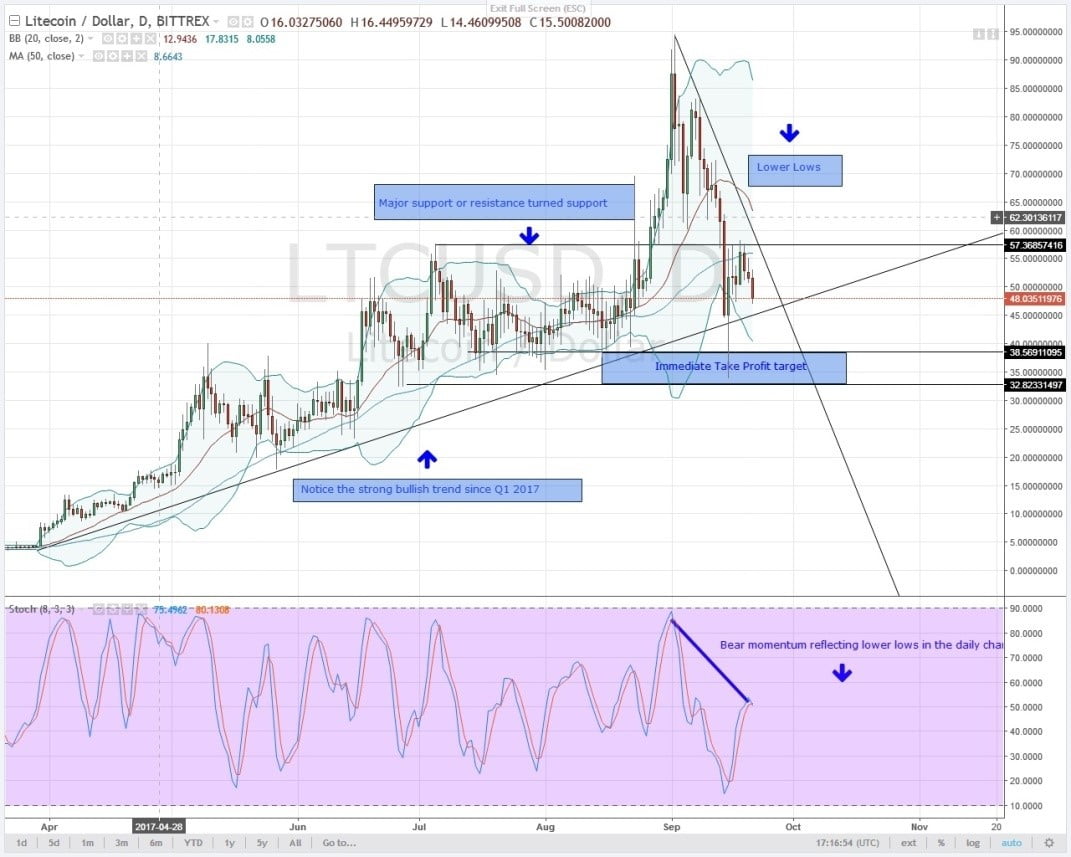 LTCUSD topped on 02.09.2017 with very strong price rejection at 93.00. This was consequently confirmed by stochastics when a sell signal was printed. Further weakness was expected after the formation of that double bar reversal candlestick and bear engulfing pattern. With this breakdown, the first major support was broken on 14.09.2017 at 57.00.  Price retested this level again on 19.09.2017 and confirmed it as support turned resistance.  Stochastics are turning lower, so ideal first take profit will be around 30.00-34.00 with 19.00 as the next target.

After a sustained rally in 2017, a correction is on the cards. There are a couple of whipsaws around 360-405 all-time highs. The only thing that can change forecast is if there is a break above yesterday’s highs of 370.00 which is also a minor resistance. If price action is restricted below the major resistance trend line drawn from 26.08.2017 and 02.09.2017 highs coupled with stochastics downturns, then bear momentum should continue. Ideal take profit will be 15.09.2017 lows of 225.00

One thing is clear unless price action stays below 0.25 which is the recent support turned resistance in the daily chart, bears will be in charge. You also note that at 0.25, price action tested the 50-period moving averages which acted as a flexible resistance line. Other than accumulation which has happened in the past 8 trading days-from 14-15.09.2017 double bar reversal pattern testing this month’s lows of 0.16, there are no significant price swings in either direction. Bears are obviously in charge with stochastics turning lower after yesterday’s bear candlestick confirmation.

If all things are kept constant, key resistance trend lines have remained intact. As a major characteristic, most altcoin pairs turned lower after beginning September 2017. Since then it has been a one-way traffic towards major support zones. There was a bear crossover between the 20 and 50 period moving averages after 16.09.2017 signaling bears. Also, the 50-period moving-average, in particular, is acting as a boundary and resistance zone alongside the major resistance trend line. Sellers should hold their positions and wait for a support retest between 0.24-0.39

Is this pair topping? Most likely it is. This is after that 1400% appreciation this year alone. Rising from lows of 10 to highs of 150 in August 2017, it has been a spectacular rise with super capital gains. For 10 days after 18.08.2017, price appreciated 1000% and this was a speculative rally because as prices were making higher highs with strong candlesticks, stochastics were turning lower forming a clear bear divergence pattern. Technically, that accumulation between 22-24.09.2017 means this is a zone to take note off and therefore, 85.00 remains a region of support and any break below that means testing 07.06.2017 highs or 15.09.2017 lows.

As USD is the quote currency, any major economic announcement from the US will tend to influence these cryptos. So far, Yellen and Fed are set to announce key monetary policy changes and therefore, the USD should gain at least in the short to medium term.

Tags: altcoin analysisDashIOTAltcXEMXMR
TweetShare
BitStarz Player Lands $2,459,124 Record Win! Could you be next big winner? Win up to $1,000,000 in One Spin at CryptoSlots