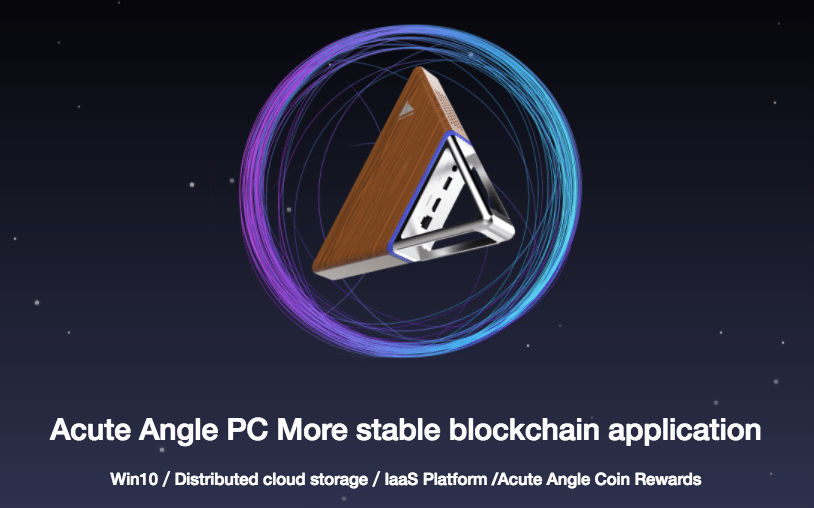 Acute Angle PC had been launched on its official website at 12:00 on December 12th. This is a universal hardware host based on IPFS point-to-point hypermedia protocol storage and Acute Angle Chain management of digital assets and formulating reward system for the users through smart contract. In the future, Acute Angle Cloud will offer more massive services to provide users on the cloud with CDN acceleration services that better meet the needs of the Internet business. Users can not only earn Acute Angle Coin by sharing the idle storage space and bandwidth through Acute Angle PC but also easily win community rewards and technological innovation bonuses by sharing contents.

The significance of Acute Angle PC’s research and development lies in that it can bring users point-to-point information dissemination at lower costs and has made a great contribution in the direction of globalization. In addition, Acute Angle PC also has the necessary advantages of long lasting storage and great stability to go global. Let’s take a closer look at its advantages. It solves the waste of storage space through distributed storage technology and automatically reallocates data to improve utilization of storage space and connect all computing devices with the same file system.

Its principle lies in that the domain-based address is replaced with the content-based address, that is, the user is looking for the content stored in an address instead of the address itself, and there is no need to verify the identity of the sender, but only verifying the hash of the content. In this way, the web pages can become faster, more secure, more robust and more durable.

Lower cost of use

The distributed IaaS platform is realized through technologies such as blockchain, cloud computing, and IPFS to subvert the operation mode of the traditional centralized computer room with high operation and maintenance costs and makes rational use of idle resources and returns benefits to users.

The biggest difference between Acute Angle PC and OneCloud, LLT Box is the form of the equipment. The essence of Acute Angle PC is a computer based on blockchain technology with the Windows10 system, the latest Apollo N3450 14nm quad-core microprocessor of Intel, 8+64G internal memory, solid node storage with capacity of 128G or larger, which is safe and high-speed with node storage. Thus, it can not only be used for mining, but also for daily office working and entertainment. The other two are private Nas (Network Attached Storage), and if users use Nas’ memory, the unused space for digging up the mines is more limited. In addition, Acute Angle PC’s service system also surpasses the only cloud storage services of the other two devices, and constructs a better global distributed IaaS platform.

At present, we have already released the White Paper and the product has drawn the attention of many investment institutions.

For more information, please go visit our official website: www.acuteangle.com and leave your email to be the first to know any updates regarding the product.