Next Article: As Brexit Negotiations Ensue, How Will Ongoing Uncertainty Affect the Financial Markets?

After penning an article critiquing Szabo’s law, Vlad is clearly of the opinion that there ought to be an element of human participation within the Ethereum governance model. Nonetheless, Ethereum (ETH) prices are stable, and after three days of consolidation, it is likely that prices will edge higher with targets at $170.

Public blockchains are inherently fractious and often factions sprout disagreeing on improvements, upgrades or even a fruitful push for equal representation. We saw that happen with Bitcoin Cash when contentious led to a split creating two chains in SV and ABC.

However, it is the current flame-throwing and uncomfortable topic of how best to deal with Parity Funds that is reviving the discussion on which governance model best suits Ethereum. As fractious and heated the atmosphere, well-articulated arguments from Vlad Zamfir is shedding light on the apparent lack of effective controls and human participation within Ethereum and the tendency towards adherence of Szabo’s law.

Drumming for pro-governance, Vlad is against the idea of protocol improvements or changes on the ground of technical maintenance as stipulated by Szabo. He argues that the perception that code is law is a misnomer and “too radically anti-legal to be part of a sensible crypto legal system.” All the same, his beliefs are against what blockchain represents—autonomy.

As a network, it should operate free from third parties—in this case, government, even if solutions riding on these networks seem to go against the incumbent and disrupt the status quo. 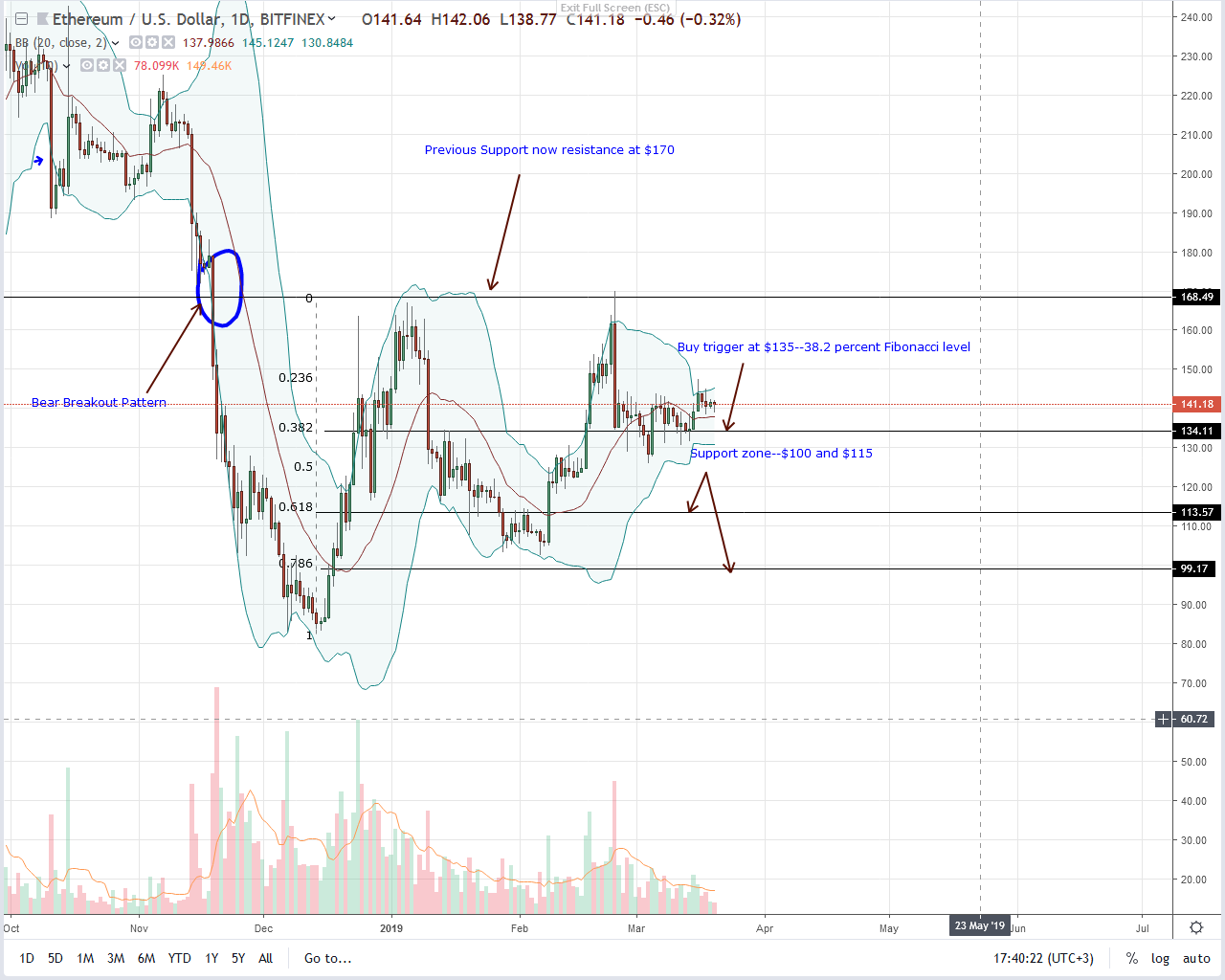 Already, increasing demand and positive fundamentals—especially Joseph Lubin’s comments—indicate there is an undervaluation.

However, before conservative traders flow in, prices must first close above $170. It is likely that prices will rally in the short-term now that BB bands are spreading and prices appear to be banding along the upper BB pointing to increasing demand.

Since Ethereum (ETH) prices are trading inside Mar 15-16 bull bars, then is imperative that prices close above $150 or dip below $135 as price action confirm bulls of Mar 5 or bears flow affirming those of Feb 24. In any case, accompanying transaction volumes must be above averages of 230k or above 300k of Mar 5.