Next Article: Bitcoin Has a Massive $80M Sell Order, But Breaching it Could Lead to a Rally

Vitalik admits that Ethereum’s novelty is ending and competitor platform offering speed and scalability is clipping part of their market share. According to DApp radar, only 28 percent of dApps are off the Ethereum platform. Meanwhile, Ethereum (ETH) bulls are up but yet to close above $150, our minor buy trigger line.

In a decentralized and open source system, competition is bound to happen. Sometimes, it can be taken a notch higher, and the result is a contentious hard fork as interests clash. Ethereum hard forked once but what was on stake is millions of dollars after the infamous DAO hack. Since then, there has been an evolution and Metropolis was well handled though there were delays thanks to bugs and the miner community disagreeing on EIP 1234 reward slashing.

While novel and the king of smart contracts, Ethereum is struggling with low throughput and can’t scale to compete against new, scalability and speed oriented competitors like Tron and EOS for example. To compensate for speed and scalability, Ethereum replaces that with a vibrant developer community. Besides, it is decentralized. Nonetheless, that is not preventing projects from migrating.

Admitting to their waning influence, Vitalik is unfazed although the number of dApps running on their network is dropping. According to statistics from DApp Radar, only 28 percent of all dApps are based on Ethereum’s smart contract with most running off EOS which take the mantle, ranking first in the latest CCID list with 48 percent of all dApps launching in the scalable platform. 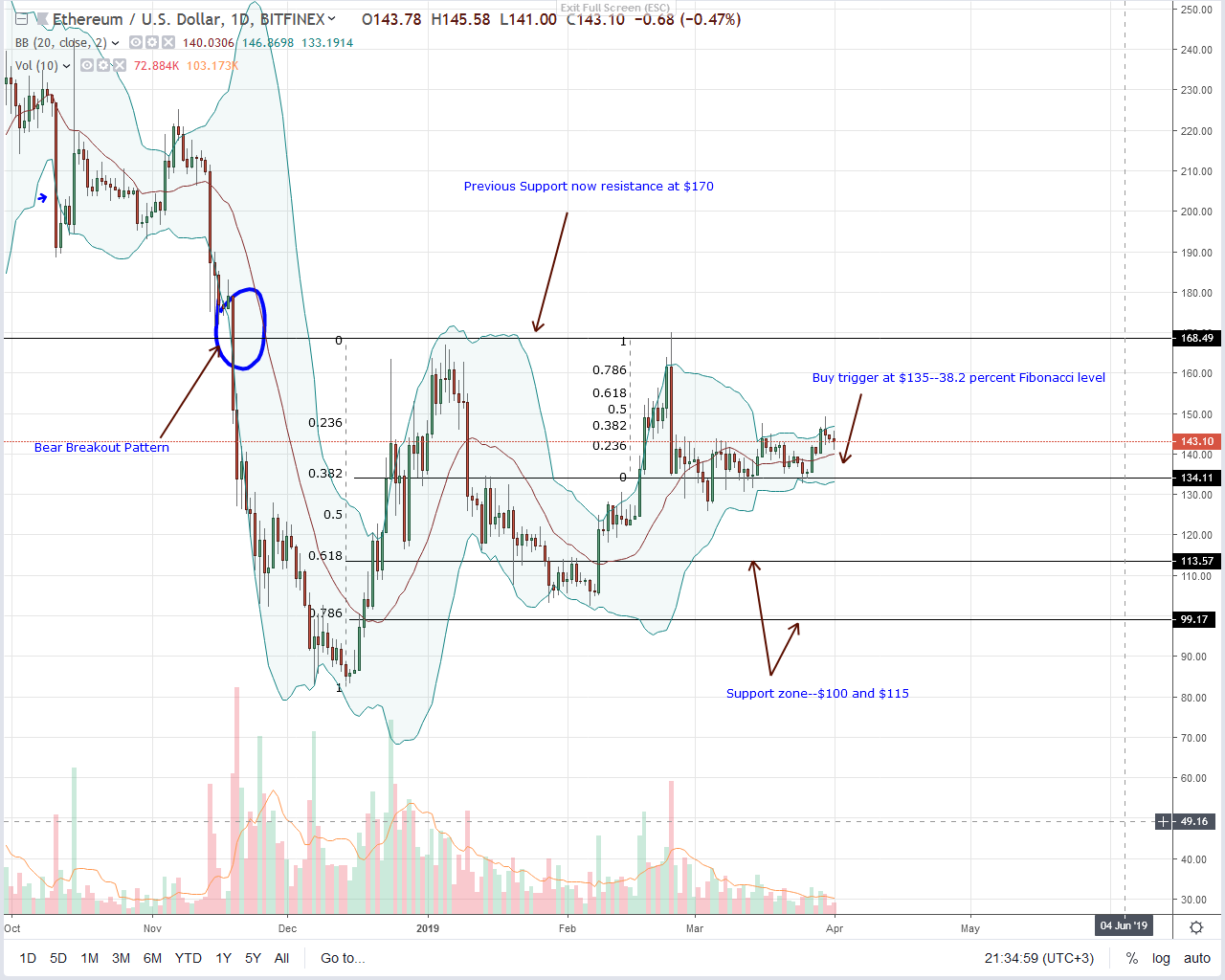 At spot rates, Ethereum (ETH) second with a market cap of $14,893 million and up 3.8 percent in the last day. Even so, performance is not as stellar and is lagging competitors as EOS—up 14.9 percent and Cardano (ADA) up 14.6 percent within the same time-frame.

All the same, we expect prices to print higher, and in line with our last ETH/USD trade plan, the only time we shall recommend ramp-up is when there is a satisfactory break and close above $150. Before then, we acknowledge the liquidation effect of Feb 24 now that prices are reversing off the 38.2 percent Fibonacci retracement level based on the bear bar high low.

As a result, caution should prevail, but if prices surge above $170 nullifying the breakout effect of Q4 2018, then risk-averse traders can load up with the first target at $200.

Prices are higher, but transaction averages are lower, printing 104k by yesterday’s close. Ideally, any rally that will lift prices above $170 must be with above average volumes exceeding 302k of Mar 5 and even 880k of Feb 24 as per our trade emphasis.