There has been no dip this week as we have seen in previous ones. Usually after a bullish weekend, crypto markets cool off early the following week. This has not happened as Bitcoin has kept up its momentum driving total market capitalization higher still as it remains over $330 billion.

Bitcoin has made it back above $11,000 for the third time and has just hit a new 2019 high of $11,350. The king of crypto is still on a roll as it approaches resistance above $11.5k during Asian trading this morning. Daily volume is back over $20 billion and BTC market cap has just hit $200 billion as the train keeps on going cranking another 5 percent on the day.

Ethereum has inched back over $310 again but it has only made 2 percent and is only moving in the shadow of its big brother. There is very little else driving ETH at the moment which has been as weak as the rest of the altcoins.

There is a lot of green in the crypto top ten at the moment but gains are fractions of a percent for many. Bitcoin is clearly the dominance force yet again eating away at that altcoin market share. Tron has held on to its top ten position adding a further 3 percent today, and BCH is up around 2 percent. The rest have barely moved at all.

Top twenty crypto movements are equally lethargic, only NEO has made more than 4 percent as the Chinese Ethereum reaches $17.50. Cardano, Monero and NEM have added a couple and the rest are barely changed from yesterday’s levels. Ontology is close to regaining a top twenty spot with a 6 percent rise today.

VET has done very little this year but a 28 percent pump today may change that. FOMO has been induced from a rumored Walmart tie up with VeChain as volume surges and the token hits 1 cent for the first time in months. VET market cap is now over $500 million as it moves up to 27th place.

Following a dump earlier in the week Insight Chain is back up 40 percent today and Energi continues to climb with a further 35 percent added. There is a lot of FOMO going on with low cap altcoins today as at least twelve of them are in double digits. GXChain is getting hit at the other end of the crypto top one hundred as it dumps 10 percent, Decred is not far behind. 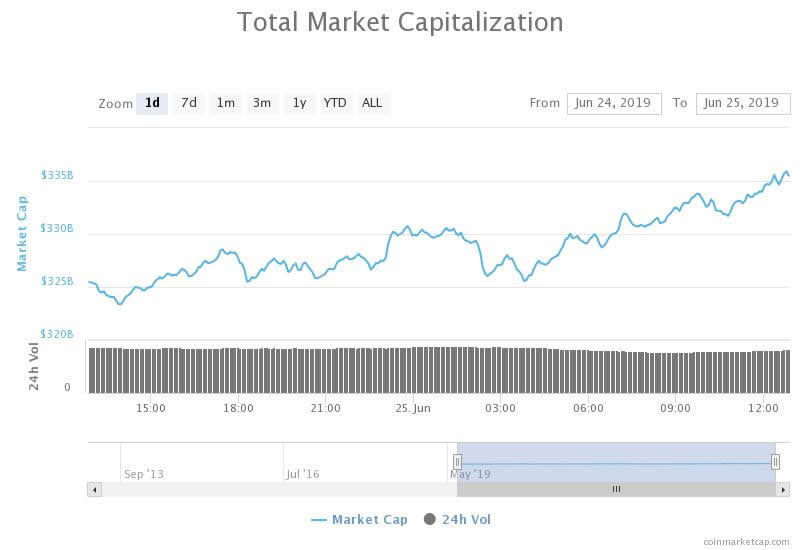 Total crypto market capitalization has gained over $10 billion in 24 hours to hit a new 2019 high of $336 billion. Low cap alts are not making a dent and only Bitcoin is driving it up as dominance reaches 60 percent again. Over $50 billion has been added since the same time last Tuesday as BTC pumps 20 percent in a week. Altseason is still nowhere to be seen.

‏Market Wrap is a section that takes a daily look at the top cryptocurrencies during the current trading session and analyses the best-performing ones, looking for trends and possible fundamentals.