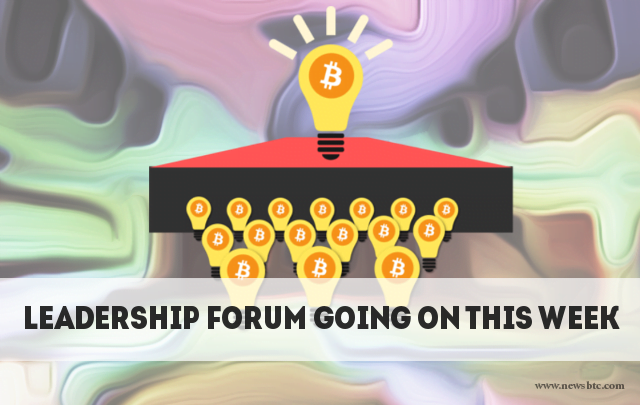 Bitcoin and Blockchain Leadership Forum Going on This Week

The inaugural meeting of the Bitcoin and Blockchain Leadership Forum will take place during the Social Media Leadership Forum this May 14. This marks the start of a new initiative geared towards exploring the potential of bitcoin and other cryptocurrencies.

Invites to the event have been limited, with the organizers sending details through their mailing list or via social media. The Social Media Leadership Forum is a membership organization that organizes periodic events focused on business-related aspects of emerging digital technologies, hosted in the offices of a variety of world-leading member organizations based in London.

Apart from bitcoin enthusiasts, the forum also includes representatives from the London School of Economics and the Bank of England. Bear in mind that the BOE has been known as one of the few central banks that has taken an open-minded approach towards bitcoin and blockchain technology.

Prior to this, the BOE has published a paper on the innovations in online payment and the emergence of digital currencies. The paper covers the rise of bitcoin, which has sparked the creation of decentralized payment systems, and acknowledged that the underlying blockchain technology is a significant innovation. The paper also indicated that these new developments could revolutionize the financial industry, starting with the monetary system.

“Digital currencies do not currently pose a material risk to monetary or financial stability in the United Kingdom, but it is conceivable that potential risks could develop over time,” concluded the Bank of England’s report. “The distributed ledger is a genuine technological innovation that demonstrates that digital records can be held securely without any central authority.”

London is eyed to be the global hub of bitcoin, as the rise in cryptocurrency groups and discussions have paved the way for more productive discussions and innovations. According to a report by the Financial Times, both the U.K. government and Bank of England having made recent moves designed to stimulate the development of digital fintech.

BitStarz Player Lands $2,459,124 Record Win! Could you be next big winner?
Get 110 USDT Futures Bonus for FREE!
Read our comparison of 50 different crypto casinos. Find out who has most generous bonuses, best UX, knowledgeable customer support and best provably fair games.
Tags: Bank of Englandbitcoin discussionsbitcoin forumBitcoin Leadership Forumbitcoin londonblockchainLondon School of EconomicsNews
Tweet123Share196ShareSend
Win up to $1,000,000 in One Spin at CryptoSlots