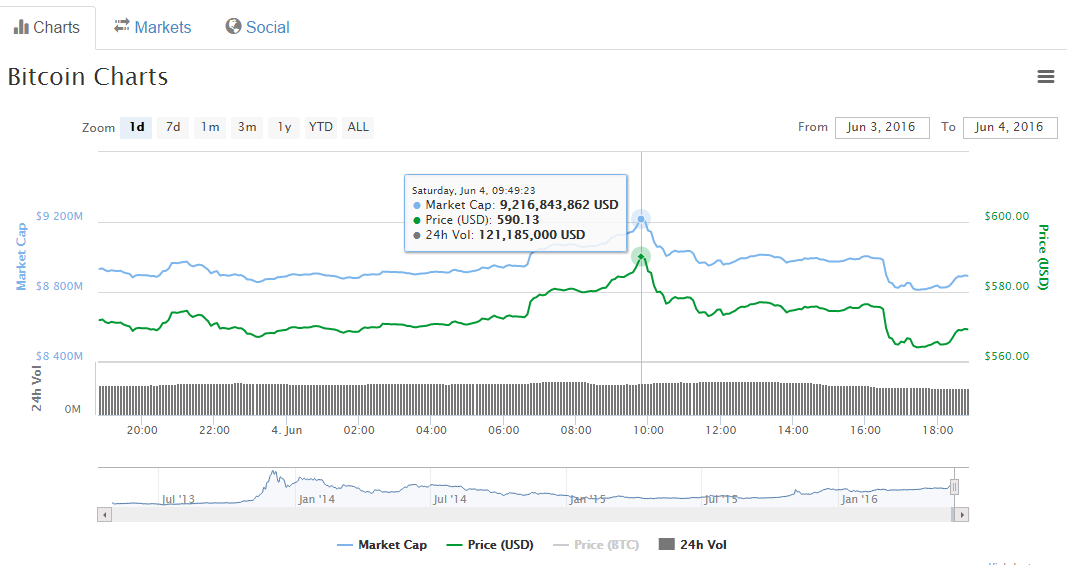 Bitcoin has been going strong since the past two weeks, where the value of digital currency increased from a stable price of around $450 to reach $569 with brief price hikes extending beyond the final value in between. The increased demand for bitcoin has been attributed to the activity in the Chinese market, where people are said to be investing in digital currency due to lack of other options. As the value of Chinese yuan declines, people are looking for investment options to prevent their earnings from losing value. Strict capital controls implemented by the government has prevented them in putting their money into other international investment vehicles.

In addition, people are more actively investing in the digital currency expecting its value to further increase next month as the Bitcoin network goes through halving. The halving will result in miner rewards for block discovery reduced by 50 percent, which will also mean that the rate of generation of new Bitcoin crypto tokens reduces effectively, which combined with constantly increasing usage will create more demand resulting in an increase in value. Making it more interesting is the favorable regulatory environment, as countries take a wait and watch approach towards the digital currency revolution, lest they hamper innovation by introducing strict regulatory measures.

At the current rate, we can expect Bitcoin to only strengthen its position in the cryptocurrency ecosystem with the market capitalization further increasing to reach the $10 billion mark. At the current rate, if there is no significant surge in price, we can expect bitcoin to break the $10 billion market capitalization by the end of this year at the price of $625 per bitcoin. However, it can come sooner if the price continues to exhibit a positive upward trend.

Read our comparison of 50 different crypto casinos. Find out who has most generous bonuses, best UX, knowledgeable customer support and best provably fair games.
Tags: bitcoinBitcoin NewsBlockchain Technologyhalvingmarket capitalizationNews
Tweet123Share196ShareSend
Win up to $1,000,000 in One Spin at CryptoSlots