China may be restrictive, but Chinese miners plays a vital role in the Bitcoin ecosystem. Therefore, despite the People’s Bank of China stance, the ruling from Hangzhou Internet Court is bullish. Currently, BTC is up 3.8 percent week-to-date.

Chinese policies are against the proliferation of digital currencies. Nonetheless, that is not to say the country is not instrumental in the thriving Bitcoin economy. Several studies show that over 60 percent of Bitcoin’s hash power is from the strict nation.

Although Bitcoin is global, with its main value proposition being security over performance as throughput attests, BTC related news from China tends to affect market sentiment and price. Case in point is the decision by the Hangzhou Internet Court, recognizing Bitcoin and classifying the world’s most valuable digital asset as a property.

Commentators say this is a significant milestone. In particular, Dovey Wan, the founding partner of Primitive, said that was a watershed moment for Bitcoin. Positive as it may sound, the decision is not an express regulatory thaw. That is so because the officials from the People’s Bank of China (PBoC) are adamant that Bitcoin is not fiat money. 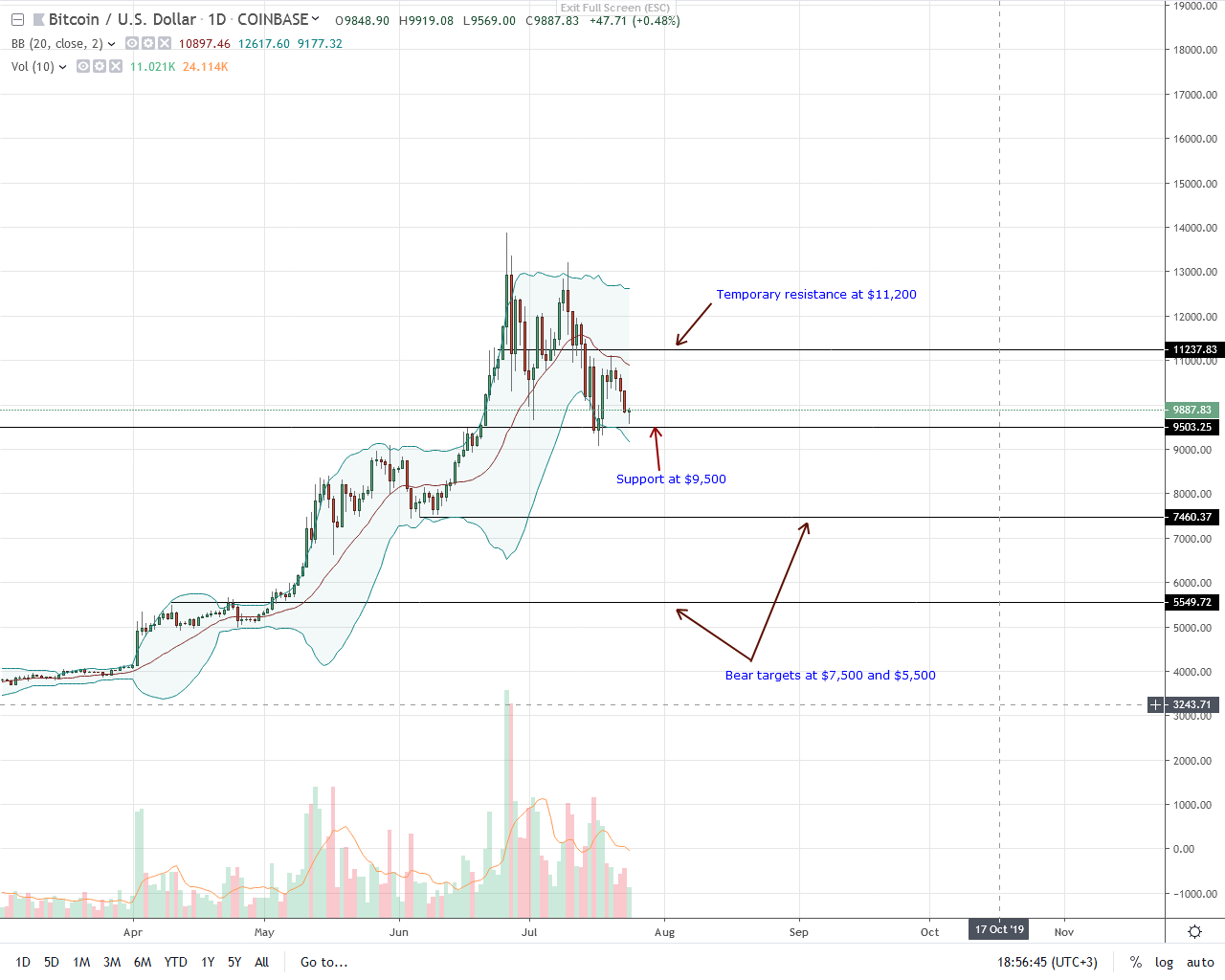 Supportive as it is, the Hangzhou Internet Court decision was not enough to prop Bitcoin prices. In a negative trajectory, even after the announcement, sellers are firmly in control. Therefore, unless otherwise there are sharp gains lifting prices above $11,200, every high is technically a liquidation opportunity for savvy traders.

Note that prices are oscillating and held within the July 16 bear candlestick. The bar, confirming sellers of July 14, is therefore significant in this trade plan. Not only does it point to bears but from an effort versus result point of view, its low is a critical support level.

As such, as per previous assertions, any dip below $9,500 could spur a selloff towards $7,500. Technically, that would confirm sellers of late June 2019. In that case, the first bear target will be $7,500. If sellers are persistent, then the second feasible target will be at $5,500.

Visibly, BTC/USD price action is ranging. Bullish above $9,500, BTC must find support at this reaction point. Marking a trend shift ought to be a spike in participation, with trading volumes exceeding 82k of June 26.

If the break out bar is distinct with high participation exceeding 82k, then BTC would likely drop to $7,500 as aforementioned. If not, and there is support at $9,500, with equally high trading volumes, BTC will probably snap back and rally to $11,200 in a trend continuation phase.

Tags: bitcoinbtcHangzhou Internet Court
Tweet123Share238ShareSend
BitStarz Player Lands $2,459,124 Record Win! Could you be next big winner? Win up to $1,000,000 in One Spin at CryptoSlots