Despite Bitcoin (BTC) Stagnation, Economist Has High Hopes For The Crypto

Andrew G. Haldane, the Chief Economist of the Bank of England, believes Bitcoin will be money in the next two to three decades. Presently, BTC is trending within a $30 range as bears attempt to press lower.

Well, it has been a see-saw for Bitcoin and most cryptocurrencies because of their direct correlation with the king. Although some skeptics as Roubini and traditional market influencers as Kevin O’Leary of Shark Tank have their doubts, Bitcoin performance over the last decade is impressive. Designed to counter bankers and decentralize control, Bitcoin is now a global phenomenon. It is the basis of research and a blend of various disciplines, including Economics and Cryptography.

According to Andrew G. Haldane, the Chief Economist of the Bank of England, the peer-to-peer electronic cash will be money in the next two to three decades. While addressing students, an eyewitness said:

“Mr. Haldane said it [Bitcoin] could replace cash. He even joked about us likely having Bitcoin in our wallets. He said he didn’t think it’d replace cash tomorrow, but he was quite open to the idea 20 or 30 years down the line. He was also quite familiar with cryptocurrencies and joked that there were now thousands of them.” 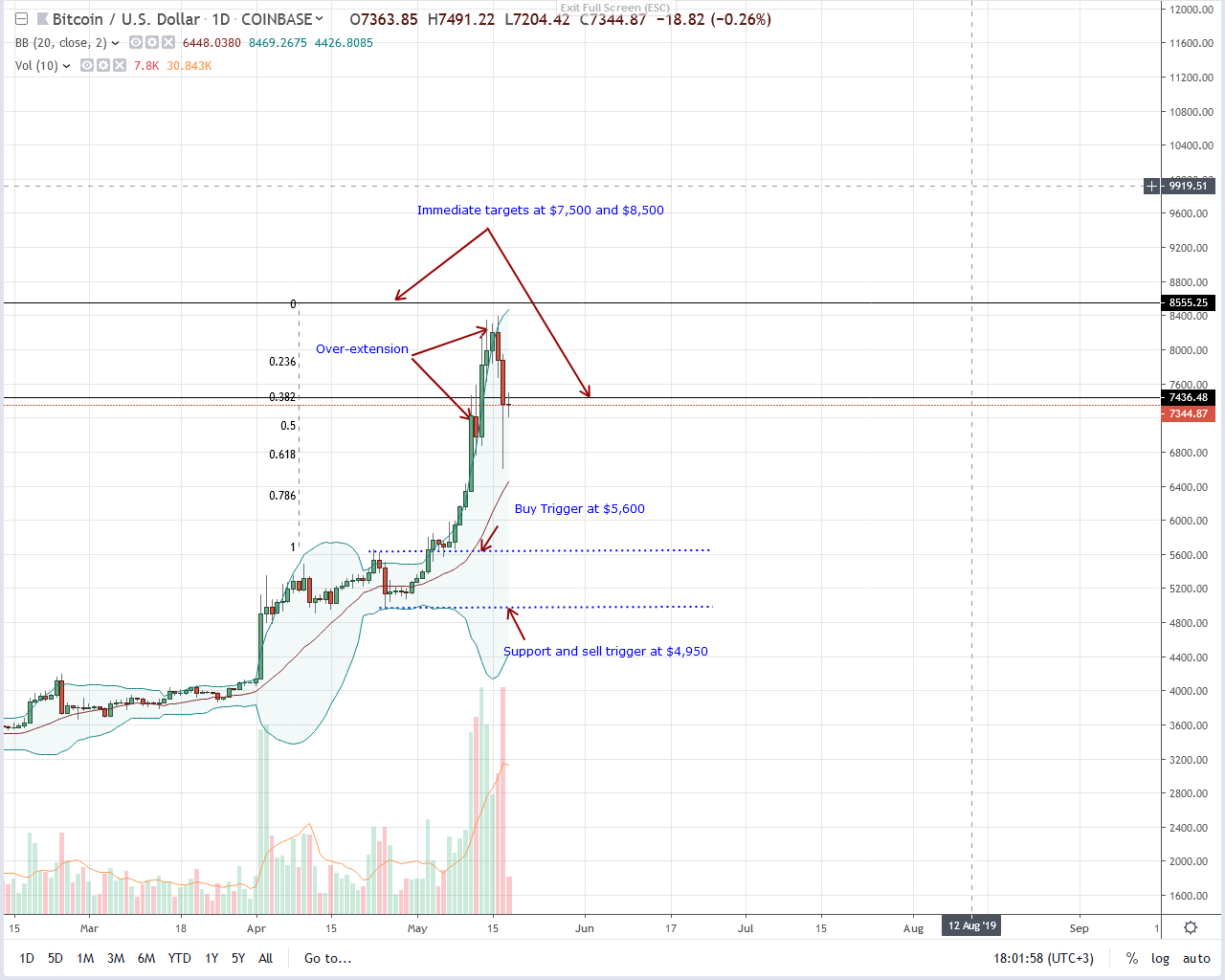 Meanwhile, bears are tapering and bear momentum slowing down. Bitcoin (BTC), although up 2.1 percent at the time of press, is correcting, printing lower lows albeit in tight trade ranges. Simply because of this, our last BTC/USD trade plan is valid.

Despite yesterday’s long lower wick hinting of support in smaller time frames, the fact that prices are trending in a $60 range just above the middle BB is a hint of underlying demand. Even so, the failure of buyers to print higher and prevent liquidation as volumes shrink is an indicator of sell pressure.

Pasting a simple Fibonacci retracement tool on May high-low reveals that yesterday’s prices retested the 78.6 level. However, typical of Bitcoin corrections and even with today’s pull-back, we expect a retest of the $6,300 mark before Bitcoin snap back to the primary trend.

Therefore, for trend continuation or nullification, any bar closing above $8,500 or $5,600 ought to be with high volumes exceeding 47k.