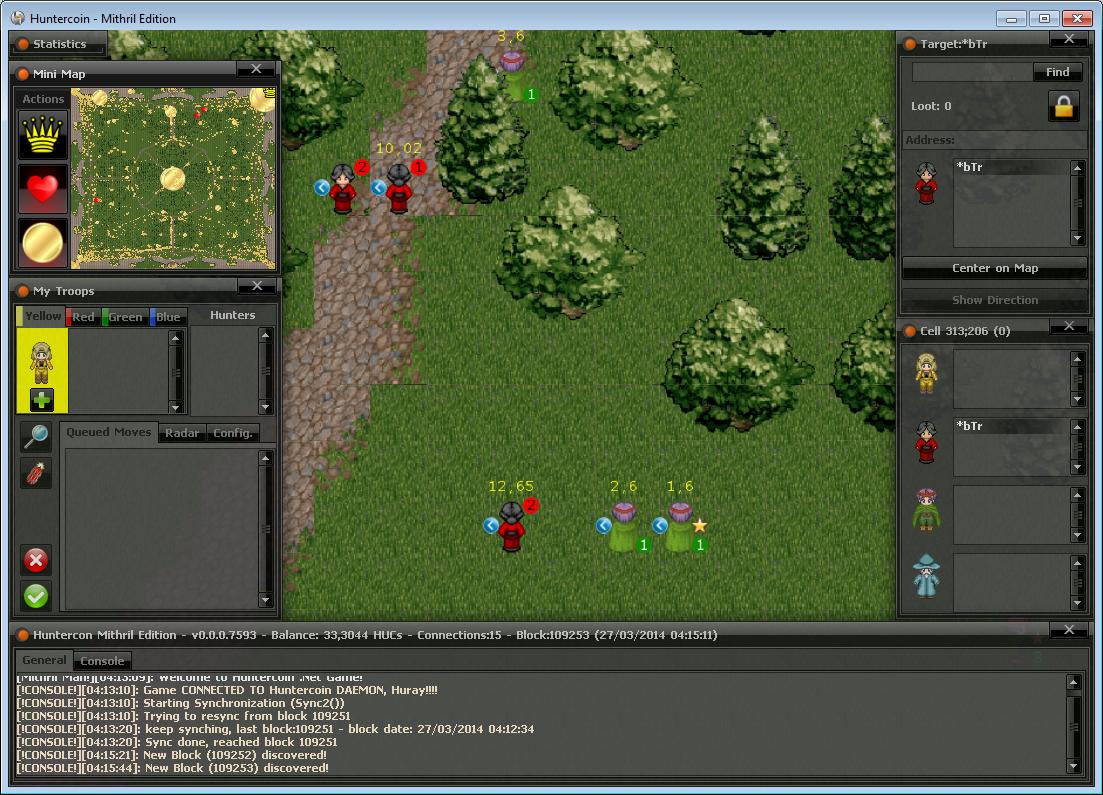 This game has received major updates. Read here for details.

The Blockchain Gaming series has covered nearly every major development in its namesake niche, and many people have caught onto the opportunity cryptography represents for the gaming industry. The Munne Project appears to have been a cheap way to capitalize on this, while other titles like Spells of Genesis use it only partially for things like in-game smart property.

The Huntercoin team, however, had one dream: to build a game that is fully and completely decentralized, the pinnacle of blockchain gaming. Like most dreams, it wasn’t easy to accomplish; they encountered ample drama along the way, and dealt with the financial constraints typical of underground projects. Now, however, all of that hard work is finally beginning to pay off.

Huntercoin doesn’t really have a much of a story. Its out-of-date website contains a page describing the game universe, but it comes across as a little hokey: humans can control special matter forms called Hunters in the Chronosius realm, which has a different concept of time and is the source of all huntercoins (HUC). Basically, it was contrived to fit the game mechanics.

The story of Huntercoin’s creation, on the other hand, is an epic tale, and the beginning of the blockchain gaming movement. It started in 2013 as an experimental prototype, and quickly developed an online cult following with many prominent bitcointalk.org members in support. Drawing on tech enthusiasts’ love for video games, the most popular Huntercoin thread received over 380,000 views.

In February 2014, however, tragedy struck. Lead developer Mikhail Sindeyev—who was also behind Namecoin, from which the Huntercoin protocol was forked—passed away suddenly due to a stroke, leaving the blockchain gaming community in a state of shock and sorrow. Other notable backers vowed to continue the project, but development slowed to a crawl. The value of HUC crashed in March, and traded for less than 1% of their original price by 2015.

Despite these unfortunate setbacks, Huntercoin development continued. UK-based Andrew Colosimo (snailbrain), the original creator, announced that they would release a web browser client and mobile phone app; he also told me privately about some major surprises he has in store, which we’ll cover in a future article. Now, it’s just a matter of waiting to see if they come to fruition, which is a question of funding and manpower.

Meanwhile, the drama continues. AI bots plagued the massive multiplayer game, making it impossible for human players to compete. A few times, the world was even taken over by “dominators,” who created player characters in huge numbers. They used these to maintain strategic control of the map, keeping all of its loot for themselves until the developers added the Disaster feature, which killed everybody at random intervals. It is clear that Huntercoin’s story will be player driven and involve guilds or clans, like many MMO games.

Huntercoin relies on a novel concept known as “human mining.” Unlike Bitcoin’s hardware mining, wherein new coins are earned by working on math calculations, Huntercoin also distributes some in the built-in game world for you to collect. To do so, you must create one or more Hunters to traverse the map; this requires you to pay a 200 HUC fee, which becomes analogous to your Hunter’s health.

One Hunter damages another using the Destruct ability, which affects all other Hunters within one space of the attacker in a 3-by-3 square of devastation. This drains 200 HUC from any who are a different color (red, blue, green or yellow) from your own, a life-stealing attack which destroys any Hunters reduced to zero. Proper timing and the ability to predict your opponents’ movements are paramount to success.

To keep your coins safe, you must deposit them at “banks” generated randomly around the map. Upon landing on one, all of the coins your Hunter has collected from the map (minus a fee) will be redeemed to your Huntercoin wallet. Remain in the bank for three turns and your Hunter will disappear, returning most of its health to you in the form of HUC.

Spam—the P2P networking equivalent of button mashing—is prevented by small fees for the time being, 20 HUC to use Destruct. This incentivizes players to choose their attacks carefully; a bot would otherwise attempt to attack every turn. Some forgo combat entirely and focus on collecting coins, or look for the Crown of Fortune, an item which disables your Destruct ability but continuously generates bonus HUC.

Those who prefer player-versus-player combat will prey upon such pacifists. When not stalking the Crown-wearer, some will spend a lot of their time looking for newbies and people who’ve fallen asleep or aren’t paying attention. Others will imitate those targets, keeping idle Hunters around the map in preparation for an ambush. This game of cat and mouse usually spans hours.

Unfortunately, pure blockchain gaming is still very taxing on traditional hardware, so gameplay is often marred by technical problems. The QT Client on the Windows operating systems sometimes stutters, failing to process one of your moves or freezing entirely. This happens even in the best networking conditions; under poor conditions, the massive growth of Huntercoin’s blockchain makes it impossible to keep up to date enough to play (more on that, next).

This might be fixed by coming updates, however. New game clients under development are reported to be less buggy, and efforts to prune historical blocks and spent transactions from the wallet database will soon massively reduce its download size. The planned mobile phone app and web browser client will also make it easier for people everywhere to play Huntercoin without complex installation procedures.

Despite its problems, Huntercoin is unquestionably the most decentralized game on the blockchain gaming market. Everything from its development and launch to basic game design remains true to Satoshi’s legacy, which needs to be commended.

It is an open source initiative, developed collaboratively by members of the community. Unlike other blockchain gaming , there was never any initial coin offering, so everyone has an equal opportunity to buy HUC and contribute with whatever resources and skills they possess. This includes some of the newly-developed game clients, which are not all produced by the same people.

Instead of a central server, players interact with each other via a P2P network. Player characters are commanded by issuing transactions, which are confirmed and added to the Huntercoin blockchain by both SHA256 and Scrypt miners. All game data is stored there, where the rules are implemented as smart contracts—all terrain, coins and characters are inside the blockchain itself.

Miners are incentivized to secure this data by 10% of the block reward, which is currently 1/10 HUC every minute (on average). Like Bitcoin, this supply halves every four years, but instead ending with 42 million coins in circulation. Thereafter, miners will be competing for transaction fees, as well as the fees paid for various game actions.

Since Huntercoin uses two mining algorithms, each one targets a 2-minute block time, readjusting difficulty every block. This makes it virtually unhackable without the need for a central authority—the first and only decentralized autonomous video game. Players agree to the rules by adhering to a common version of the protocol. If significant disagreement arises, it could potentially result in a fork in the Huntercoin blockchain, which would be a natural part of the consensus-forming process.

If all goes smoothly, however, the world will have the first online game to be truly controlled by its community. Any forks that do occur in the future are likely to be the work of new video game developers, building new worlds inside different blockchains. Such competition will lead to faster block times and bigger blocks, allowing for more complex gaming experiences—perfect for Blockchain Gaming.

The graphics in Huntercoin are pretty basic, borrowed from the public domain and free sources due to the lack of a graphic designer. The landscape consists simply of trees, grass-covered ground, rocky ground, wooden palisades, some bricks, and the stone cliff faces which mark the boundaries of the map. All of them were designed by Daniel Cook, the author of the Lost Garden gaming blog.

Everything looks a little fuzzy, or “old school” to use the common euphemism. There are only a small handful of character models, which are sprites created by Sithjester. This is despite the game’s relatively high system requirements, which are a consequence of its overworked development team and unique game design.

Fortunately, Huntercoin is a work in progress. In 2015, developer wiggi began work on an update called BetterQT, which was intended to address the original’s poor usability. Along the way, he managed to significantly upgrade the graphics, increasing the resolution and making everything appear less 2-dimensional. Rocks and shrubbery have been added, existing terrain features create shadows on the ground, and the character models appear a little more diverse.

It’s still very difficult to get up and running, but the third-party clients (which run alongside the original QT client) are easier. The one used for the purpose of this review is based on Unity3D, a free-to-use game engine popular among indie developers. It’s notable for its portability to multiple platforms—both desktop and mobile—which allows you to play Huntercoin on Windows, Mac, Linux, and even Android if you configure your network properly.

Another notable alternative was created by MithrilMan, and adds some useful gameplay features. Players can estimate the number of HUC they’ll collect following a given path, which aids the decision-making process; as in the Unity client, they can also see the moves issued by other players on the blockchain, which removes a primary advantage held by bots and hackers. Most useful, however, are the automated behaviors, which can command your Hunters to the nearest bank in case you go AFK.

These third-party efforts are promising, but the most exciting development underway is the Huntercore update. By implementing the latest Bitcoin Core code, it will reduce the required download size of the Huntercoin blockchain to less than 800 MB. This will make trustless mobile clients possible, rather than relying on a central server as others like blockchain.info do.

Overall, this project has a lot of potential, but still feels like a prototype. Blockchain gaming fans should keep their eyes peeled for the mobile and web versions, which should propel it to the major leagues.