In a podcast, Charlie Lee now reveals that he thought Litecoin (LTC) would surge above $1000. All the same, by profitably exiting at the height of the Great Bull Run of late 2017, he reaped huge despite all the criticism from the community. At spot rate, Litecoin (LTC) is up 6.1 percent in the last week.

Year-to-date, Litecoin, and Binance Coin are perhaps the top two performing assets with triple-digit gains. However, it is the founder Charlie Lee who lights up the scene as he supports the coin. Even so, note that the co-founder did liquidate a big chunk of his LTC holding, selling at the peak of late 2017 super rally while simultaneously issuing a warning to Litecoin (LTC) investors urging them to invest if they are ready for a 90 percent plus drop. True to his words, Litecoin (LTC) and the crypto market, in general, slid, with altcoins losing more than 85 percent of Dec 2017 prices.

We discuss the early days of Coinbase, why he originally built Litecoin, how crypto evolved over the last decade, what the current challenges are, and where Charlie sees BTC & LTC going in the future.

Nonetheless, leading in the recovery is Litecoin. Although Charlie Lee now admits that he thought the coin would rally to $1000, it is the coin’s hash rate that is improving by the day. There are several factors behind Litecoin (LTC) resurgence. One of them is Bitcoin’s prices bottoming up. As they have a positive correlation, the rise of the former mean Litecoin stands to expand. However, it is early August Litecoin halving that is drawing demand for the asset as investors prepare for scarcity. 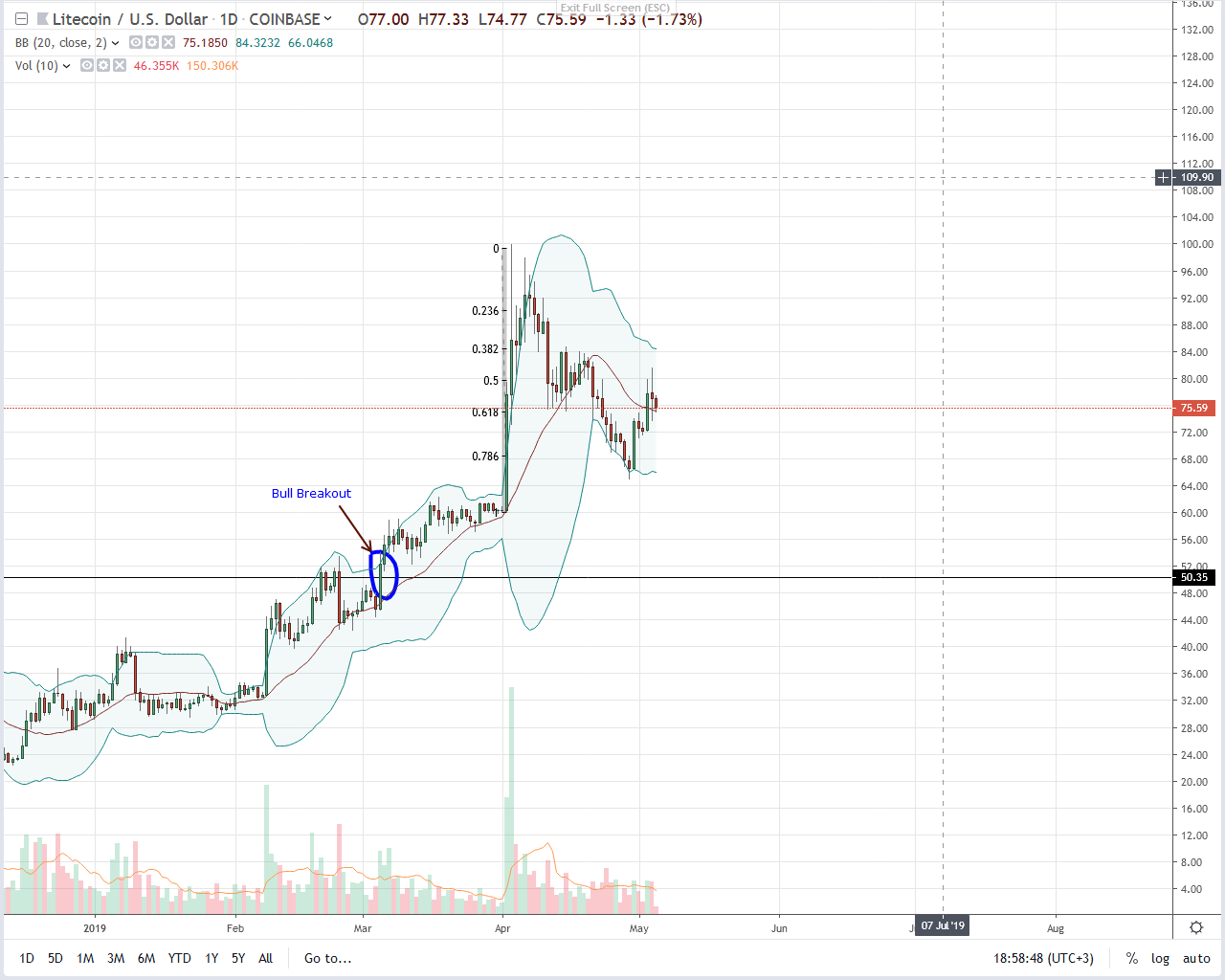 Price wise, Litecoin (LTC) is up 6.1 percent in the last week. From price action, bulls are in charge as long as prices are trending above $50. Since buyers are in control after reversing losses of Q4 2018 and the sell-off from mid-April to early May did cool off prices, traders can load up in dips with first targets at $100, our next resistance level marking Apr-3 highs.

Buyers are back thanks to the Apr-30-May-1 double bar bull reversal, and with the reaction from the 78.6 percent Fibonacci retracement level of Apr-2-3 high low signaling trend continuation, traders should fine-tune entries in smaller time frames as they aim at $100.

From above, May-3 bull bar is our anchor. With above average volumes—216k versus 174k, the candlestick confirms the double bar bull reversal of Apr-30-May 1 while simultaneously triggering buyers—waiting for Apr-2 mirrors—into action as the next leg up towards $100 is likely in motion. However, for buyers to be in control, then volumes clearing the $80 mark must be with high volumes exceeding 216k of May-3.