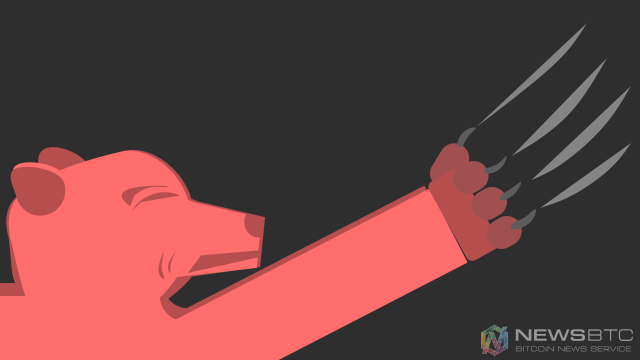 Bitcoin price recently made a downside break of a short-term symmetrical triangle consolidation pattern, indicating that bears are taking control.

Before pushing for more declines, a correction from the breakout move might take place, as sellers are keen on entering at better levels.

A descending trend line can be drawn to connect the recent highs of bitcoin price action and the Fibonacci retracement tool suggests potential entry levels.

Bitcoin price appears to be making a correction from the recent downside break, providing an opportunity for more bears to enter at higher levels.

Potential resistance can be found at the short-term descending trend line, which is right around the $385 level. This coincides with the 61.8% Fibonacci retracement level, which might be strong enough to keep further gains in check.

The 100 SMA is also close to this falling trend line and is below the longer-term 200 SMA, confirming that the path of least resistance is to the downside. A break above these dynamic inflection points, however, could show that a reversal is in order and that an uptrend might be underway.

Meanwhile, the 38.2% Fibonacci retracement level lines up with the former support around $375-380, which might also hold as an area of interest. This region could contain a lot of sell orders, possibly pushing bitcoin price back on its downward trajectory.

Both stochastic and RSI are indicating oversold conditions, which means that bears are taking it easy from here, possibly allowing a bit of profit-taking to ensue. This supports the possibility of a correction to the short-term Fibonacci retracement levels while sellers gather more steam.

However, a strong pickup in buying pressure could lead to an upside break past the trend line and moving averages, right around $395-400. In that case, bitcoin price could rally up to the next resistance at $465 then back up to the previous year highs at $500.

Recent market developments, however, suggest stronger demand for the US dollar. After all, the FOMC hasn’t wavered from its tightening bias, although it has expressed some degree of concern regarding the slowdown in the global economy.

In any case, the US dollar could stay strongly supported against other assets like bitcoin, given the risk-off financial sentiment and the continued improvement in the US economy. While the US currency retreated upon seeing downbeat durable goods orders data yesterday, the FOMC remains the most hawkish major central bank, which is enough to support the dollar’s safe-haven status.

With that, the path of least resistance for bitcoin price is to the downside, even as small corrections have been taking place owing to market volatility.